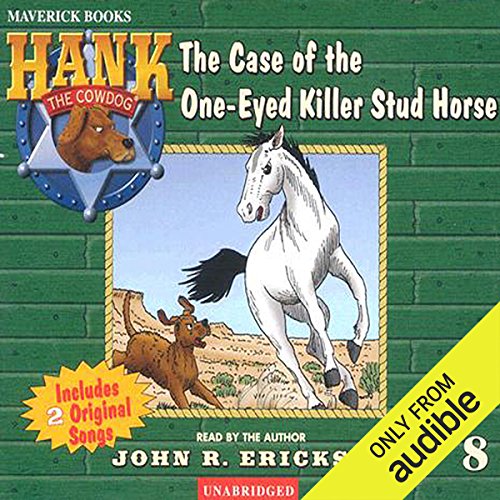 An eye for an eye. Things are looking pretty bleak for Hank the Cowdog. First he gets sick on poisoned bacon grease. Then he accidentally trips Sally May - and she ends up with a broken ankle. And if that's not bad enough, he gets stuck playing dress-up with Amy and Ashley, Little Alfred's cousins.

But when Tuerto the Killer Stud Horse breaks free and charges at the girls, Hank knows it's up to him to protect them. He'll show that one-eyed horse who's boss - even if it means risking his own life!

You'll hear two great new songs, "A Fundamental Disagreement" and "Thank You Lord For Making Gals", in this hilarious adventure for the whole family.

I love the audiobooks even more than the books! We listen to these on the way to and from the family ranch

best regards to your website and best book ever.

I just wanted to say that I can't stop laughing. 😂😂it was soooo good loved it.

I love this book it's so cute and funny 😂 I am 11 and listened to it with my ten year old cousin and we agreed that our favorite part was when Drover said " I still don't see the numbers. I would recommend this book to anyone and everyone who likes audible kids books

Hank the Cow dog is for all ages. I am never disappointed when listening to these amazing tales of Crazy Hank.

gals and more gals boys and not more boys

My kids love Hank! They look forward to every adventure. We has listened to this story three times this in the last month.

Great entertainment on a drive.

Almost had to pull over from laughing so hard. Played a couple parts over to enjoy again

I Grew up listening reading the book and listening to the audio tapes from the library was kid. My two kids love them, ages3 and 6

I found Hank the cow dog about six months ago and i recommend this book to every won I think Evan adults will like it.

this book is a classic for me and it brings back many childhood memories .