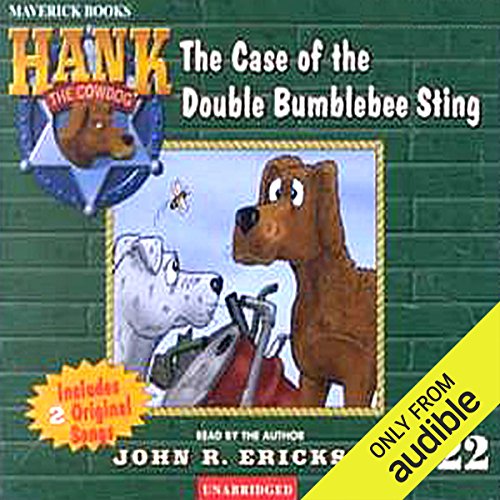 The Case of the Double Bumblebee Sting

The nose knows.... When Hank the Cowdog sticks his nose where it doesn't belong - into an old pipe behind the machine shed - he gets more than he bargained for. Before he can say "boy howdy", Hank gets a nip that sets his eyes a-watering and his snout a-throbbing.

Hank is sure that he's the unlucky recipient of a dreaded double bumblebee sting. But when his snout swells up and he starts feeling woozy, it seems as though it might be something much worse. No matter what, Hank's gonna need some help to survive - or his days as Head of Ranch Security will be over forever.

New songs include "I Was Bitten on the Nose by a Rattlesnake" and "Eating Bugs Is Lots of Fun".

A Superb Series - delightful for adults AND kids!

If you could sum up The Case of the Double Bumblebee Sting in three words, what would they be?

Funny. Funnier. Funniest!!
A delightful series of audio books that is narrated by the author who is also a marvelous voice actor. His stories are enjoyable to me, an adult, because of the humor, wit, spoonerisms and malapropisms. Adults and kids both are entertained by a delightful plot and just durn good story telling! And, boy, does he get into the mind of a dog!! If you love dogs you will LOVE these stories!!

My Son Laughed His Heart Out!!!!

My son loved these books but this one had him rolling. You won’t be disappointed with this Hank adventure!