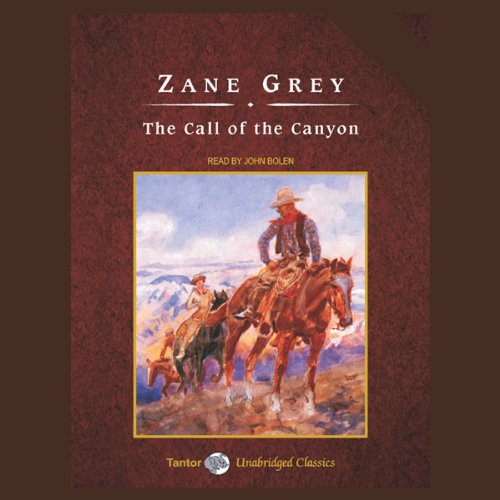 Carley Burch, a beautiful young woman, must leave her glamorous high society life of New York to follow her fiancé, Glenn Kilbourne, to the rugged, wild West. She braves fierce ruffians, brutal elements, and lack of civilization in an attempt to reclaim him. Glenn, suffering from shell shock and the betrayal of his country following World War I, had moved west to recover. He then fell in love with the West and his perspective on life was changed forever. Glenn now finds his previous high society life repulsive. Can Carley adapt to the rigorous life of the West? Will she be able to convince Glenn to return to his "home" in New York? Will she be in time before a rival temptress steals Glenn away?
©2000 Tantor Media Incorporated

Cosa pensano gli ascoltatori di The Call of the Canyon

I don't usually enjoy fiction audiobooks, but this one was captivating from the beginning. I listened while driving back to Los Angeles from my trip to Sedona, and the landscape of my drive fit perfectly with the descriptive story. As someone who gets bored easily with fiction audiobooks, I highly recommend this one as it had me enthralled for the entire 8+ hours straight. I also really enjoyed the voice actor.

This is one to put you to sleep. Nothing ever happens. There is no action and the reader just drones on and on.