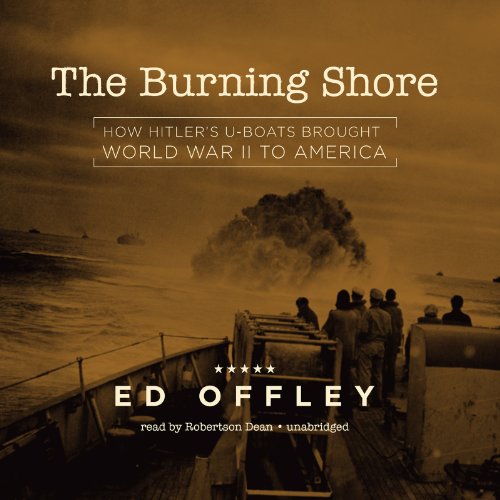 On June 15, 1942, as thousands of vacationers lounged in the sun on Virginia Beach, a massive fireball erupted from a convoy of oil tankers steaming into Chesapeake Bay. By the next day, three ships lay at the bottom of the channel, victims of Lieutenant-Commander Horst Degen and his crew on the German submarine U-701.

In The Burning Shore, acclaimed military reporter Ed Offley presents a thrilling account of Degen's rampage along the American coast and of US Lieutenant Harry J. Kane's quest to bring him down. Since the beginning of 1942, German U-boats had prowled the waters of the Atlantic, sinking merchant ships and threatening to sever the lifeline of supplies flowing from the United States to Great Britain. But when Kane and his crew spotted the silhouette of U-701 offshore that summer, the ensuing clash signaled a critical turning point in the Battle of the Atlantic - and the beginning of an unlikely friendship between the two rival commanders.

A gripping tale of heroism and sacrifice, TheBurning Shore describes how a small band of mariners and aviators drove Hitler's wolf packs from America's home waters.

I don't know about this one? Robertson Dean is one of my favorite narrators and he honestly was one of the factors that made me consider this book. For this subject matter, however, he didn't manage to improve the book at all. In fact, his deep voice made the listening heavy due to the writing style of the author. I struggled to get to the end of the book and have dabbled with the idea of returning it, but I have mixed emotions. There were some good parts that were interesting, but the author makes it read like a statistics lecture after each story or vignette when he lists out the exact amount of tonnage sunk for each sub and each merchant ship. It's not that he gave the information, but the manner in which it was delivered was simply robotic and very annoying. This is particularly disturbing because it overshadowed the human factor which is the most important point. I think I'll give this book one more listen to see if my opinion changes, but I couldn't in good conscious, recommend the book at this point. So, unless you specifically want a book about German subs, listen to The War Below by James Scott I assure you it will not disappoint.

excellent listen that links 2 stories to make an easy listen ! I liked how the author wrote from the German and Allies sides to make a great part of American history that many people dont know about.

the narrator is superb and the story very engaging. if you're at all interested in World War II, the battle of the Atlantic, or submarines then this book is for you.

Story: This book is a good exploration of the war in the Atlantic. It explores the lessons learned, stubbornly, before the adoption of British methods to include the convoy method for the merchant marine to Great Britain. As always, it is amazing when people turn down help when everything else is not working.

It was a good story

After reading "Torpedo Junction" by Homer Hickam, I was hoping this book would have more "local" history of the outer banks and U-boat operations during the war. The overall story was good and it kept me interested, but I think I went into it with different expectations. I'm glad I purchased it and learned about the events.
My only suggestion would be to go into it with an open mind and enjoy the story.