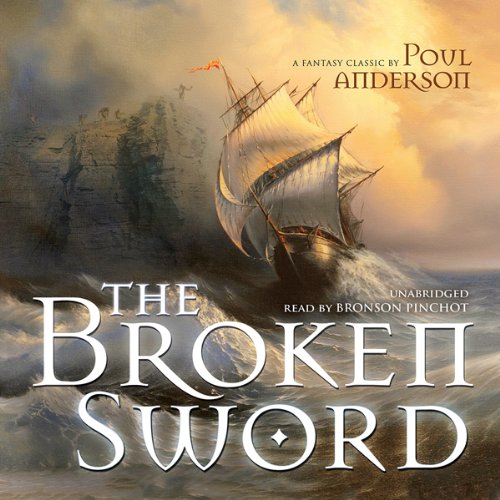 Thor has broken the sword Tyrfing so that it cannot strike at the roots of Yggdrasil, the tree that binds together earth, heaven, and hell. But now the mighty sword is needed again to save the elves in their war against the trolls, and only Skafloc, a human child kidnapped and raised by the elves, can hope to persuade Bölverk the ice-giant to make Tyrfing whole again. But Skafloc must also confront his shadow self, Valgard the changeling, who has taken his place in the world of men.

A spirited homage to old myths

In The Broken Sword, Poul Anderson mines the same Nordic/British myths and folklore that Tolkien did, and tells a rousing, tragic adventure. An infant is born to a Viking warrior and his Christianized family, but a proud and haughty elf lord takes the child and leaves a changeling in his place. Thus, Skafloc grows up among the elves and learns their ways, while the half-troll-half-elf Valgard is raised as human, but becomes a savage, unruly warrior.

The plot isn’t too complex: the two warriors, who have a close physical resemblance, take opposite sides in a troll-elf war, and battle each other using magic, trickery, and might. However, a tragic twist comes into play, thanks to Skafloc’s ignorance of his origins and some intervention by Norse gods.

This isn't up with The Lord of the Rings in terms of depth of world-building, but it’s got a fiercer, darker spirit. Look for homage to all the traditional elements of Northern European myth: old gods who do not allow mortals to renege on a promise; aloof, immortal, fleet-footed elves, who dwell in ethereal castles and “know friendship but not love”; seductive maidens who aren’t what they appear; and big, ferocious trolls (who call to mind the roided-out orcs in Peter Jackson’s LOTR films). Though the description never gets too explicit (this novel was written in the 1950s), there’s plenty of larger-than-life action, treachery, black magic, ale-quaffing, bawdiness, and skull splitting. The Hobbit, this isn’t.

Fans of epic warrior sagas or the kind of blood-soaked faerie tales that are no longer considered suitable fare for children will eat this one up. Anderson's writing is faithful to the lusty descriptions of old epics like Beowulf, but not as dusty-sounding. You can practically hear the war horns blowing and the swords ringing. Audiobook narrator Bronson Pinchot might overact a bit here and there, but that's in keeping with the tale’s energy.

I had forgotten how awesome this book was. It's Anderson's fantasy tour-de-force and, in the end, I think the scope gets away from him just a bit. It seems almost too grand for such a short book, but damn if he doesn't pack in an immense amount of world-building, characterization, and just all-around cool factor.

You should read this book if:

• You are a fan of Moorcock's Elric novels. You will see CLEAR inspiration in here without getting the sense that Moorcock ripped Anderson off.

• You love the dark ages history and legends/folklore of the Scandinavia, England, Ireland, and Scotland.

One of the most interesting things for me in this reading (my second time) was simply Anderson's language. I listened to it as an audiobook (the Bronson Pinchot reading is great) and was amazed at how often Anderson wove the alliterative nature of old English verse into the text itself. I mean, aside from the actual short verses uttered by the hero (or is he?) of the novel.

Also, when I first read this novel as a teenager, I took a pretty simplistic view of it. Skafloc is the good guy, Valgard is the bad guy. With this reading I realized there is a lot more grey in this novel than you might think. I started to think of Valgard as a kind of Frankenstein's monster. A changeling created by the elf Imric and left to its own devices -- having troll blood that it doesn't understand and a fate it can't escape. It makes Valgard pretty tragic, actually, and explains some of his hideous acts (which are almost always done in a fit of troll-blood rage and with some sense of remorse after the fact). On the other hand, you have Skafloc, who is like Oedipus, trying to force his will on a situation that is a real minefield. Learning the truth and employing his birth right are the twin forces set to destroy him, and it's his indomitable will that brings them into play.

All in all this is a straight-up kick ass read. Lots of levels. A ridiculous amount of awesome. Probably in my top 10 fantasy novels of all time.﻿

I got this book because it was narrated by Bronson Pinchot and the plot sounded interesting. However, I had no Idea how great this book was going to be. It was originally released in the 1950's. However, there is no way you could tell, because the story and the setting are timeless. The narration was first rate Mr.Pinchot never disappoints and the story had me enthralled. If you like lord of the rings or fantasy in general you should pick this one up.

Listening to Poul Anderson's The Broken Sword was a powerful experience. Anderson wove elements from Norse, Anglo-Saxon, and British mythology and legends, Viking history in England (when Christianity was inexorably spreading and converting heathen), Faerie (elves, trolls, and the like sharing the world of mortals but usually remaining just out of sight), and his own imagination to write a bleakly beautiful, horribly heroic, and bloodily tragic epic fantasy novel. Because it was first published in 1954 and draws on similar sources, The Broken Sword is often compared with The Lord of the Rings, but it feels closer to The Silmarillion, for Anderson's novel has a similarly deep sense of beauty, irony, fate, time, and tragedy (as well as similar manipulation of mortals by gods, incest, flawed "heroes," mortals mixing with immortals, and the passing of a wondrous age). But although Anderson's novel features epic language with Anglo-Saxon-esque alliteration and poetry, as well as archaic words (fey, ere, twain) and syntax (savage was the battle), it is a straight-forward, action-packed, and rawly human read. Anderson's doppleganger heroes, the elf-raised Skafloc and the human-raised changeling Valgard, are prey to all-consuming valor, hatred, and love. The broken sword is a compelling artifact, evil, charismatic, powerful, and treacherous. Bronson Pinchot gives a grand performance; from the disturbingly quiet elf-lord Imric to the ominously deep voiced troll king Illrede, all the characters come alive, full of their crafty manipulations and overwhelming passions. The vengeful witch negotiating with Satan for aid, Freda's dead brother revealing that she and Skafloc are siblings, Valgard telling his elf-lord father Imric why he hates him prior to torturing him, Odin explaining to Freda what he wants from behind her girdle, in such scenes Anderson's writing and Pinchot's reading combine to make unforgettable dark epic fantasy magic.

Poul Anderson has woven a rich tale from Norse myth. The style and pacing are excellent. Anderson has created a tragedy of Shakespearean proportion and knowing from the first page that it will all end badly, you are still swept away with the story and can't stop. Pinchot is truly one of the best readers and his style well matches the story. I had read the novel 20 years ago, but Pinchot's reading brought to the story new depths I had not realized.

A very good story with a stellar performance

The headline says it all, really. This comes from a different period in the genre than a lot of fans are probably used to, so it's less interested in setting up an epic twisty pot than it is in presenting sympathetic characters on all sides of its conflict. Depending on what you want from the genre, it might not be for you, but this is a very good book that falls just short of great. Pinchot's performance is beyond reproach here. He really gets the prose's rhythms and the emotion behind the story. It's probably one of the best readings I've ever heard.

This is a real treat for audible listeners!

If you like greece mythology with all it's drama your are going to love this story.

It is a lovely fast-paced story with Gods, trolls, fairies, love, war and magic!

Bronson Pinchot does and FANTASTIC job narrating this story, I've never heard a narrator scream before <3 Bronson really makes a the characters and story come to life!

If you are having a hard time finding a good audible book, look no further. You just stumbled over a great story! And a great narrator!

A novel with the power of a myth.

This is a great blending of gritty historical dark ages with elves and trolls, gods and giants. These aren't the elves from Tolkein, they are amoral, child-stealing immortals. And these are the

What was one of the most memorable moments of The Broken Sword?

Imric, the Elf-earl, learning of the unbaptised child, racing home to make the Changeling.

Strong narration. Excellent tone to match the mythical tragic themes of the story.

In the last days of Faerie and the Old Gods, what is the price of True Love.

Not Even for Free

Seriously who thought this was worth making into an audiobook? it's a tedious listen, didn't, couldn't finish this trash.

The author used a lot of filler words. Remove most of the unnecessary adjectives the book would be shorter and more entertaining. It had potential.

Use a British English speaker rather then an American one.

Would you be willing to try another book from Poul Anderson? Why or why not?

I like Poul Anderson and have read very many of his books, so I was looking forward to this.

This is supposed to be an English faery tale. I could overlook the American accent of the narrator - just - but the moment he tried to imitate an English accent was like being hit with a bucket of icewater. Very, very poor.

Don't know - I had to give up after just one chapter.

Moving like no other book I have ever read

I don't know what say about this story.it caught my imagination like no other...
I hate it has finished
Loved the main characters
And the battle and woe story victory ,doom , hate and love