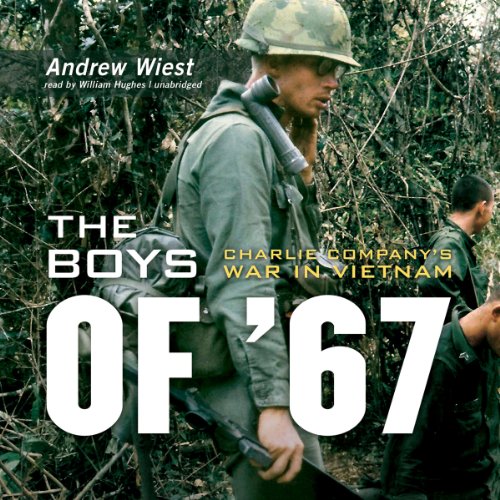 When the 160 men of Charlie Company were drafted by the US Army in May 1966, they were part of the wave of conscription that would swell the American military to eighty thousand combat troops in Vietnam by the height of the war in 1968. In the spring of 1966 the war was still popular, and the draftees of Charlie Company saw their service as a rite of passage. But by December 1967, when the company returned home, only thirty men were not casualties - and they were among the first veterans of the war to be spit on and harassed by war protesters as they arrived back home.

In The Boys of '67, Andrew Wiest, the award-winning author of Vietnam's Forgotten Army and The Vietnam War 1956-1975, examines the experiences of a company from the only division in the Vietnam era to train and deploy together in similar fashion to World War II's famous 101st Airborne Division.

Wiest interviewed more than fifty officers and enlisted men who served with Charlie Company, including the surviving platoon leaders and both of the company's commanders. In addition, he interviewed fifteen family members of Charlie Company veterans, including wives, children, parents, and siblings. Wiest also had access to personal papers, collections of letters, a diary, an abundance of newspaper clippings, training notebooks, field manuals,condolence letters, and photographs from before, during, and after the conflict.

As Wiest shows, the fighting that Charlie Company saw in1967 was nearly as bloody as many of the better publicized battles, including the infamous battles of the Ia Drang Valley and Hamburger Hill. As a result, many of the surviving members of Charlie Company came home with what the military now recognizes as post-traumatic stress disorder - a diagnosis that was not recognized until the late 1970s and was not widely treated until the 1980s.

Only recently, after more than forty years, have many members of Charlie Company achieved any real and sustained relief from their suffering.

Most of us have seen the multitude of Vietnam war movies and get an inkling of what it must have been like to be a soldier in Vietnam. However, what many of those films do not tell is the story of what happens to these men after the war. This book tells both the gripping accounts of combat as well as the far lengthier aftermath and takes the reader on a real journey following a group of men from training to retirement. Along the way we become familiar with the collection of characters that populate this book and we can better appreciate the true band of brothers that the bonds forged by deadly combat and the hardships of war create.

Initially I was wondering if I had made a mistake purchasing this book given the lengthy and quite extensive cast of characters the author introduced. There were too many to keep in my head and names became lost in the list of men being introduced into the story. To begin with I saw this as a negative aspect of the book thinking that the author has focused on too broad a group of men to be able to deal with but as the book progressed the names began to stick. Even if I forgot from time to time who was being discussed, the author would helpfully repeat something about them that helped place them in the readers mind. I have to say that I am very pleased I stuck with this book.

After the men have been introduced, we swiftly move on to basic training and there are plenty of amusing stories which help to cement the various men into a band of brothers rather than disparate people. Then comes the baptism of fire as we go on patrol with Charlie company. Harrowing and often sad accounts of battles are told here that really immerse the reader into the combat by some excellent writing. I was literally unable to put this book down due to the compelling story being told here. There are so many touching stories of bravery, fear and all the other human factors that play out on the battlefield that really illustrates how much these men endured.

The second part of the book is just as enthralling as the author traces the often troubled lives of many of the men who survived Vietnam only to continue their suffering.

A truly amazing read and one I'd recommend to anyone.

massively harrowing at times but wonderfully positive and uplifting. Really makes you wonder why veterans were so badly neglected by their country.

great story's about the lost war .So sad but uplifting . true life events that put your mind there God bless

Loved this, the story was heart wrenching at times. Particularly as you get to know the characters and understand their hopes dreams and motivationa. Then dealing with their death feels personal. A no holds barred account detailing everything from execution of VC prisoners to the treatment of vets when they arrived home to the PTSD. My only criticism was that in the early chapters a lot of time was given to getting to know the characters (from the parental history to how they met their wives etc) . While very important it could have been summarised in brief and would have sped up there narrative. Turn up the playback speed for that chapter if you feel it gets tedious.

just finished this book what an eye opener. not the normal blood and guts story that I think must people would expect about Vietnam but real people talking about real lives.
with all the horror of war and loss and the misunderstanding of what went on this book tells a story of hope and survival and friendship of men who served there country and paid a terrible price

Another great book about Vietnam. First book that made me research the 9th ID. I do recommend

Absolutely brilliant, a must read, listen

This book was well thought and well put together. I'm pleased that the author told a story about each person in the book, you learnt something about them before going into service, while in service and the aftermath of war. My son will read, listen to this book to ensure his generation knows the Vietnam war and how during this was a country turned their backs on service man. I'm pleased to see this has changed today.
Retired service man.

Really detailed insight into what they went through in Vietnam. I thought very well told. defiantly a good listen.

very good, the right lengthen and an insight to a war i know nothing about before.

five stars, real insight into life in a combat unit and what happens when you go home to the world