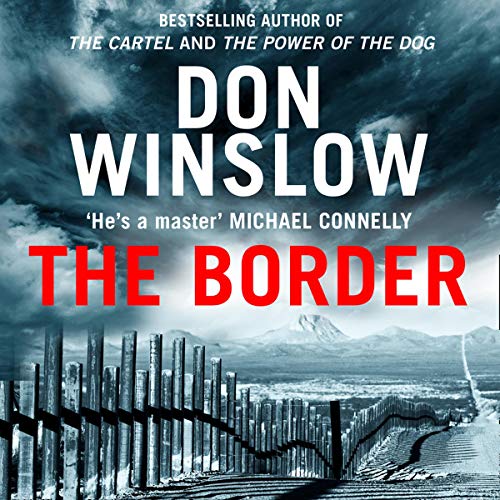 The explosive, highly anticipated conclusion to the epic Cartel trilogy from the New York Times best-selling author of The Force.

The war has come home.

For over 40 years, Art Keller has been on the front lines of America’s longest conflict: the War on Drugs. His obsession with defeating the godfather of the Sinaloa Cartel - Adán Barrera - has cost him people he loves, even taken a piece of his soul.

Now Keller is elevated to the highest ranks of the DEA, only to find that in destroying one monster he has created 30 more that are wreaking chaos in his beloved Mexico. But not just there.

Fighting to end the heroin epidemic scourging America, Keller finds himself surrounded by an incoming administration that’s in bed with the very drug traffickers that Keller is trying to bring down.

From the slums of Guatemala to the marbled corridors of Washington, DC, Winslow follows a new generation of narcos, cops, addicts, politicians and mere children fleeing the violence for the chance of a life in a new country.

A shattering tale of vengeance, corruption and justice, The Border is an unflinching portrait of modern America, a story of - and for - our time.

"The year’s best thriller." (Sunday Times, Books of the Year)

"One of the great literary achievements of the century so far." (Daily Telegraph)

Loved the story and characters and the historical twist. If your like Narcos, you are on for a treat.

Loooooong.
But so well written and so well read that I couldn't stop listening. I constantly wondered if this wasn't a documentary after all.
And the not so well hidden reference to a certain real estate mogul and president joke made me both fear and hope it was true...

Definitely the best book in the series. The complexity of several story lines is amazing. Although not without a clear political agenda by the author.

The trilogy that beats them all

So sad to have this trilogy come to an end, or is it? This novel wraps up the story of Art Keller and his own war on drugs, and the tragedy of it all. A perfect book? Not unless you’ve read the first two - then it’s sublime, heart wrenching and beautifully written and narrated. Amazing.

Loved The Gentlemen’s Hour, Cool Breeze and the first two of the Dog series but I guess I just had enough of the same scenes and characters and lame subplots being endlessly replayed to solve a missing narrative. DW is gifted and skilled but has gone he way of all series burnouts into tedium and repetition.

When will we learn?!?

I read the three books after each other. I suggest readers todo the same. Great story line! I truly was fascinated by the overall knowledge of the author.
The three novels have convinced me even more that we use an incredible amount of energy to win a war that is similar to the failed war on alcohol just decades ago. Waisted energy. When will we learn?!?
I wish the world would legalize drugs so we could stop the madness we are in for such a long time.

an absolute masterpiece and the best performer

I literally walk my last few weeks with Ray Porter reading incessantly in my ears this amazing trilogy. I couldn't put down the earphones. These books are a tale of war, an extended lesson of history, a picture of violence of horror, despair, degradation, corruption, sadness, but also of hope, love attempts at redemption. A gigantic fresco which in bright colours describes the history of a quite senseless "war on drugs" which very few people have dared to pose the right fundamental questions.
I'm surely going to read it again, this time on "real" books, for is practically impossible take all the stories, the lives and retains all of them as this total masterpiece deserves (and I mean all the three books togeter: The Power of the dog; The Cartel, and the insuperable final The border).
A note on Ray Porter: if I were Don Winslow (or John Connolly Michael Connelly, Robert Crais, Robert Littelor Dennis Lehane, for that matter - to cite my favourite authors) after listening THIS PERFORMANCE, I would never, NEVER, accept anyone else reading my books on audiobooks. Astounding. Listening to Ray Porter you're practically watching a movie in Dolby theater with a 4k high definition colours.

should be required reading for anyone

who wants to know about the failure of 50 years of war on drugs! a monumental series!!!

Captivating story
The reader is beyond excellent
Highly recommended, as are all Don Winslow’s books.

A tough book on drug wars

If one liked the two first chapters of the trilogy (The power of the dog & The cartel) he will not be disappointed by the this third episode. Sharply written , but a bit repetitive, the book is at times too long and needs a good editor. However ,if you "get into it", you will become addicted.

The combination of Don Winslow's words, and Ray Porter's voice make this an exceptional experience.
Please make The Power of the Dog, and The Cartel, also available on Audible, preferably with Ray Porter narrating them.
This trio of powerful stories is too good not to be available as a set.
Don Winslow is an outstanding writer, and Ray Porter has made a masterful job of this narration.
I cannot recommend this production highly enough.
Thank you.

Don't be put off by this being 3rd in a trilogy - the author skillfully paints the picture of the first two books over the opening two hours or so.

Almost 30hrs flies by in a blur of intricate storytelling and wonderful performance.

This book is so good I have written my first review in over 70 audible audio books. The only downside is that the first two books weren't on audible.....sort this out please.

The power of the dog trilogy are a fantastic read, and would be a fantastic listen in their entirety. Anyone finding this book without the other 2 is missing out. please Audible UK, do the right thing

This is the first Don Winslow novel I have read/listened to and have to say both the story and the narration were excellent.

I can only hope that Audible commission The Power of the Dog, and The Cartel with Ray Porter narrating asap.

Winslow writes a brilliant story I love the characters and felt like I was there listening to the narrative . great book of a trilogy of gory real life in South America often heartbreaking but I bet it is as real as it gets....

A fitting end to a hugely rewarding trilogy…

I have nothing but respect for Don Winslow’s writing and The Border was no exception. I was sorry it came to an end but have no doubt that I shall return to the trilogy again in the future. My one great regret is that Audible have managed to produce only the final volume of the three which, sadly - with my failing octogenarian eyesight - will mean a struggle with the written word for Power of the Dog & The Cartel. Please, please, Audible, rectify this sad situation!

This book is beautifully written and superbly read read by Ray Porter. At over 29 hours it is truly a tour de force of sustained brilliance. With Art Keller at the moral heart of the story it is a pitch perfect conclusion to an amazing trilogy. Fans of the current USA administration might find offence in some of the plot points but lovers of strong fiction that relates to current events will love it. Don Winslow has now completed his magnum opus and I would love to see what Netflix might be able to do with it as an alternative perspective to Amazon's 'Jack Ryan'.

Brilliant conclusion to the trilogy

Beautifully told by the narrator this is the most powerful and absorbing novel of the Cartel trilogy by Don Winslow. I didn't think the other two novels could be bettered but boy, was I wrong. Simply stunning narrative. I cannot recommend this novel highly enough.

One of the best books I've listened to in a very long time. Completely engrossing.

This book is EPIC. In sheer size, scale, subject matter and scope, and it really managed to convey the drug cartel story from all sides. I so enjoyed listening to it and hearing about this from every which way. The detail was faultless and the storyline gripping and cleverly conveyed. Fabulous book be Don Winslow and complete acknowledgment to the astonishing narration of over 20 hours (not sure exact amount). Ray Porter narration was heartfelt and engaging. Definitely a must listen