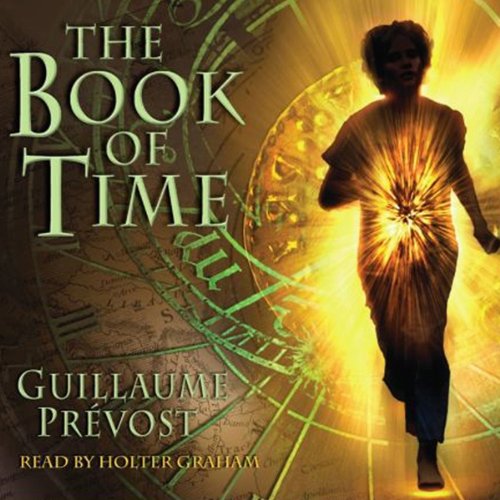 The Book of Time

A statue, a coin, an old book - they look as dusty as everything else in the Faulkner Antiquarian Bookstore. But when Sam Falkner slips the coin into the statue, he's swept back to Scotland in A.D. 900 - the age of the Vikings. He must find both the statue and another coin in order to escape. It's the first journey in an adventure that will take him to ancient Egypt, World War I, even Dracula's castle...and a mystery that will end only if Sam can find his father in time - literally.
©2006 Gaillimard Jeunesse (P)2007 Scholastic, Inc.
Vita familiare Storiche Narrativa storica Azione e avventura Fantascienza Polizieschi
Mostra di più Mostra meno

Sam’s father has always been a bit odd, and in the years since Sam’s mom died, his dad has become even more unpredictable. It’s not unusual for Sam’s dad to disappear for a few days without warning, and as The Book of Time kicks off, Sam figures his missing father is on another of his spontaneous travels. It turns out Sam is half right: his dad is travelling – time travelling. In search of his father, Sam sets off through the ages, visiting medieval Scotland, World War I France, ancient Egypt, and even Dracula’s castle. Actor Holter Graham delivers stunningly versatile character acting, personifying wounded French soldiers, ancient Egyptian thieves, and vicious vampires. Graham’s gift for storytelling is underscored by his emotional authenticity and suspenseful pacing.

This book was a lot of great fun, with an excellent story line with some mystery to it. This is one that would be great for all ages! Well worth a download!

The book itself was fine BUT

This book ends in a cliffhanger. This would not be a problem if the other books were available; however they are not. You can purchase the sequels in book form but not in audio form. If you want to be left hanging by all means purchase this. For me; it was a total waste, as I don't read paper books any longer. Just Kindle and Apple, a format that these books are not available on. Oh well, a royal waste of time......

Great read for my 6th grader

Getting my son to read is like pulling teeth. He is not a big fan of fiction....however, because the events in this book are based on actual history, he liked it very much. The narrator was a perfect choice as well. He'd like to read more by this author.

At the start of the book I got a bit confused due to a few things happening too quickly, but it didn't take me long to sort out the confusion. The story was good. I really liked the different points in history that he went to and the great detail involved. I was impressed with the attention that was given to even the smallest details when time travelling.
The narrator did an awesome job as usual. I have yet to find a better narrator than Holter Graham. He really made the characters sizzle for me.
There are quite a few intense, edge of your seat moments in this book. I really liked it and was so anxious for the boy to find his father.
My issue with the story that made me so frustrated, and the reason why I gave 4 stars for story and overall, is the ending. I was majorly disappointed with the ending!! First thing I did was to check if there was a sequel...did not find one. The ending leaves you hanging on what I thought to be a big piece of the plot. I'm hoping the author is planning another book to pick up where this one left off so that we can get a conclusion to what was left unresolved.
Yes, I really liked this book. Hated that such a big piece was left unresolved. I can only hope it will be resolved in the future.

Narrator is amazing. He really brought the book to life. The story itself was well thought out and thrilling. I enjoyed taking this journey with Sam. I want book two!

This is a great start to the trilogy. It is a shame the other two books aren't available in audio format.

Buyer beware: YA w/ cliffhanger and no sequel

okay story, but did not realize it was YA when purchased. i enjoy the reader so did not pay enough attention to description i guess. strange choices for time travel.

Great story and narration. Hope there is a continuation on audible books. Will look for it.

Story started slow. Was more of a history lesson than time travel story. But just as it started (finally) to get interesting, it ended. Or didn't end. 6 hours of listening without a wrap up. I purposefully look for books that are NOT in a series just for this reason.