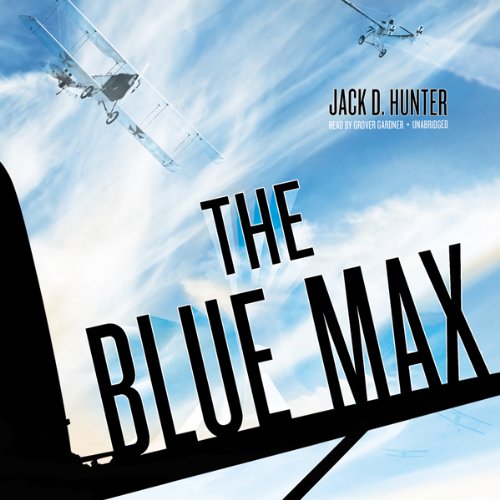 The most coveted combat decoration in all Germany, the Blue Max was a symbol of power, fame, and prestige beyond the reach of ordinary mortals.

Bruno Stachel is a nobody, a newly recruited junior officer in a First World War combat squadron. But he is determined not to remain a nobody for long. He has his sights on the Blue Max, the most coveted of all German decorations, and he will do anything to get it. From the very moment he shoots down his first plane, everything he does is aimed at that goal.

This world-famous novel of deadly combat in the skies tells the story of the men who killed for the Blue Max - and died for it. It tells the story of Stachel - murderer and alcoholic. His meteoric rise to glory alienated him from his fellow pilots and, ultimately, from human decency. Then there is Kettering - collector of pornography. He became the victim of Stachel’s ruthless ambition. Also, Von Klugermann - the haughty aristocrat. He delved too deeply into Stachel’s torment, only to discover a cobra. And finally Kaeti - the woman who knew them all. Arrogant noblewoman, black- mailing nymphomaniac - and Stachel’s beautiful mistress.

©1964 Jack D. Hunter (P)1995 Blackstone Audio, Inc.
Storico Spionaggio Prima guerra mondiale
Mostra di più Mostra meno
"Jack D. Hunter, who served as an American agent behind the German lines in World War II, writes with impressive authority about Germans and with absolutely astounding authority about the combat airplanes of World War I. His story moves fast and includes much tersely eloquent conversation." ( New York Times)
“[Grover Gardner’s] reading…proves effortlessly engaging as the listener becomes absorbed in a story so well written that it needs little interpretive assistance. [Gardner] is one of those readers who can become transparent, leaving no distinct impression of themselves, only the text. This is no small accomplishment, requiring as it does an execution free of any distracting flaws.” ( AudioFile)

This book is probably thought of as a WWI aviation thriller--which it is, for sure. It is also an incredible study of a highly functional alcoholic and a great supporting cast of complex characters in a most highly charged situation.

So well written that a reader almost forgets the larger tableau of the Great War. Sides blue and although a fair, studied portrait of German cultural makeup is a part of the development, the reader must see it all through the eyes of the main character. The disturbing prism of the peculiarly flawed eyes keeps the reader from ever seeing this protagonist as archetypical 19 year old growing up too quickly.

One of my favorite characters ever, Bruno Stachel has been a part of my life since 1968.

I cannot recommend this novel highly enough and will always highly admire Jack. D. Hunter.
I also have not heard an audio book performed by a single reader that I rate higher than Grover Gardner's strong interpretation of Hunfer.

The main character does bizarre and tragic things. Set against the evolving air war in wwi it was a really interesting story in a very interesting time and place. the action was pretty good but descriptions of air combat were a little hard to follow. Likewise german names were different enough but the cast of characters became a little muddled. I was hoping for more of a redemption arc that didn't really deliver. But hey that's alcoholics. Lastly some of the language on the nature of alcoholism seemed to be borrowed whole cloth from a certain book that was published some 20 years after the events described which felt awkward if you're at all familiar. A good listen and the performance was top notch.

a great and entertaining story, involving and alcoholism all characters are fully developed and believe.

I was surprised that the book is so far removed from the fine adaptation that the movie of the same title portrayed. Both worth a try.

I've seen the movie based on this book a number of times, even own a copy of it. I always enjoyed all the flying scenes. Now that I actually read the book I have a whole new appreciation for it. There's so much more going in all the characters and dialog is outstanding! I laughed out loud a number of times at some of saying that each character came out with. Overall a excellent story and I highly recommend it. On top of all that the presentation by Grover Gardner is unparalleled! I often choose books just because he's narrating the book.

A damning view of humanity.

I struggled on how to rate this book. I remember watching part of the movie when I was younger and it leaving such a distaste I didn't even finish it, but I couldn't remember why. Reading the book, I now recall. I have always been a fan of the anti-hero, but the characters in this book are so flawed and morally bankrupt they go well beyond the anti-hero mark. It takes a great writer to make a character completely lovable to the reader and possibly still an even greater writer to make a character detestable. This work of fiction though goes so far as to compel the reader to disdain the "protagonist" and wish him death at every engagement. A masterful bit of writing, but with no real relief in the way of fully developed characters who are "decent" human beings. It does leave on wanting at the end I feel. Thus the reason I am torn on my appraisal of the book. I know it took great skill to weave the dark tale, but it seems to be lacking in redeeming features. It is well read though.

Anyone who loves WWI history, especially aviation history, will love the details
Anyone who has struggled with alcoholism will recognize the powerful and painful journey told within as well