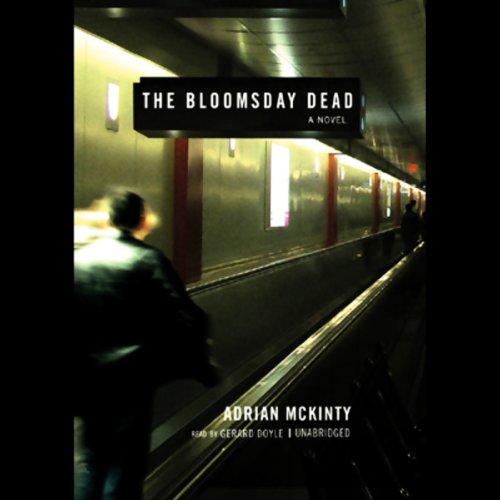 Michael has survived his infiltration of an IRA splinter cell in Boston, and now, his many near fatal wounds healed, he begins his next adventure as manager of hotel security in Lima, Peru. It is there that he is contacted by Bridget, whose fiancé he killed.

Bridget, calling from Dublin, says that her 11-year-old daughter has been kidnapped. Michael's choice is to fly to Dublin and help her find the girl, or be executed at the hands of Bridget's goons, who are holding him at gunpoint. He agrees to nothing, but is soon on the way to Dublin, leaving the first two of many dead bodies in his wake.

After slogging through a number of adequate audible books recently, I jumped at the opportunity to acquire the latest McKinty. I was so taken with the first chapter that I called my husband when I reached the end of the first chapter just to revel in the fine writing and reading. Today, I hit my parking space near the end of the first download and sat in the lot until the chapter ended. There is absolutely no better combination of writer and reader in the Audible library!

If you have not listened to any of the other McKintys, do NOT start with this one. Do the "Dead" series in sequence.

Adrian McKinty has fast become one of my favorite authors and Gerard Doyle is a spectacular narrator. This third installment of the Michael Forsythe series is tremendous. It would be useful to have listened/read to the two prior installments, and absolutely essential to have read Dead I May Well Be before Bloomsday Dead. I will be in serious withdrawal until McKinty comes out with his next book.

Adrian McGinty stories are tornado-twisty! And Michael Forsyth is 'the' Irish super-dark-hero. You gotta' start this series with "Dead I May Well Be" the first in this epic. Oh, this book stands on its own bottom but you'll like it enough to want to read the other two in the trilogy only to discover that you began at the ending.

Some reviewers are shocked… SHOCKED! That Michael Forsyth and his hair-trigger mob buddies talk like men. If you are shocked… SHOCKED! By the way that men talk in ugly and dangerous situations… Well, go find a teenage romance novel or maybe a Disney story about unicorns and dancing bunnies, K? Sigh.

BTW, McGinty has the power to make you laugh out loud in complex moments. Oh… Of course I gotta' mention Gerard Doyle's narration… Okay… "WOW!" You got a better superlative? Fill it in here __________. Thanks.

McKinty and Doyle: a perfect pair

I have listened to every title that Adrian McKinty and Gerard Doyle have collaborated on as writer and reader. They are so perfectly suited as complements to each other, that I can not imagine one without the other.

It was going great.....until the last 30 seconds

This is the best of the series, and I really hope it isn't the last, but not just because I love the decent ex-gang member with a heart of gold and a sense of humour. Because the last 30 seconds of this book left us with an unrealistic and implausible "happily ever after" ending, and I would love to see what really becomes of the characters (Bridget, Michael, Siobhan) in the future. Happy, maybe, but not forever more, I'm sure.

But this book was written 10 years ago, so I know there won't be any more, and the Sean Duffy series (and some stand alone novels) are moving forward instead.

But don't let the last 30 seconds keep you from enjoying this great Northern Irish noir novel. Time has moved on and Michael goes to Belfast from his new job in Lima at the request of mob boss Bridget to help find her kidnapped daughter, with the promise that if he succeeds she will stop trying to find and kill him in revenge for his past deeds. Along the way, there are kidnapping attempts, murder attempts, killings, humour, and pathos.

As in the other McKinty books, the narration by Gerard Doyle is perfection.

This final Michael Forsythe book was just as exciting and action packed as the previous two books. I have thoroughly enjoyed this series and, as always, McKinty has done an excellent job with the character development and pacing of this book. This was an exciting listen and I couldn't wait to reach the final climax of the story. I enjoyed it immensely and definitely recommend it. The narration by Gerard Doyle is excellent.
I am not giving it 5 stars because I found the ending (the last few pages) rather ridiculous. It was very tidy and didn't seem true to what I knew of the characters McKinty had developed up until this point. It wasn't terrible, it just didn't fit for me.

A good end to a GREAT trilogy !

The Michael Forsyth comes –regrettably- to an end. Hardboiled, dark and with high doses of violence, this is not however the typical “noir” book. The main character (Michael Forsyth) -that sets, so to speak, the tone of the story- is “one of a kind” and a young man of his time : street-smart, instinctive, naïve, at times quasi-poetic, ruthless.
McKinty is a terrific writer . He creates marvelous sense of place and atmosphere and his characters are so amazing and well crafted that first surprise and then stay with you for a while.
I have enjoyed tremendously the book and have read it avidly. However, I must also say that this is the weakest episode of the trilogy. The book is fast-paced, too fast-paced actually, as if the author was in a hurry to get it done.
I need to move on to other McKinty books, hoping that they are as good as these ones.

Not as good as the 1st two, but still a must-read

I'll preface by saying that Dead I Well May Be and The Dead Yard are two of my favorite books of all time. I truly could not say enough about them.

So, the third book of the trilogy had a lot to live up to in my mind. Personally, it didn't come close to matching the personality, story, charisma, or passion of the first two. That being said, if it was a stand alone book, it would have been great. It is great. It's just not as good as the first two.

The entire 11-12 hrs is spent on one day. Some of the sections of Michael's day were tedious. And there were some fantastical elements, while not being a bad thing, that just didn't fit in with the dirty, violent character of the series.

Like I said though... it really was good. I'm just a little disappointed because I expected more.

I loved the first two in this series, "Dead I Well May Be" and "Dead Yard". If you enjoy a good story of swearing, drinking, lusting, and killing, you should love this. This third book (and I'm about 75% done) is even more over the top with it's cliff hangers and close calls than the first two, which may be fitting for a swan song. Logic, realism and character depth? Hell no! But grit, blood, lust and revenge. Yeah, more of that please. Oh, and the narration fits the first person tale perfectly. Ya wee shite!

This was my first book by McKinty, and I will download the others.
Michael goes about the most outrageous business with humor and introspection and with that lovely Irish lilt. It would be hard not to be captivated by it all.

The whole trilogy is definately worth a read, the narrator is excellent and the content and the pace of the book I found gripping. It is not a book for the faint hearted and there is lots of detailed violence throughout.