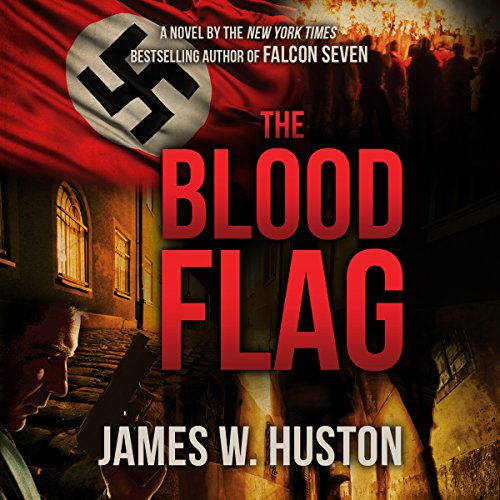 The Blood Flag was last seen on October 18, 1944, when Heinrich Himmler displayed it proudly as he commissioned the Volkssturm, the Nazi Party's new militia created to avert the certain defeat that awaited Germany. Hitler believed the Blood Flag, Blutfahne, carried sacred powers. It held the blood of the first Nazi martyrs, those killed in the Beer Hall Putsch in Munich in 1923, when Hitler first tried to take over Germany. Several Nazis were shot and fell onto the flag, pouring their blood into the already red fabric. That flag - with a white circle and a black swastika in the middle - still lives.

Kyle Morrissey, a special agent for the FBI, travels to Europe with his father to see him receive the Legion of Honor from France for his service at Normandy. But after the ceremony, while traveling through Germany, Kyle and his family encounter neo-Nazis perpetuating the evil philosophy he thought his father's generation had ended once and for all. Kyle soon discovers that tens of thousands are ready to raise the swastika once more and renew the hatred of the '30s and '40s. Baffled and furious, Kyle embarks on a personal mission to bring down the movement. But how? In trying to understand the history of Nazism, Kyle learns of the Blood Flag and knows it is the key to his success. From DC to Dresden to Recklinghausen and Argentina, the Blood Flag leads Kyle on a worldwide race in an attempt to end international Nazism for good.

This was a very good story and had a very intriguing premise. The main characters were all well developed and had a really interesting supporting cast to compliment them. The detailed landscapes and the worldwide treasure hunt was so suspenseful, but at the heart of the hunt is not something anyone would like to find. The author definitely had to do a lot of research to get all his historical facts right and wove them into a modern society effortlessly. His detailed landscapes were also done really well and gave the listener a really good picture. The narration was done fantastically. Every character, accent and scene was so amazing. The performance brought suspense when it had to and slowed things down to really get a feel for the characters at other points. My only complaint is that the end felt rushed. I wanted to know more about the aftermath of this hunt. The author definately leaves some mystery at the end and I am a nosy person so I really wanted to know, but on the other hand a little mystery never hurt anyone did it? Overall, a really enjoyable listen.

Very believable story line. Loved the plot line and suspense. Wish there was another book to follow.

I have always been a fan of James W Houston and all of the books he writes. this story was an excellent story that kept you on your toes and thinking about what is really going on in the background.