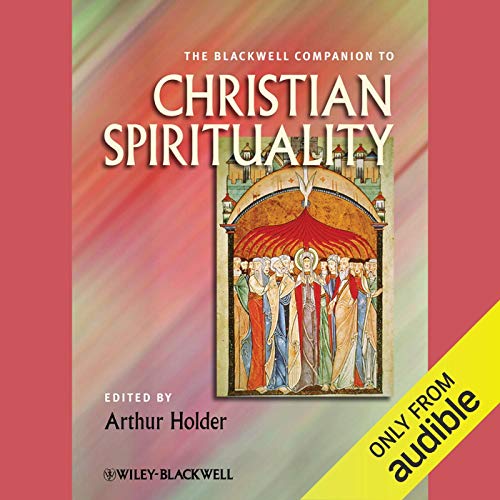 The Blackwell Companion to Christian Spirituality

Reflects an understanding of the field as the study of the lived experience of Christian faith and discipleship.

Provides material on biblical, historical, and theological foundations, along with treatment of contemporary issues.

Would you try another book from Arthur Holder and/or Jason Huggins and Marcella Rose Sciotto ?

The Blackwell Companion series, while not even, is often a very helpful one--both for its breadth of coverage and because there is often an ebook or PDF available online or through libraries.

The academic essays themselves are generally fairly strong. The history section is particularly well laid out, covering a large swath of material. Like a spearhead, the book comes to finer points in the final section, allowing the skill and background of individual scholars to come to the front of the discussion. There is much that is available for a professor to use in selecting material for a class, or for an emerging academic to use to orient him or herself to the field. There are a couple of essays that capitalize on obscure language and are overly technical for the volume.

Who would you have cast as narrator instead of Jason Huggins and Marcella Rose Sciotto ?

As far as narration goes, this was a terrible, terrible team. While it is admirable that a male and female were chosen for a long work of many voices, neither of them are trained to read academic work. Neither took the time to look up the technical words in the titles of the articles, let alone the entire chapter they were responsible for. While Huggins generally read well, missing only the technical words, it was a disaster for Sciotto. This narrator not only messed up the technical words, but cannot even pronounce basic university-level vocabulary. A nice voice does not make a good reader, and in the more complex pieces they were incomprehensible with Sciotto read them.
To be most blunt, Sciotto read half a book on Christian spirituality and did not know how even to pronounce some of the Bible books references, let along theological terms, and names. "Incarnational" rhymed with "national"!
I get that the technical language can be tough, but that basic words were misread by both authors means they were not up to the task.