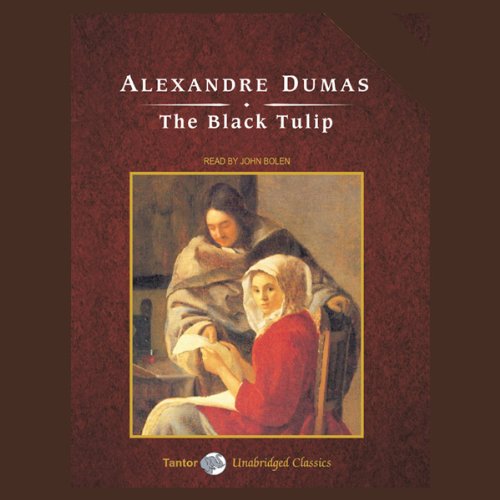 The tulip craze of 17th century Holland has a dark side! Cornelius van Baerle, a wealthy but naive tulip grower, finds himself entangled in the deadly politics of his time. Cornelius' one desire is to grow the perfect black tulip. But after his godfather is murdered, he finds himself in prison, facing a death sentence. His jailer's lovely daughter holds the key to his survival, and his chance to produce the precious black blossom. Yet he has one more enemy to contend with!
©2000 Tantor Media Incorporated

This my first review.
I simply couldn't continue trying to listen to this narration. John Bolen's voice has a constant change in volume and pitch, sometimes too loud and then towards the end of a sentence he will run out out of steam (breath?) and fades almost to the point of mumbling.
This narrator has completely ruined any enjoyment I might have had from this work by Dumas.
After about 25 minutes I gave up and have called it a lost cause.
Bolens heavy use of accents only make the narration worse. I generally have no difficulty with dialects or accents (tri-lingual myself), but combined with his style of narration, well I just gave up trying to listen. Personally any further Audible choice I make will not have this narrator.

I loved the idea of the book, but the execution of this audible recording is terrible. The most annoying aspect was the narrator, whose rising and falling inflections bore no connection to the words he was speaking. I recommend listening to a sample before selecting this title for yourself. I failed to do so, and deeply regret my error.

Another problem was the awkward translation. It was overly wordy, convoluted and difficult. Dialog was stilted, and the poor reading of the text compounded my frustration.

The story itself is compelling, and is worthy of a better rendition.

There is nothing that ruins a good narrated book faster than bad foreign accents. The narrator was either lazily reading the descriptives or faking several accents. I couldn't give this book better marks for this reason.

This is my 9th book of Alexandre Dumas... I read the previous ones, and this is the first of the Dumas books that I listen to. The narrator is extremly painful to listen to. His tone of voice does not correspond to what he is reading, which makes it difficult to comprehend the story. When he is quoting the characters, immitating the Dutch accent - one may as well listen to a foreign language. Very dissapointing and an affront to a brilliant author such as Alexandre Dumas.

Dumas does it again!

Cornelius van Baerle, a man with a consuming passion for life, is the gentle, brilliant and focused hero in the story. He is only introduced, in the story, after a violent introduction, by the author, portraying a tumultuous political time; the fighting factions loyal to William of Orange, the one in power, versus King Louis IX. He does a blind favor for his God Father and unwittingly gets involved, years later, with the politics of the time and prison is the consequence. Cornelius' consuming passion for cultivating tulips, and his complete ignorance of political matters, causes him to become an unwitting victim of extreme jealously, that follows him for years, an innocent scapegoat of political tyranny and, by chance, and by providence, an accidental and fortunate lover, in the purest form of love. An underlying theme, throughout the book, is that Cornelius van Baerle is a man of great faith in God and his suffering, throughout the story, by no fault of his own, except in his being true to his passions and his faith, never caused him to falter in his manners, faith or passions. Focused. The Black Tulip is an excellent read and demonstrates the typical book by Dumas in his ability to weave words, ideas and events into brilliant descriptions of the scenes and the thoughts of the the characters;feelings of ardor, jealousy, cruelty and callousness. He integrates well the above with the political climate of the time. Excellent narrator but, not being European or the like, where exposure to many languages is common place, I found many of the words, with an applied Holland or French? accent, difficult to understand and found myself rewinding several times. Otherwise, the narrator was wonderful. What great characters Dumas is able to create. Complexity made simple, human nature made plain. In this latter sense, the Black Tulip was ALMOST as good as the Gold Standard, in my opinion, The Count of Monte Cristo!

This lesser known shorter work of Dumas is my absolute favorite!

This is a good story about an interesting time, subject and place, but I had such difficulty with the readers voice, diction and pacing that I have been unable to listen to much of it. I will get a copy in print and read it. The voice may not be so distracting to all listeners. I suggest listening to the sample before committing to this one.

I read the reviews and didn’t think it could be that bad.... couldn’t make it 10 minutes.... it sounds like the episode of The Office where downsizing compels them to play the Louisiana Who-done-it game and Andy Bernard and others do the worst, most comical accents known to man, as performed by their acted characters accent. Thus, you get this imbecile, who acts a French accent like a drunken Foghorn Leghorn. I hated this. Dumas is excellent, and I’m very interested in the Tulip craze, but the performance is nails on a chalkboard. (Coming from someone that’s finished about 100 audible books)

Having previously only read Dumas’ stories of the musketeers, stories filled with characters and side characters, this novel, with its very closed cast and simple aims, is a superbly unexpected treat. The reader has fun with the Dutch accent, though the production quality is low (I think it was recorded at least twenty years ago). Listen for the one place where it sounds like someone screamed in the background and the reader immediately shut off the recording. I’m so glad I took a chance on this book I’d previously not heard of. It’s a great story, treating a uniquely weird time in history. Enjoy!

Narrator: Odd given the Dutch/American accent switch. Clearly had a hard time maintaining a consistent recording from session to session.

Plot: (Minor Spoiler in form of Comparison)
I suggest this book only for serious fans of Dumas. It is in the spirit of Monte Cristo but without its depth. It feels like a serial put together, which, given Dumas, it probably is. I do find value in that he was way ahead of Disney in his hero/heroine treatment. (You’ll see.)

How to destroy great literature.

Avoid at all costs. Poor recording with background noises of dogs and children.Reader unable to cope with complex syntax and sentence structure and has a dreadful 'Dutch' accent somewhere between a comedy german and a jewish rabbi.