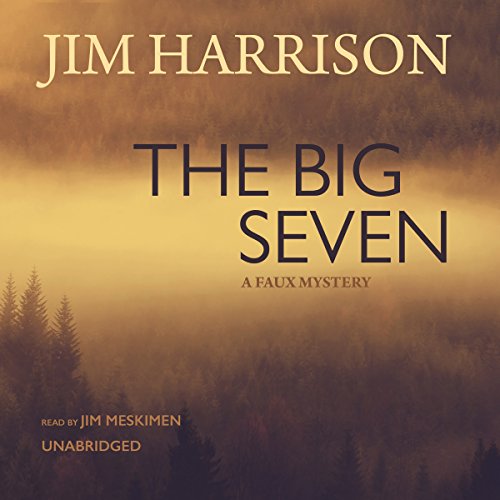 Jim Harrison is one of our most renowned and popular authors, and his last novel, The Great Leader, was one of the most successful in a decorated career: It appeared on the New York Times extended best-seller list and was a national best-seller with rapturous reviews. His darkly comic follow-up, The Big Seven, sends Detective Sunderson to confront his new neighbors, a gun-nut family who live outside the law in rural Michigan.

Detective Sunderson has fled troubles on the home front and bought himself a hunting cabin in a remote area of Michigan's Upper Peninsula. No sooner has he settled in than he realizes his new neighbors are creating even more havoc than the Great Leader did. A family of outlaws, armed to the teeth, the Ameses have local law enforcement too intimidated to take them on. Then Sunderson's cleaning lady, a comely young Ames woman, is murdered, and black sheep brother Lemuel Ames seeks Sunderson's advice on a crime novel he's writing, which may not be fiction. Sunderson must struggle with the evil within himself and the far greater, more expansive evil of his neighbor.

In a story shot through with wit, bedlam, and Sunderson's attempts to enumerate and master the seven deadly sins, The Big Seven is a superb reminder of why Jim Harrison is one of America's most irrepressible writers.

Should not of been written

I’ve very much enjoyed other of Harrison’s novels, but this one should not have been written. A more appropriate title should have been, “The Ramblings of an Elderly Alcoholic Pederast”. Note to any authors planning on letting go later in life; don’t. That should be your inside voice.

Someone from the UP should have proof listened to this before it was released. Too many mispronounced places. Not as professional as I would expect.

A great sequel to The Great Leader

More great writing by Jim Harrison, and richly rewarding in the meditations and memories of Sunderson. The narration is excellent; I give it 4 stars only because the narrator mispronounces the names of some cities. For example, he fails to pronounce first word of Sault Saint Marie as "Sue" as anglophones do.

learn to pronounce the places in the book narrator

Love Harrison's descriptions of rivers and trees and the people who value them. The story wrapped around these themes are just bonuses to me.