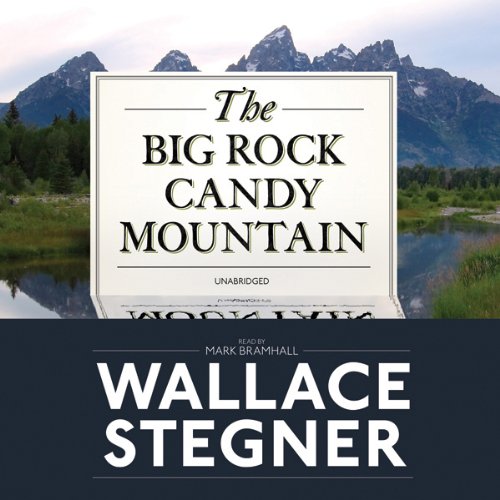 Bo Mason, his wife, and his two boys live a transient life of poverty and despair. Drifting from town to town and from state to state, the violent, ruthless Bo seeks his fortune in the hotel business, in new farmland, and, eventually, in illegal rum-running throughout the treacherous back roads of the American Northwest.

Based largely on his own childhood, Stegner has created a masterful, harrowing saga of a family trying to survive during the lean years of the early 20th century. It is the conflict between the hardscrabble existence and Bo's pursuit of the frontier myth and of the American dream that gives the book such resonance and power.

i could not stop listening to this book and devoured it in less than three days. at the end i felt a little angry at the professors who let me get out of more than one American Novel class without reading anything by Stegner. i was looking for a book about the west and found this great book. Though i have often seen Stegner s books at used bookstores, i never picked one up. at the ripe old age of 51 i am thrilled to have discovered him. i have to say, this writing, this wise writing, makes Hemingway look like an adolescent.

Some of the themes in the book, marriage, ambition, fidelity, integrity (and the lack thereof) are obvious and hit you over the head. Other themes are so subtle and so magically delivered, i had the feeling a spell had been cast. In general, you follow two people who are in love with each other, and who have ideas about life that could not be more different. As they travel from one dream to another the landscape changes. From city to country to city, small towns, big cities, it is America growing up. One of the most fascinating themes in the book is change, and as you follow these characters you slowly realize how important the ability to change will be to their destiny.

Four main characters, and i fell hard for each one of them. i cannot remember when i read a book that made me tell so many people they must read it.

I have over 200 books in my audible library and this book and narrator are the best of the best. PLEASE GET THIS BOOK !! You won't be sorry. Sometimes after reading Sparks or Roberts or others, one forgets what truly incredible writing can do to the heart and soul. Stegner, with this book, makes one hunger for more of a deep and meaty, wonderfully written story. I lived this novel while listening to it. It will just take you over. And Mark Bramhall replaces Will Patton as my favorite narrator. He is perfect for this book.

If you want a book and narration that will make you smile, cry, and be furious, and is lyrical and sweet as well, this is the book for you.

Fantastic from beginning to end

Hard to put down, I grew so attached to the characters I hated to see the story end. Would highly recommend this one. Best i have read in years! Mark Bramhall also does a great job. I will read more by both this author and narrator.

Yes, I KNOW "Big Rock..." is fiction. But it consists almost entirely of events in Stegner's life, even actual conversations (Jackson Benson's "Wallace Stegner, His Life and Work" is highly recommended as a companion piece). Heartbreaking. Riveting. THIS is the Stegner book that should have won Pulitzer. Narrator Bramhall deserves 5 stars, too. He uses a good variety of voices for the many characters in the story (he's especially good with foreign dialects).

This is a long read (listen), over 25 hours. If it were on T.V., it would be quite the mini-series. I almost bailed on the story early on because it looked like it was shaping up to be a romance story. Well, I am glad I hung in there because it was not.

Written in 1943, this story chronicles the life of a family from the early 1900???s. As the husband purposes to strike it rich with various enterprises that promise quick money, the family quickly becomes nomadic. Drifting from poverty to short lived wealth, the family is always on the move living in tents in the middle of nowhere to comfortable city life with various iterations in between. A true to life (even though it was fiction) tale of early America in the west. It was a fascinating and intriguing read.

The characters were flawed and at times not very lovable but the story got better the further along it went. It was interesting to gauge the family dynamics and how they evolved. In the end, love and to some extent, forgiveness prevailed. I could relate to how this road called life ends up throwing everyone a curve-ball to some extent.

Did it end up that everyone lived happily ever after? No, but they always hoped for a better life. In the end, our lives aren't defined by your social status and what stuff you end up with. It is much deeper than that. I loved the style of writing and the prose that Wallace used. I would highly recommend this book.

Excellent Story Despite Its Depression

This is a great book simply because of its excellent prose and character development, even though virtually all the characters are tragic and emotionally damaged. The narration is excellent and supports the overall quality of the experience. If you can overcome the generally depressing storyline, you should enjoy this book as a memorable read (listen).

I simply loved this book, and even though I wanted to see what was going to happen at the end, I didn't want to get to the end, because then it would be over. It's about an everyday family that you could see in any family today if the husband was controlling. A Really Great Read!

An amazing story, a "modern" classic

How did I not know of this book until now?

This is truly a marvelous story written with intelligence and humanity. This story has something for everyone.

I HIGHLY recommend this book to anyone. It's hard to imagine that there's anybody out there that would not be moved and touched by this story.

This was one of those books I had a very hard time pausing - even for things like going to work or to bed! Honestly, I'm not even sure what held me so strongly. This morning I was literally in tears while I was trying to get ready for work while listening, and that's just not typical. Actually, I normally reserve my "getting ready for work" time for something inspirational

I'm familiar with a lot of the places in the story from my mom's life and even some from my own, although they're certainly very different now. I don't know what else to say except that I really loved it and I hope that you do too!!

Goes on and on

Would you try another book from Wallace Stegner and/or Mark Bramhall?

Yes, not my favorite narrator or author but I would give each another listen.

If you’ve listened to books by Wallace Stegner before, how does this one compare?

Would you listen to another book narrated by Mark Bramhall?

If I wanted to hear another book because of the story but not just because of his narration, it's kind of dull.

Maybe, because it would have to be shorter than this drawn out version! The story is potentially an interesting one but it goes on and on with more and more bad luck for this poor family due to (the father) Bo's inability to stay in one place and his compulsion for trying get rich quick schemes one after the other. I got a little exasperated with the mother character for sticking with him, (and standing up for him and going along with him etc.) but I suppose it was a different time in history and women were supposed to "stand by their man". It's apparent the mother feels she made the decision to be with Bo and now she has to live with that decision but that got a bit tiresome after his continual behavior and cycles of bad temper and uprooting the family again and again for some unrealistic money making scheme.

I think the length, (and I usually like long audio books) paired with this narrator's voice makes this book hard to stick through to the end. I remember thinking in the first third of the book "There's two more sections to go?" I think it should have and could have been shortened and it would have been just as good if not better and all the important things could have been retained.

This was another book where you are introduced to the main character as a child, and see what an awful upbringing they had; so feel sympathy for them in adulthood. Then, they make the same mistakes they were running from in the first place, so you find it conflicting as to where your loyalties lie.

Bo is the dad and grows up living hand to mouth until he meets his wife and has two children. He's always looking for the next big thing, be it oil, gold or whisky and the family just has to go along with him as he is so violent it's not worth complaining. The family keep seeking their fortune across America and Canada and the history is rich along the way. You'll enjoy it.