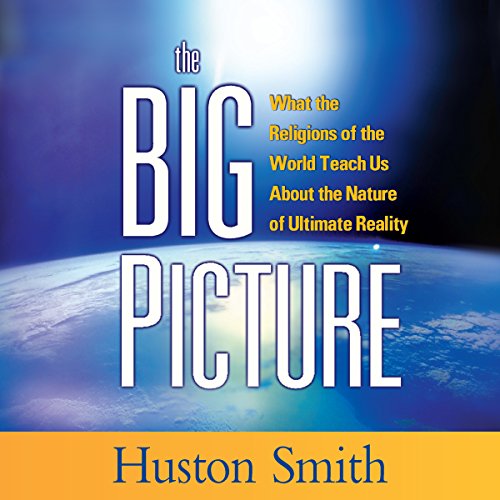 Over eight decades after his birth to missionary parents in China, Huston Smith now finds himself in an age of disbelief that has led to a spiritual crisis unlike any that history has previously known.

In The Big Picture, Smith draws from his lifetime of scholarship to describe for us the nature of ultimate reality. His description combines the most up-to-date findings of science with the enduring truths of the world's greatest religions, an alignment that offers firm grounds for hope. The vision is mystical and, as supported by the evidence Smith introduces, completely believable.

Join this distinguished author, scholar, and teacher as he explores:

From as far back as he can remember, Huston Smith tells us, his deepest longing has been to know the truth about the final nature of things. The Big Picture is the culmination of his quest for the widest-angle view of the world that is available to the human mind at this point in history.

Bigger than “The Big Picture”: Reality or Fantasy Beyond Science?

It’s interesting that Sean Carroll recently also published a science book called “The Big Picture”, which depicts a reality so much more limited than Huston Smiths. Smith’s brilliant encapsulation of the two worlds as described by Science vs. the perennial philosophy of the world’s mystical religions, by the originator of the “Good Friday Experiment”, describes the use of psychedelics as well as spontaneous transcendental experiences in glimpsing “the bigger picture”, and the implications for our understanding of reality, and for our lives. Reality or fantasy? You decide. The narration by the Huston Smith himself is quite slow and deliberate, which takes a bit of getting used to, but by the end I appreciated the mindful attention he gives to every word.