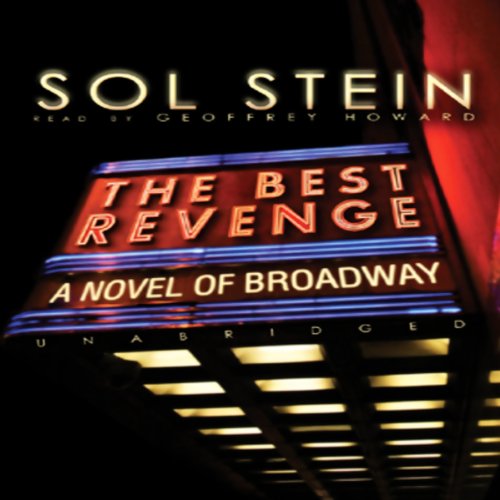 Ben Riller is the most successful producer on Broadway, but his newest production is in danger of closing before it opens. In his stressed-out condition, Ben is hearing the voice of his long-dead father, and they're having a running argument about life, love, and other people's money.

When the late Louie leads Ben to some old friends of his, Ben suddenly becomes involved with two generations of wonderful underworld characters. But one of them pulls the trapdoor under Ben's feet, forcing him to choose between moral and financial ruin.

The Best Revenge takes us on a vastly entertaining excursion behind the scenes of the Great White Way, where the drama is often more suspenseful than anything that happens onstage - and where the best revenge is, of course, success.

"[An] entertaining potboiler." (Library Journal)
"A novel that moves like a great Broadway comedy, rich with superbly etched characters and cannonball momentum....Something has gone right for Stein in this novel, his strongest and best-tailored ever....Not high art - but razor-sharp." (Kirkus)
"A cracklingly cynical tale of the manipulations behind the mounting of what is ultimately a hit Broadway play....Stein's ear for the deadpan dialogue of men who think only in terms of money is exact, his plot is nicely turned, with several surprise endings, and the Broadway detail is solid....Slick, hard-boiled entertainment." (Publishers Weekly)

Equally appealing to readers and writers

I'm not sure whether Sol Stein wrote this book to illustrate the principles he espouses in "Stein on Writing," or whether he simply employed the principles while writing this book. "Stein on Writing" draws on this book for many of its examples. What emerges is an entertaining, fast-paced novel with numerous, multi-layered characters just as Stein prescribes in his text on writing. Good story with excellent narration by Christopher Lane (who also narrates "Stein on Writing"). Inclusion of a character long-dead at the time of the events described (in the form of a disembodied voice) was a stroke of creative genius. A dandy little piece of escapist fiction, an exemplar of Stein's recommended writing techniques, or both. Equally appealing to readers looking for a good story and writers looking for examples from a master.

I was hoping to learn more about the job of a Broadway producer. Instead I learned of a producer who taked with his dead father and sought investors in organized crime. Don't believe that this will make it to Broadway no matter who produces it.

Would you listen to The Best Revenge again? Why?

Possibly. The narration is excellent and I actually enjoyed the first five or six chapters, but then the point of view changed and it all became quite confusing. It almost seemed as if Mr. Stein was trying to write this book as a companion to his Stein on Writing so that examples could be used from it. This made for a disjointed story.