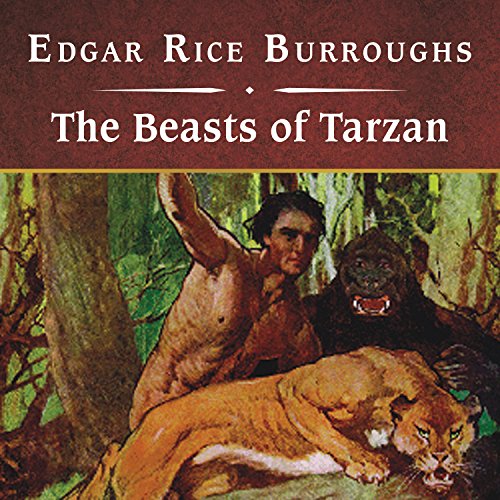 After renouncing his savage life in the jungle for the sake of his wife Jane and newborn son, Tarzan finds his trust in civilization has again been betrayed. Tarzan, now the rich Lord Greystoke, becomes the target of sinister criminals. When he and Jane try to save their abducted son, Jane is kidnapped and Tarzan is stranded on a deserted island. But as the lord of his realm, he calls the beasts of the jungle to his service. Sheeta the panther, Akut the great ape, and the giant Mugambi remain steadfast allies in Tarzan's quest to save his family...if they are still alive!
©2000 Tantor Media Incorporated

Another Great Tale in the Tarzan Saga

Picking up two year after the second novel, The Beast of Tarzan was a great adventure tale of survival and savagery. The story was and interesting concept, and Tarzan's crazy pack of friends was a really interesting idea. The only negative for me is that the plot got a bit repetitive at times, and really, how many times does Jane have to be kidnapped or taken. other than that the book was great! If you liked the first two books in the series, you will love this one as well.

This is an exciting, fast-paced Tarzan story in which the ape-man must try to rescue Jane and their newborn son from the nefarious scheme of the evil Rokoff. The narrator has a clear, pleasing, expressive, reading voice but, by her several mispronunciations, seems unfamiliar with some common English vocabulary words.

I was on the edge of my seat the whole time. there's a lot of suspense and monotonous betrayal. sometimes it gets a little bit annoying how Tarzan is unaware and doesn't learn until later. Great book all the same👍