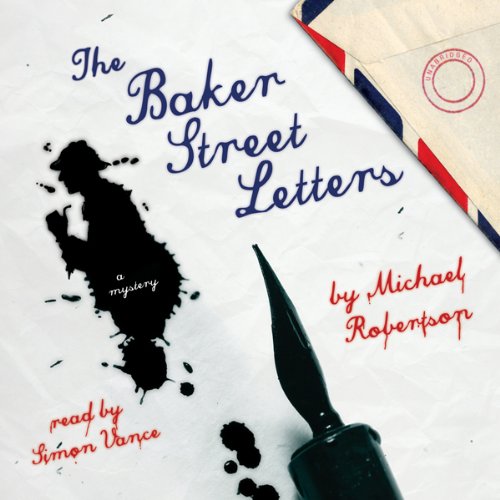 Reggie and Nigel Heath are relatively close in age but worlds apart in personality. The older of the two brothers, Reggie is a successful attorney with charisma to spare. Nigel has always struggled to step out of his shadow.

When Reggie leases space in an office building on London's Baker Street, he finds that the paperwork comes with an odd stipulation: his firm must receive and respond with a standard reply to letters sent to Sherlock Holmes, who had occupied the same famous address.

When Nigel, newly suspended from practicing law and relegated to clerk duties, becomes intrigued by one of the "Dear Sherlock" notes, he disappears quite suddenly, leaving a dead body in his wake, and Reggie must hop the next flight to Los Angeles to uncover the truth. Hot on his heels is his sometime lover, Laura, a quick-witted stage actress who's captured the hearts of both brothers.

I enjoyed this book, but only to a point. Simon Vance was pretty good - which I expected. After listening the the whole book, I have to wonder if the author would have benefited by writing a few more drafts. I want to know why all of the really interesting stuff seemed to happen "off-stage". The listener had to hear about it second & third hand. I may have missed it, but I still don't get how the bad guys knew where to look for the "letters". Also, the main character was dissappointing. I kept expecting things to fall together & get really interesting at the end, but the end just fizzled. I want to know how the main character got to be a success in his carreer, and yet remain pretty clueless so much of the time. And if that was the moral... well, like I said - great concept & great narrator.

As far from Holmes as you can imagine

I didn't buy or listen to the book under the impression that it was a Sherlock Holmes-book, I've read the synopsis.

But how this book would have benefited from a holmsian touch. This is not a detective story - it's a story about a rich lawyer who just follows one clue, which leads to another clue and so on, and so on. After finishing the book I was amazed that the main character went through the entire ordeal without making a single major deduction. He goes to a place, talks to people who direct him to another place/person and so it goes.

So, if you like me was hoping for some classically inspired detective work, around the foggy streets of London - buy something else.

If you're after a book that could pass for the script for a B tv-movie set in California - this is for you.

This has so many plot holes that it's "drafty." The author seemed to give up revising completely in the last third (cell phone ringing after a plunge in a resevoir, etc.). Even Simon Vance couldn't save the listen (and he mispronounced some words I think). I might still download the next installment because the framework has promise as a good light mystery series - and it's cheap.

What would have made The Baker Street Letters better?

What could Michael Robertson have done to make this a more enjoyable book for you?

If it did, I didn't see them. I was not able to finish the book.

I'm a fan of all things Sherlock Holmes so this was extremely disappointing.

Okay, my fault. I read the reviews but obviously didn't pay attention.

This book has an incredibly intriguing premise, BUT it is incredibly disjointed. It's missing a lot of action or explanation at most points.

The main character is a jerk in London and compassionate in LA. ?? The original mystery is disposed of disingenuously. The similar to love interest isn't interesting. The climax is unbelievable - in fact most of the LA sequence is unbelievable. Not good. Not good. Not even Simon Vance can save this drivel.

I see there's a sequel. Do not buy either. I can't believe the authors abilities could possibly have improved much in the short while between publications.

I liked this story . Not very much like sherlock holmes story , but I enjoyed it.

I gave this one several hours but was bored. I don't listen to be bored. Maybe it gets better. I didn't waste my time finding out.