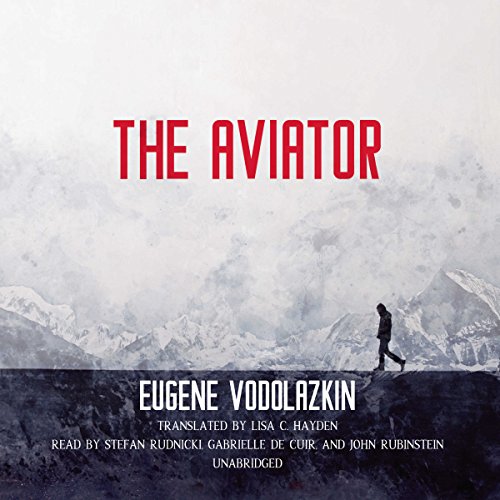 A man wakes up in a hospital bed, with no idea who he is or how he came to be there. The only information the doctor shares with his patient is his name: Innokenty Petrovich Platonov. As memories slowly resurface, Innokenty begins to build a vivid picture of his former life as a young man in Russia in the early 20th century, living through the turbulence of the Russian Revolution and its aftermath. But soon, only one question remains: How can he remember the start of the 20th century, when the pills by his bedside were made in 1999?

Reminiscent of the great works of 20th-century Russian literature, with nods to Dostoevsky's Crime and Punishment and Bulgakov's The White Guard, The Aviator cements Vodolazkin's position as the rising star of Russia's literary scene.

A view of Russian hisory told in a fantastical, compelling story. A work of genius.

I was hoping for more. the ending was unsatisfying. not sure if it was worth the listen. it's sort of like flowers for algeron without completion or purpose.

An evolving epic story of events in history taking place in two eras, the two seamlessly carrying the listener through a life that is tested beyond endurance. A fascinating read, an author strongly interpreting masterful Russian writers, especially Alexandr S. Pushkin, but projecting a super modern and exciting style of his own. Loved it.

Not sure what to think

Liked parts of it, fascinated by some of the ideas, depressed by some of it. Not really entertaining, but rather thought provoking. Very well performed.

Great way of telling a story and reviewing history.
Looking forward to more from this author!

What a strange story.I only stuck with it to find out what happened, strange, very strange.

Why did I keep listening?!

Positives: it's an intelligent book, written in the style of early 20th century Russian writing. I guess it's meant to get you thinking. I dare say someone has considered it good, or it wouldn't have been translated and published here. And the narration was ok, although I would have preferred it to have been narrated by Russian narrators who can speak English, which would have sounded more authentic.
Negatives: It was dry, tedious and miserable. If you want a book to study and intellectualise, maybe you want this book. For me, it didn't live up to the hype. It isn't what I was expecting, and for the most part I found myself thinking about anything but the book through a lot of it. I was curious about one or two aspects of the story - a paragraph would have sufficed. I was utterly bored by it.

enjoyed the story however...

The female voice didn't fit at all. it was poorly read and didn't fit to the excellent narration of the protagonist