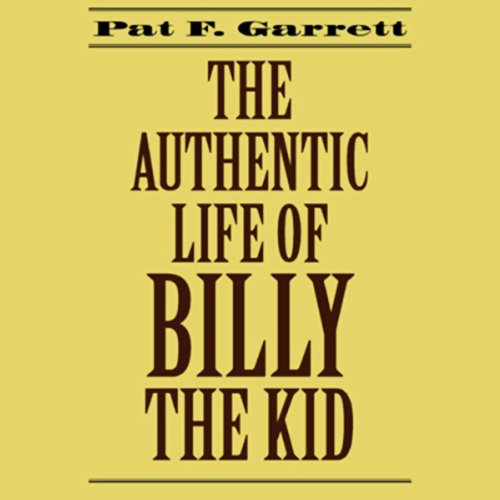 The Authentic Life of Billy the Kid

Reputed to have killed his first man at the age of 12, William Bonney went on to gun his way into Western legend as Billy the Kid. When he was finally shot himself at the age of 21, the Kid was famous throughout the country as the boy who, so he boasted, had killed a man for every year of his life.

This is the story of William Bonney as told by the lawman who ended his notorious career. While explaining the public sympathy that the citizens of the Southwest often accorded youths like Bonney, Garrett challenges the glorified legends of the Kid, offering instead the more genuine story of a young, reckless cowhand who became a hired gun.

Combining the best elements of eyewitness history with the dramatic flair of a great western novel, this is the clearest account we have of the meteoric career of a man some thought of as a murdering fiend, and others as the Robin Hood of the Southwest.

well done except for the obvious patch ins.

Good history from one who was actually there. Garrett is now looked upon as a villain, but was in fact doing the duty others were afraid to do.

I know its a old book, but comeon.

This book is OK. Just ok. If your interested in Billy the Kid then you probably are going to buy this regardless of what is said about it. I know I disregarded the reviews and bought it anyway.

My problem is the recording. It is terrible. It really sounds like it was recorded in a bathroom on a cassette tape and transferred to digital audio later.

I understand it probably was recorded a long time ago, but that really is no excuse for the poor audio quality. I hate to be that person, but the narration was also the worse I have ever listened to. Like the person reading it was just reading it like a kid does when called on in class. You know, doesn't really want to read and has no emotion in what he/she is reading.

Perhaps if the audio was better I would have been able to appreciate the book more.

Where does The Authentic Life of Billy the Kid rank among all the audiobooks you’ve listened to so far?

I love this book as it is an account from a man who was there- Pat Garrett.
He probably did embellish the truth a bit.. but it is as close as we can get.

What other book might you compare The Authentic Life of Billy the Kid to and why?

Jeff Guinn- Go Down together.
Both books are "authentic" accounts of Wild West gangsters.

Not a fan of the narrator. The literal bleeping of words got annoying, just read the story dude, as it was written.

A lot of footnotes, inconsistent audio

The book was interesting. My major issue was that there are long notes at the end of each chapter. The notes are typically interesting and informative, so it would have been better if they were read at the point where they were relevant, not at the end of the chapter. The way it was done makes it seem like you go forward and back a lot, rather than coherently chronological. Also, there are parts of the audio that were clearly re-recorded. The background noise levels are different so the change is obvious and abrupt.

Humanity within the Villian!

This was a super informative book! There were parts that I struggled to listen too, it got very technical and detailed about persons (names, relationships, historical events and places), this is a historical re-telling of real events after all. However, overall the riveting adventures of Billy the Kid grabbed my attention frequently as the Author recounts live-action testimonies of interacting with Billy. Written in 1882 by a man who grew up with Billy and later shot him when employed as an Authority who needed to take responsibility for ending the reign of outlaws, this story was a unique one, giving our villain a true side of humanity as much as he was an outlaw too! Enjoy!

The narrator really ruined this one

The story was enjoyable to hear. It was very matter-of-fact and didn’t have much in the way of poetry, but it was enjoyable. Whoever did the narration couldn’t keep the sound anywhere near the same throughout the entire recording. It was really distracting and at times extremely annoying. This book definitely needs an update as far as narration goes.

A True and Personal Account of Pat Garret’s hunting, capture, jail break, and killing of Billy the Kid, from Pat Garret’s perspective, in his own words, and sprinkled throughout with his running commentary, opinion, rebuttals, etc. I believe this book to be far less about Billy the Kid, and far more about who the man was who was determined to, and eventually did, hunt down, capture, and eventually killed, Billy the Kid. So more specifically, this book provides great insight into who Pat Garret was as a person. Although, somehow you don’t realize that is the case, until the very end of the book, and after you’ve read/listen

It is obvious that Garret felt a powerful need to set down in print his own version of what occurred. It is equally obvious that as will often happen with hind sight, post event occurrence, etc., that there were plenty of people who were on the side lines, who had absolutely nothing to do with the events, directly or even indirectly, and/or simply people who attempted to use the events for their own political, or personal reasons, who actively criticized Pat Garret after the fact. I think (and from everything he says himself), that Garret in turn felt the need to share his own version of what occurred. Not to mention there were a ton of People making serious money off of Billy’s so called “story”, much of which was probably total Horse *coughs*, so Garret likely felt that he at the least, since He was the guy who literally spend days and months chasing Billy down, deserved to make some money off of publishing the “Truth” of what happened, as he saw it, and also, give a big middle finger to the many others who were publishing and being paid for all of the b.s. stories in circulation that did not hold a grain of truth to them. When reading or listening to the telling of this tale, I would recommend that One keeps in mind, that after any event involving other people, there is always: Person 1’s perspective, Person 2’s perspective, and how each recalls events based on their own thoughts, feelings, sight, emotions, location, etc, and lastly, there is the Factual unadulterated Truth, (which has no one available to tell you its tale.) Basically, You have to take into consideration who is telling you the tale, and the story teller’s own various vested interest in that version of the narrative of their tale, etc., simply take everything you hear with a grain of salt and as this is history, take into consideration, the lifestyle, morals, politics, legal proceedings, etc., of the “wild west”, in America at the time of these events. Society and what was acceptable, crime, punishment, and all that, were completely different than today’s Society, (one would hope, but in 2022, and with thoughts of then Wear Coast and current lawlessness, it recently seems as if we’ve stepped back in time to over 100yrs again)

Initially, I found this Book to be far too dry and boring to keep my attention. However, as it progressed, and I got accustom to the Narrator’s mostly monotone reading, and the Author’s both flipping back and forth in the timeline of events, and/or interjecting his personal comments, thoughts, or rebuttal after various events, both the book reading and being able to “get into” the storyline and all it encompassed, certainly increased.

I dare say that by the end of the book, I was pleasantly surprised that I had reached the end, with the end feeling fairly anticlimactic (SPOILER=When Pat Finally Ends up Killing Billy, Duh!, it’s history and a well known fact, so No Spoiler or Surprise there, the Spoiler being that it doesn’t happen until the very end of the book.)

Just a brief Disclaimer, I’m not typically an Audio Documentary Listener, unless it involves “True Crime” cases. So, this review is simply from an average everyday, Sci-Fi, Fantasy, True Crime, and Mystery Reader/Listener’s perspective; however, I will say that I have read or listened to thousands of books throughout my lifetime.

I would actually recommend giving this a listen. I think it gives You a good impression into the kind of man Pat Garret was as a person. Along with what is likely a mostly true version of historical events, if taken with a grain of salt.

As for the insight this book unintentionally provides into the character of Pat Garret, for example, in one section Garret describes a time when he and two friends that were traveling were hanging out with some Mexicans while on the trail of Billy the Kid. He goes on and in rather extensive detail, to state that the Mexican took a dislike to him (and/or decided to focus on his other two companions) and that he invited them back to his house to drink. Then Pat spends a good while describing, berating, and generally disparaging this guy/host, his wife, his motivations for the extended invitation of the men to his house, his boisterous and bragging behavior, along with his in general pompousness, etc. Consistently belittling this guy and his actions in every way. Thus, Garret provides unintentional, yet deep insight into what type of man Pat Garret was himself. I started to write what impression it gave me, but then deleted it, and I will instead leave it up to You, and for You to come to Your own conclusions on what type of man he was, and if what he wrote was the total truth, or the truth as he saw things, and if he possibly embellished any details. I will say that with his personality, it doesn’t surprise me, that he spent quite a bit of time on rebuttals of what others claimed, or justifying his own actions, etc. Pat Garret like most people, strikes me as someone who did not like to be, nor did he believe himself to be wrong.

Although the 1996 recording by Blackstone both in quality and chosen narrator is poor and monotone in nature, the life of Billy the Kid as a topic kept me listening. This audiobook is a struggle, but it’s free so I’m thankful in that regard.

Reader was really good but the audio isn’t great…I’d relate it to the quality of audio you get via Bluetooth in your vehicle. I don’t understand why some of these audio books can’t give HD quality audio

I was hoping for more details, a good account but take with a pinch of salt

For those that are tainted by the movies must listen to this. Pats rendition of his chase for Billy is excellent and his explanations of Billy’s behaviour and history paints more pictures than I’ve seen in other books and movies.

I did not know much bout Billy the Kid so it is gud to listen to his story, I don't think he was as bad as his reputation.

Old west told as it was

The story of Billy the kid by someone who knows him and doesn't big up there events in it.

Quite interesting hearing from an actual participant in the events, but an utterly abysmal quality of recording.

the recording of this book is awful and unfortunately makes this a difficult listen.