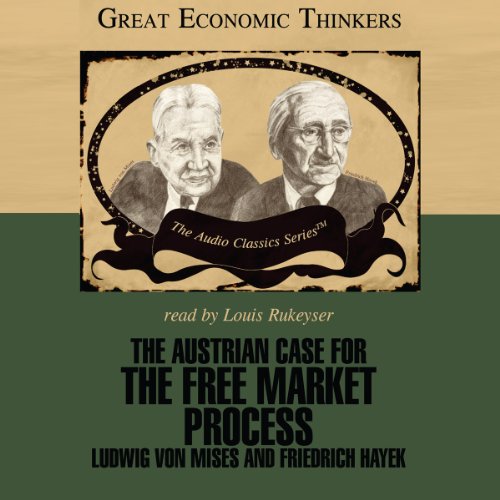 Ludwig von Mises (1881-1973) and Friedrich Hayek (1899-1992) were perhaps the foremost defenders of the free market and limited government during the mid-twentieth century ascendancy of Keynesian economics.

Mises highlighted the problem of economic calculation in non-market economics. He saw the price system as the basis of economic calculation, and emphasized the importance of sound money for it to work properly. Mises created an all-encompassing theory of economics as a system of human action. Hayek emphasized the role of knowledge in economics, asserting that man "cannot acquire the full knowledge that would make mastery of events possible". He insisted that capitalism has improved the living conditions of workers. Hayek received the Nobel Prize in 1974.

I bought the audio book because I am a believer in the Austrian School's philosophy and wanted to learn more. I will agree that the content is informative and enlightening. I would have preferred that Louis Rukeyser did all of the reading rather than inject other voices with thick accents that sometimes makes it difficult to understand. My rating is for the content of the book only . I wish there was a separate rating system for the verbalization component of audio books.

Too many narrators of different volume and accent made it harder to tune my ear to what was being said. The goal of authenticity is laudable, but made listening to the material more difficult. Any single accent would be better as I can “tune my ear”, but multiple accents quickly interspersed increased the degree of difficulty. Use an Austrian accent since he was Austrian.

I like Hayek and Mises. It is a good book, but has distracting voice actors.

For a work based solely on ideological references, this is most thrilling & entertaining. The dramatic narration is quite engaging.

The best book on Economics I have ever ran into.

It provides wholesome understanding of Economics from many points of view both subjective and objective. Of how there are no true threats of monopoly unless the state interferes by subsidies and laws on demand from powerful groups.
It made great points in the favor of Libertarianism. The only thing that it left unaddressed is how is the market to police itself examples: Moody's - credit ratings, a similar but private entity as the FDA.

This is an indispensable book

This is an indispensable book of you are trying to understand how human beings act.
Unfortunately, the Austrian theory is not thought in Economic Schools.

not as focused on the theory as it could be

the use of different voices for the quotations made this easier to follow than some books I have listened to. but if you are looking for more technical info and less personal history this may not be the right book for you.

Economic philosophy based in reality

What made the experience of listening to The Austrian Case for the Free Market Process the most enjoyable?

I felt the Rukeyser's voice made this story very enjoyable. Both Hayek and Von Mises makes me suspicious of today economic thinking. Their thoughts on government interference to help social change are as current today as when they wrote them.

Would you be willing to try another book from William Peterson? Why or why not?

This is THE short-course for anyone who wants to understand natural law as it applies to economics. If you were taught Keynesian theory and it seemed like a foggy convoluted mess, Mises and Hayek will explain why in simple language. The vernacular accented voices in quotations adds color and sincerity where it isn't necessary but makes a most enjoyable addition. As David above states, the prophetic nature of these guys has been evident for decades, and those who fail to understand what Mises and Hayek teach are bound to slavery they will never comprehend.