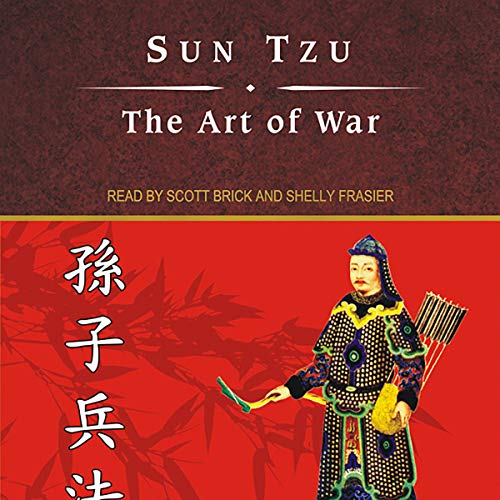 Written before Alexander the Great was born, this Chinese treatise on war has become one of the most influential works on the subject. Read widely in the east since its appearance 2,500 years ago, The Art of War first came to the west with a French Jesuit in 1782. It has been studied by generals from Napoleon to Rommel, and it is still required reading in most military academies of the world.

Although it was meant to be a practical guide to warfare in the age of chariots, many corporate and government leaders have successfully applied its lessons to battles in the modern dog-eat-dog world. Sun Tzu covers all aspects of war in his time, from strategy and tactics to the proper use of terrain and spies. In this version, Sun Tzu's lessons are brought to life with commentaries from ancient Chinese history, which illustrate both the philosophy and the principles of his teachings.

If you have never read the Art of War then buy this one or some other, you will not be disappointed. It is one of the best books I have ever read. It applies to so many aspects of life that anyone from soldier to businessman can learn from it.

If you have read it before you will get nothing special from this one. It was not much different from any of the other translations that are out there.

Still required reading for a reason

This is one of those classic works that I’ve picked up and browsed through a few times, but never quite got around to reading in its entirety. This audiobook provides a translation of the original sparsely-worded 2,500 year old military manual interspersed with commentary and historical anecdotes from ancient China.

Jaded present-day readers might be tempted to scoff at the simplicity of Sun Tzu’s treatise and its quaint-sounding language about walled cities, terrain, and taxing the peasants -- gosh, Sun Tzu, we should deceive our enemy? we should only attack when he’s weak? Tell me more! -- but look again. The Art of War isn’t a breezy self-help guide -- held in the mind, its principles form a constant admonition to let the circumstances shape your thinking, rather than try to impose your thinking on the circumstances.

Which is something that human beings, when you think about it, aren’t naturally gifted at. We get carried away with emotions. We tie ourselves to inflexible agendas and ideas. We’re indecisive. We prefer direction from others. We underestimate difficult problems and get in over our heads. We bias ourselves towards predictions that say what we want to hear. The point Sun Tzu (or the authors whose work was attributed to him) were making is simple: if you can overcome your own cognitive biases, and take advantage of those of your enemy, you’ll do well.

You don’t have to be much of a student of history to see how military, political, and business leaders have gotten it right or wrong, human nature being as hard to overcome as it was 2,500 years ago. Consider how a loose, cheaply-run network known as Al-Queda managed to goad the United States into wasting vast amounts of money on a war with no clear victory condition, while alienating allies and sacrificing some of its own treasured democratic ideals. Or how China, rather than making a risky show of military strength against the US, keeps our power in check by owning part of our national debt. Someone behind that decision must have read his Sun Tzu.

Just goes to show why The Art of War’s zenlike lessons are still required reading in many circles.

A little more than two hours hardly does the famous Sunzu Binfa justice, granted the original bamboo scroll copy of the Sunzu Binfa was not very long (36 treaties), but the commentary in this little volume consists of little more than stories that has little to do with the Sunzu Binfa, one can argue that those history may be inspired by Sunzu, but still, commentary should be more in depth, and it would have been better if the author numbers each treaty in the original order.

If you could sum up The Art of War in three words, what would they be?

Sun Tzu's Stratigum give a clear cutting approach to problem solving. Seeing war as art stretches my mind, however, we all battle elements of our lives, and we command a powerful army with every idea that we pursue, protect, or promote. The Art of War has survived for good reason, it captures the simplicity of our nature to survive against the odds, strips the life and death emotion away revealing the structure of dominance. Every Artist owes it a read.

Quite simply and excellent rendition of Sun Tzu's classic text.
Well paced and nicely divided between the two narrators. One reads the translated Sun Tzu wisdom and the other the footnotes and afterwords.
This format really breathes life into a 2600 year old book.

This version uses two vocalists; one for the main text, another for the footnotes and secondary texts. This makes the flow of the book move right along. Almost every line or paragraph is directly applicable to business life.

The Art of war

Would you listen to The Art of War again? Why?

Yes. The readers did an outstanding jobt

Have you listened to any of Scott Brick and Shelly Frasier ’s other performances before? How does this one compare?

When the autor explain to the emperor that in order to develop strategy he needs to reinforece the discipline and obedience of his people. Sun Tzu is requested to illustrate this with the emperor's concubines. The episode ends up with the beheading of two of them.

With most of the commentaries taken out, the actual words of the author are much easier to understand.
Many powerful lessons - for business, not just war.

The female was hard to understand because of her voice. I was wearing a Bose WiFi headset.

Like the tao the way to win at war is to not be drug into them. I've listened to this book many times and really enjoy the subtle way to get things is to not appear to want them.

To me this is the best audio version of The Art of War. Both narrators were clear, crisp, and sufficiently expressive in their delivery