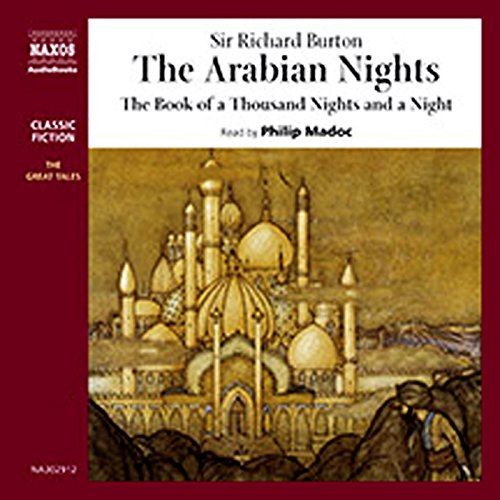 Though The Arabian Nights are generally known as stories for children, they were originally tales for adults full of adventure, sexuality, violence, and the supernatural. They certainly inspired the imagination of Sir Richard Burton, the 19th century explorer, linguist, and erotologist who brought all his worldly experience and superbly expressive prose style to bear on the tales of Sindbad the Seaman and Ali Baba and the Forty Thieves. Scheherazade must keep her king entertained with stories if she is to avoid the promised sentence of death.

Excellent, But Too Short

What does Philip Madoc bring to the story that you wouldn’t experience if you just read the book?

If you could take any character from The Arabian Nights out to dinner, who would it be and why?

Harun al-Rashid of course. He was the fifth Arab Abbasid Caliph. He ruled from 786 to 809. His reign make well have been the apogee of the Islamic Golden Age. He promoted Islamic art and music along with science and commerce.

This audio book is an excellent narration of a small part of Burton's famous translation. It is very true to Burton and to the original tales that Burton translated. Burton retained the substantial sexual content of the stories along with the violence and bloodshed. He was much condemned for this at the time (Victorian England) but he chose authenticity over censorship. Burton also translated the pervasive Islamic character of all (almost all) of the characters and places in the stories.

The key problem with this audiobook is length. It is only 3 hours and 42 minutes long. A narration of this quality, covering more of the tales would be highly desirable.

This performance is possessed of two primary benefits.

Firstly, the classic translation by Sir Richard Burton, for those of us who prefer the boldness of style of 19th century English prose. I think that style lends itself very well to these centuries old tales.

Secondly the narration by Philip Madoc is equally strong and very well suited to this style of text.

The knock against this is that it's too short. It's an abridged selection of just a few of the stories from the Arabian Nights.

I'd well wish for an unabridged performance of the Burton translation.

Until then, this is a good taste of it.

What did you love best about The Arabian Nights?

The narration is truly great. The reader's voice is engaging and fits the part perfectly. He reads with emphasis and emotion. Fantastic storytelling, even if just to listen to the words being spoken.

Was disappointed by how shortened it was. The story of Aladdin is not included, though that is arguably not a true part of the 1001 Nights (although the same could be said of the story of Ali Babba, which is included). I wanted more.

Some of the stories were less than completely satisfying, but that's a matter of opinion and the stories are what they are, although it makes me wonder (not having read a full, unabridged version, why some of these stories were included over the rest). Worth a listen to any of those interested, but I will probably try and get an unabridged version at some point to get the full experience (although lacking the amazing voice and production).

I loved listening to this audible book. The music was awesome and the narrator was superb. I probably would not have enjoyed this as much if I was reading it and really appreciate the story telling.