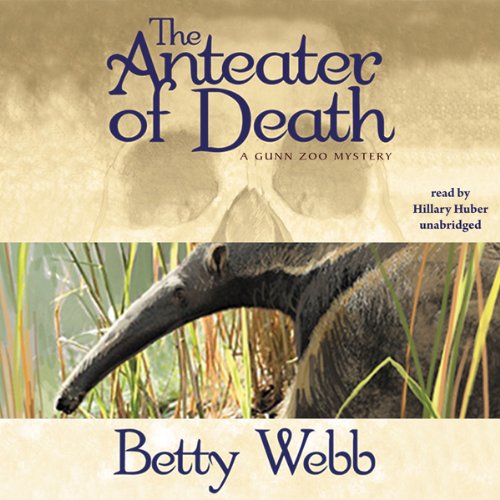 The Anteater of Death

If Lucy, the pregnant giant anteater from Belize, didn't kill the man found dead in her enclosure, who did? California zookeeper Teddy Bentley must find the real murderer before her furry friend is shipped off to another zoo in disgrace.

Then another human bites the dust, the monkeys riot, the wolves go nuts - and that's just the beginning. Teddy's father, on the lam from the feds for embezzling millions, gets targeted by a local gangster. Her socialite mother, Caro, a former beauty queen who loathes Teddy's dangerous job, starts introducing her to "eligible bachelors"; but Teddy has already given her heart to Sheriff Joe Rejas, a migrant worker's son. Caro is not pleased.

Enjoyable all the way through. Light. Fun. Loved the info about the animals. Especially loved the care and respect for them evident throughout. Teddy is great--I'll definitely want to hear more about her shenanigans : )

More than the mystery, I enjoyed learning about zoo keepers and anteaters in particular. The mystery was OK. I will probably read the next in series mainly out of curiosity about the next animal.

If you love animals...

then you'll love this. You'll get a nice cozy mystery, a good narrator, and some new animal trivia. The first chapter was a bit strange, and almost made me move on, but I'm really glad I stuck it out. I've already listened to the next few books...

One of the best mysteries I've listened to lately

One night, in <strong>The Anteater of Death</strong>, Lucy, the pregnant giant anteater at the Gunn Zoo, finds one of those human things wriggling in her exhibit, infuriating her that he would dare to invade her home. By the time zookeeper Teddy Bentley, the daughter of an influential zoo board member, finds the body, Lucy, in her anger, has flayed the body of the skin on much of his body and face. But it doesn't take long before Sheriff Joe Rejas, Teddy's ex-boyfriend, realizes that the man was actually murdered by being shot.

The situation gets tied up with the Gunn Trust when the sheriff discovers that the victim is Grayson Harrell, the husband of one of 38 adult voting members of the trust that holds a castle to rival Hearst Castle and established the Gunn Zoo. Grayson has been one of the leaders of younger family members who are trying to break the trust, hoping that they can get more money from development of the 2500 acres of vineyards and zoo land than they already get from the regular stipend they get from the trust.

But Joe discounts all these issues and instead arrests Zorah, the head zookeeper, for the murder. Until now, Teddy has only reluctantly assisted Joe in the case by talking to the socialites involved in the case. Though not having the riches of the Gunns and others of their class, Teddy grew up in their circles and has access to gossip and personal contact with the upper class. But with Joe's arrest of Zorah, Teddy determines to do her part to clear her friend's name and get to the bottom of the murder.

<strong>The Anteater of Death</strong> won the Arizona Book Award for Mystery/ Suspense for 2009, and it deserves that honor, if not even greater awards. This book shows tremendous knowledge of life working in the zoo and of many different animals. From the description on Amazon, it doesn't look as if Webb has been a zookeeper, so she obviously did a whole lot of research into zookeeping and animals. I learned so much about anteaters and also about squirrel monkeys and other animals. Further, the book contains details about the birthing of giraffes and mating practices of other creatures as well. I truly felt that I was there at the zoo with Teddy, spending time with Lucy and diving into the bear moat to rescue a boy who has fallen in or trying to locate an escaped monkey.

The plot of this book is really intriguing, with a creative angle and interesting details. The different threads of the murder investigation led to a well- written mystery book. I found it interesting to see how the animals' behavior mirrors that of humans when it comes to how they relate to one another, and this helps Teddy to understand the behavior of the human behind the murder. Further, Teddy models her response to the murderer after the textbook responses to animals exhibiting similar behavior. Webb's manner of introducing these themes is creative and intricate.

As someone who lives with a severe migraine, I appreciated the introduction of a character with her own severe migraine. Jeanette, wife of murder victim Grayson, has had to give up most of her responsibilities, such as being on the zoo board and a voting member of the Gunn Trust, because her migraine has become so severe that she is confined to bed or drugged by her treatment too much of the time. Since migraine is such a prevalent condition, affecting a large percentage of the population, I appreciate seeing it represented in a book.

Hillary Huber performs the audiobook of <strong>The Anteater of Death</strong> and does a creative, interesting job in this. My only concern, which is not even serious enough to call a complaint, is her pronunciation of San Luis Obispo. She mispronounces the name of the city as "San Lewie" instead of "San Lewis." But that was so minor that it is hardly worth bringing up. The voices that Huber uses for each character and her general narration provide strong expression without their being overly dramatic.

I thoroughly loved the experience of listening to <strong>The Anteater of Death</strong>, which is extremely well-written in so many ways. Its way of connecting the animals to humans, offering us a hint to the solution, comes across as fascinating, and I am deeply impressed by the extent of the research performed by Webb into zoo life and animal behavior. I give this book five big, bright stars!

An excellent start to a new series

Betty Webb has done a wonderful job of crafting a cozy mystery series. The characters are well rounded and likable. Hillary Huber brings the characters to life with their own distinct voices. If you're a fan of cozy mysteries, you'll enjoy this one.

This is a new series for me. I saw the 3rd book (The Llama of Death) in the Coming Soon category, liked the description and downloaded this - the first book of the series. It's wonderful! I've already downloaded book 2 (The Koala of Death) and can't wait to read more about Teddy and her friends at the Gunn Zoo! This is a wholesome story with a very talented narrator too! You owe it to yourself to give it a try.

I thoroughly enjoyed The Anteater of Death. It actually has two sources of suspense: the murders that Teddy sets out to investigate, and the daily active life of zoo animals. There are the incidents with the anteater, who I never thought of as a dangerous animal before this book, as well as the incidents with a bear, a child falls into the bear pit, and wolves, a mated pair of wolves have a bloody lovers' quarrel. The author does a good job of comparing human relationships with animal relationships. Through it all Teddy remains calm, in control, and above all puts the animals first. Betty Webb does a good job of creating villains and likeable characters. Hillary Hubbard also does a good job of making the voices different so that the characters had their own individual voices. This is a good book to read while driving or doing house work.

What a fun listen from start to finish.