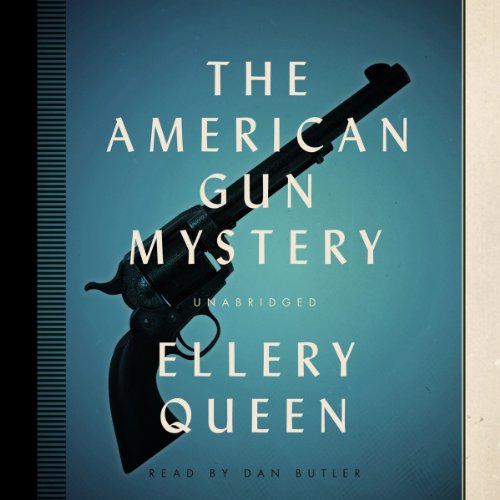 When a Western star is gunned down at a rodeo, Ellery Queen saddles up to solve the mystery.

Buck Horne has roped thousands of cattle, slugged his way out of dozens of saloons, and shot plenty of men dead in the street - but always on the back lot. He's a celluloid cowboy, and his career is nearly kaput. The real box-office draw is his daughter, Kit, a brawling beauty who can out shoot any rascal the studio has to offer. Desperate for a comeback, Buck joins Wild Bill Grant's traveling rodeo for a show in New York, hoping to land one last movie contract. But he has scarcely mounted his horse when he falls to the dirt. It wasn't age that made him slip - it was the bullet in his heart. Watching from the stands are Ellery Queen, debonair sleuth, and his police detective father. They are New Yorkers through and through, but to solve the rodeo killing, the Queens must learn to talk cowboy.

listen to previous books before you record

we listen to many books. in a series the initial readers set the tone for the characters. this reader changed the ethnisity of the inspector to a burlesque Irish man. changed the ponunciation of the sgt. velly. jarring and a very poor job. dont use him again.

This mystery just goes on and on and on. I have listened to 50% of it and cannot take it any longer. I don't know how it ends and don't care. Sorry, just too much description and phoney Irish blarney.

I just discovered these mysteries. What a treat. I am listening to as many as possible. I generally go for mysteries but got sick of the brutality and overbearing suspense. I like to think and not be emotionally burdened. These work for me. I highly recommend. So different but I also love Tanya French.

Plot was good writing was crisp

Only problems was with this was Challenge to the Listener?No it's reader and the Queens are Irish but so far only here the Inspector has an accent.....

Narrator was not right for this book. He did the Inspector's voice like a Scottish brogue ( at least I think that's what he attempted) . It was very hard to understand. Story was ok...not my favorite.

At least it was cheap

Which was my favorite broken nose? That's about what asking for a favorite part of this story is like.

Least favorite has a number of contenders.
- The opening 45 minutes or so concerned the movement of people in the wild west show. None of those movements had any bearing on the case that was to follow and none of it was particularly interesting.
- Inspector Queen had an Irish Brogue accent for the only time I ever heard in the series.
- The solution to the mystery hinges on the hiding place of the gun, but don't waste time trying to work that out. You can't. No one could. The hiding place for the gun is utterly ridiculous if for no other reason than the size of the gun relative to the hiding place. Last time I lost my keys, I didn't look under the last grape in the fruit bowl for the same reason I'd never have looked for a gun where it was hidden. Physics. Things have volume.

What was most disappointing about Ellery Queen’s story?

I've never been a fan of the writing of the Queen stories. The puzzles on the other hand are usually airtight and well crafted. When you finally get the solution you feel like a complete idiot for not seeing them. The technical aspects of the puzzle goes a long way to make up for the cheesy writing.

In this case, the writing wasn't any worse than the puzzle.

In the rest of the series, the voices and accents were kept fairly consistent. In this one, all those were tossed out. I'm willing to give the narrator the benefit of the doubt and say the director made the changes, but you'd think that if you were doing a later book in a series, you might give a listen to the earlier ones, and at least make the nationalities the same.

No. Well, maybe. If there was a guy and two robots in the bottom right of the screen mocking it, I'd see that version. The only way to save this one would be to change the puzzle which would require a massive rewrite, which would make it a different movie than the book

The only reason I didn't give it one star across the board was that some of the character interactions were good and the narrator didn't read the whole thing in monotone.