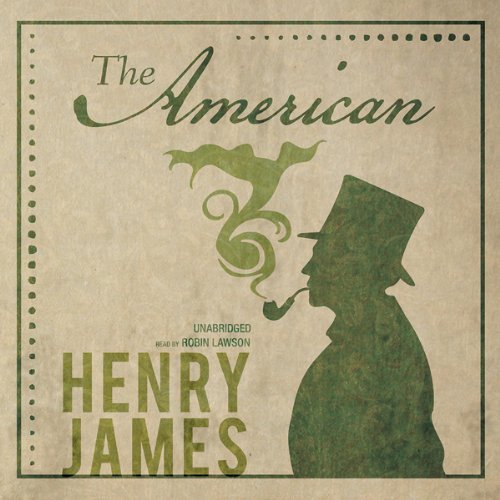 During a trip to Europe, wealthy American businessman Christopher Newman proposes marriage to the scintillating and beautiful aristocrat Claire de Cintré. To his dismay, he comes up against the machinations of her impoverished but proud family, who find Newman to be a vulgar example of the American privileged class. Brilliantly combining elements of comedy, tragedy, romance, and melodrama, this tale of thwarted desire vividly contrasts 19th-century American and European manners.

Literary critic Leon Edel, considered the foremost authority on the works of Henry James, wrote of this novel: “Behind its melodrama and its simple romance is the history of man’s dream of better worlds, travel to strange lands, and marriage to high and noble ladies. At the same time, the book reveals a deep affection for American innocence and a deep awareness that such innocence carries with it a fund of ignorance.”

Public Domain (P)1992 Blackstone Audio, Inc.
Classici
Mostra di più Mostra meno
“A masterpiece of American romanticism in which James shows us his profound grasp of what he was ultimately to call ‘the Americo-European legend.’” (Leon Edel, literary critic, biographer, and foremost authority on the works of Henry James)

I really enjoy Henry James, and this book was no exception. It is a portrait, perhaps one of the earlier, of a character encountered in a number of books (e.g., Sinclair Lewis' Dodsworth): the intelligent, successful, open and likeable American who goes out to see the (old) world and who is somehow completely blind to European social structure and conventions. In some aspects he is naive, but he is not stupid or inexperienced; he is simply unable to grasp the way members of a class-based society perceive humanity. And above all, he is genuinely likeable. I was also somewhat surprised to find that this book was written in 1877 -- to me, it really felt like an early-20th century novel, though I can't explain the precise reason. It wasn't the greatest piece of literature I've ever read, but it was very nice.

As for the narrator: it's really hard to rate him. On the one hand, he has a very warm, pleasant, clear voice, and he has a touch of that slightly outdated American accent which is perfect for the character and the narrator. He makes no attempt at characterizations, which I thought was fine -- I never felt confused as to the identity of the speaker. But the major problem with him is that he simply doesn't know any language other than American. Most of the story takes part in France, and there are quite a few French characters and expressions. For all of these, the narrator sounds like a caricature of an American mispronouncing French. He even mispronounces French expressions that are used in English, such as "coup d'etat" (he pronounces the final t). And the only character he tries to supply with an accent -- an elderly English woman -- sounds more or less like Dick Van Dyke's hilarious mock-Cockney accent in "Mary Poppins". It really sounded as if the main character was reading the novel. And just like the main character, the narrator has such a pleasant and earnest voice that it was hard to "blame" him for this shortcoming -- that's just the way he is.

All in all, an enjoyable if slightly confusing experience.

I do not thing I would recommend this book, unless I knew that friend was looking specifically for something of this period and style. I had a rather trying time with it, for many reasons. I stuck with it (I never like to leave a book unfinished), though the first hour was so slow and dry that it took me a week to get through, and I wasn't sure I could continue. Eventually, though, the plot caught more of my attention, and picked up pace a bit. By midway through, I was wholly invested in rooting for characters like Newman and la Comptess, but constantly had to vent my frustrations with her family by sharing their doings with my boyfriend, who listened patiently and sympathized. I called one or two turns of events as the climax loomed, but am vexed with the denouement. Not unrealistic, in fact probably the truest of realistic outcomes, but so disappointing my hopes. I must be too used to my novels and happy endings. Good book still, I just so wish it had turned out differently.

If you’ve listened to books by Henry James before, how does this one compare?

This was my first Henry James book, and I have not yet decided read another of his works, but I may try again if the narrator is better.

In a nutshell, I didn't like his voice. It had an odd twang sometimes, and his short 'a' sounds were odd sounding. To the point of my absolute distraction. Also I didn't think he did justice to the female characters. Ultimately, I rated it only two stars because it wasn't the worst I've ever heard (he was at least narrating, not just reading aloud), but I believe a good narrator should be heard but not listened too, and I was constantly listening to his diction.

I am a fan of Henty James , but I had never read The American . It was disappiointing . First of all, the story becomes exciting only at the second half of the book. Then this book didn't"t age well , it' s full of cliches : the easy- going American versus the stiff old European nobility. Seriously got tired of it, plus the story is very predictable . Not a page turner indeed butI thought Robin Lawson was doing a good job actually , so I listened til the end.

This is a delightful story. However, the reader does not differentiate the characters with his voice at all, so sometimes it’s challenging to know which character is speaking because of the narration style. I usually listen to books that are a minimum of 20 or 30 hours, so I miss the deeper character development, but I’m enjoying the story.

Poor recording of a dull book

There's a lot going wrong with this audiobook. First, I really don't like Henry James. (Had to read it for a class.) I found this book to be an amateurish effort.
However, even if you like James's work, this recording is a poor production. The reader has a nasal voice and uneven enunciation which, coupled with the low quality of the recording, meant that I missed words here and there. So it's hard to listen to on almost every front.
In the reader's favor, he read in a fairly even cadence, which seemed to fit the tone of the book; no histrionics or goofy voices here. It's simply that he tended to drop off the ending of words and, as the microphone seemed to pick up a pretty narrow range of frequencies, those syllables were lost to me.

Contrast of French and American

The first part was boring, no excitment, but latter part was exciting as it comes to climax.

Slowly comes to the climax

Was The American worth the listening time?

The story developed in the latter part. The contrast of French personality and American personality is worth noticing.

I didn't see the movie, but I think movie is more enjoyable than book.

not a page turner

this book was just okay for me. i don't care for books where the author is reading the book to you in his writing instead of just telling the story, comments like "the reader needs to understand that" just leaves me a bit cold. the story was fine but boring in places but the author did make you care about the main character and his love interest.
i absolutely loved the narrator, his voice and articulation made it seem as if it was the main character speaking and not a story being read. a very talented narrator.
how ever when i'm glad the book has ended even if the story line holds my interest and attention it's a book i don't really feel comfortable recommending.

classic work from the master

a better narrator. This novel was read in a pedestrian manor by someone who was unfamiliar with the pronunciation of British and French names. It was very distracting.

Anger at the choice of reader

Classic novels with foreign words should be read by actors who can pronounce them!

No character definition in reading.

What other book might you compare The American to and why?

This question is irrelevant and irritating.

By failing to differentiate in any way between the characters. A young French girl sounded like a middle aged, nasal American male. Her old aristocratic French father sounded exactly the same. A travesty of a wonderful novel. Can't Americans identify with any culture outside their own?
That having been said, his diction was exceeding clear and precise. Just not creative or interesting.

If you could play editor, what scene or scenes would you have cut from The American?

It's not the scenes it's the reader.