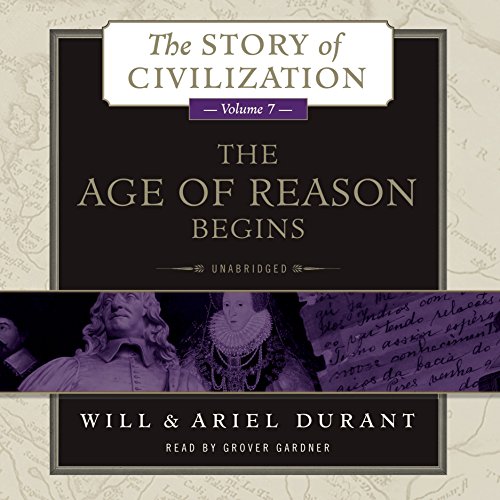 This seventh volume of Will and Ariel Durant's renowned Story of Civilization chronicles the history of European civilization from 1558 to 1648.

The Age of Reason Begins brings together a fascinating network of stories in the discussion of the bumpy road toward the Enlightenment. This is the age of great monarchs and greater artists - on the one hand, Elizabeth I of England, Philip II of Spain, and Henry IV of France; on the other, Shakespeare, Cervantes, Montaigne, and Rembrandt. It also encompasses the heyday of Francis Bacon, Galileo, Giordano Bruno, and Descartes, the fathers of modern science and philosophy. But it is equally an age of extreme violence, a moment in which all Europe was embroiled in the horrible Thirty Years' War - in some respects, the real first world war. This chapter in cultural history is one that can't be missed.

See my review of Volume I for comments of the series.
This is book seven of Durant’s The Story of Civilization.
This, like the other volumes of this series, is wonderful. It is beautifully written, integrated history of Europe over the period between 1559 and 1648. Notwithstanding the title, this only touches on the age of reason at the very end of the volume. Most of the text is dedicated to the struggles in England and the Thirty Years War. The details of war, other than the reasons for the war and the peace, are historical, but not intensely interesting (unless you are really into war). Thus, I did not enjoy this book as much as most of the others, nevertheless the sections on Shakespeare and Bacon, and the very end which covers Galileo and Descartes was fantastic and well worth the 30 years of warfare.

The integrated history attempts to cover all aspects of society in the period, living conditions, industries and commerce, crafts, arts, politics, economics, religion, fads, leaders, and spirit. There are dates, but that is not what it is about. The writing is targeted at general readers with an interest in history, and is a very easy listen.

The narration is clear and powerful and erudite.

I highly recommend this series – at least twice (separated by 10 years). This is my third time.

The entire series is a national treasure. I grew up sifting through the volumes as did my own children. Words cannot convey my delight in finding them in audiobook version. While all three of the narrators are quite gifted, my personal favorite remains Grover Gardner. I'm quite impatient for the rest of the series to be available.

Seventh Gem in a Priceless Series

Will and Ariel Durant were excellent researchers and historians. I’m amazed at how, in the seventh volume of this series, the care and detail given to this work has not changed from its first book. They covered a lot over this specific 90 year period but, to be sure, they could’ve gone into much greater detail as their knowledge was so great.

It’s interesting that this is the first book in the series to have Ariel Durant as co-author. Having read the previous volumes, it’s obvious that she was involved in their production, but I believe she added her own flair to this volume in the way a question would be asked before further investigation, or the announcement of a pause for deeper study would sometimes take place. To my recollection this didn’t happen in earlier volumes (my memory stinks, though, so I may be wrong).

The look into great works of art is always fascinating and nearly every time a piece of work was mentioned, I looked it up on my laptop if it was not pictured inside because the description of monumental paintings is fantastic, making it necessary to see the work that has just been glorified. The same goes for the praised authors. There’s now a list of more books that I’ll eventually purchase because of their influence.

In middle and later chapters, the story of religion’s evolution into various sects (Catholicism, Protestantism, Calvinism, Islam, and the like) are very intense as they politically shaped the world as they do today but in more extreme measures. There was no separation of church and state, so crowns were continuously renounced because of the suspected beliefs of the king or queen, even of family members.

In the final chapters, geometry and physics wage war on religion as the Earth is not the center of the universe, or we do not orbit the sun in a perfect circle. Philosophy evolves because of these understandings and begins to turn from faith.

There’s so much in this book that the review could be pages-long but I’ll end on the notion that Grover Gardner is an excellent narrator. All words are pronounced with such eloquence that it is hard to find a match to his quality. The only thing I didn’t like about this reading was that only two footnotes were read - they were the english translations of poems. Aside from that, a brilliant audiobook that is sure to entertain and educate!

The "Age of Reason" is the 7th volume of Will and Ariel Durant's unsurpassed, yet unsuccessful, effort to write the history of the world's civilization, an 11-volume set collectively called "The Story of Civilization." They published the first volume, "Our Oriental Heritage," in 1935, and their last volume, "The Age of Napoleon," in 1975, thus covering history through 1815.

I must admit here that this is the first volume I bought and read. "The Age of Reason" covers the history of Europe and the Near East from around 1560 until about 1650. The volume contains sections on England and its leaders Queen Elizabeth, Mary, Queen of Scots, James VI and I; on Elizabethan England, the summons to reason from superstition, the rise and fall of Francis Bacon, the religious cauldron, Puritans and the theatre; and writers such as Shakespeare, Marlowe, John Donne, Edmund Spenser, Sir Walter Raleigh and Ben Jonson. I also found particularly interesting sections on the birth of opera and the coming of the Baroque in Italy; the golden age of Spanish literature in Cervantes and Calderon, of Spanish art in El Greco; France and Montaigne, Good King Henry IV and Cardinal Richelieu; the revolt of the Netherlands and Flemish artists Rubens and Rembrandt; Holy Russia and Boris Godunov; the Turks and the decline of the Sultan; science in the age of Galileo, Copernicus and Kepler; and, the rebirth of philosophy with the rationalists like Bacon and Rene Descartes.

I found the writing is astonishingly good and intriguing for a historical book. I have already purchased and listened to 3/4 of Book 8 on "The Age of Louis XIV."

Every sentence is worth reading. The author is not only a very good historian, he is a master at telling the story in a way that engages the reader and naturally leads from one part to another.

Great! I wish audible would get the whole series narrated by Grover Gardner. Fantastic narration.

Things are getting more complicated!

Would you listen to The Age of Reason Begins again? Why?

There's always more to learn and understand. Going over this once you can't get it all. The age of reason builds on the past so there is more to grasp. Great info. I don't know how Will and Ariel were able to digest then share the many facets of the period. I am in awe of their research ability and comprehension to make so many connections.

Gardner never disappoints. I like his smooth clear presentations

It is a history textbook. Very factual without making you wish for an atlas and calender. One two three four.

Religion and Reason in Europe

In the seventh volume of their majestic work - The Story of Civilization - the authors deal with England’s history from Elizabeth’s kingdom to the years before the French Revolution. From there they survey the main facts and the culture’s landscapes of the European States of the time. In an Europe dominated by religions wars, the book describes the politics and culture of the age. In the last part, the work focuses in science and philosophy, pointing to the emergency of reason. Good chapters about Shakespeare, Montaigne and Descartes are presented along the way. Will and Ariel Durant succeeded in combining historical description with the study of the most important characters of the age.

Excellent history of the era between the Reformation and the end of the Thirty Years' War. I found out most valuable for its overview of Elizabethan England.

fantastic ,what an amazing trip through history . it is written well and narrated perfectly , I could not stop listening .

It’s a fascinating panoramic view of this period.
But it’s very dated in many of the opinions expressed by the authors and very verbose.