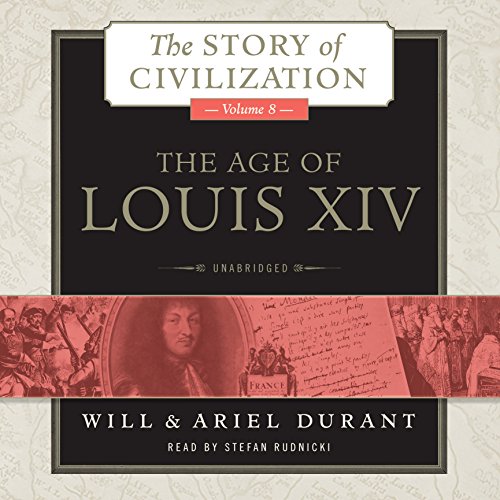 The Age of Louis XIV

The Age of Louis XIV is the biography of a period (1648 - 1715) that Spengler considered the apex of modern European civilization. "Some centuries hence," Frederick the Great correctly predicted to Voltaire, "they will translate the good authors of the age of Pericles and Augustus." Those authors are lovingly treated here: Pascal, Racine, and Boileau, Madame de Sévigné, Madame de la Fayette, and above all the philosopher-dramatist Molière, who so memorably exposed the vices and hypocrisies of the age.

Central to the audiobook is the "Sun King" himself, Louis XIV. Louis XIV ruled France for over seventy years, longer than almost any European ruler in history. He is the subject of a character study that runs through seven chapters, revealing the flesh and blood beneath the purple and the crown. He is seen at his worst in his struggle with Jansenists and Huguenots, at his best in his patronage of literature and art, and at his most human in his love affairs with Henrietta Anne of Orléans, Louise de La Vallière, Madame de Montespan, and Madame de Maintenon.

From France the narrative passes to the Netherlands, and after pausing to examine the domestic idylls of Vermeer, shows the Dutch opening their dikes to save their land from Louis XIV and sending William of Orange to become king of England and a leader of the European alliance against Louis' hegemony.

In England, we contemplate the heyday of virtue under the Puritans and study the strange character of Cromwell. We see Milton's passionate career as part of the vain effort to prevent the Stuart Restoration. We find Charles II, the "Merry Monarch", with more manners than morals, attend boisterous Restoration plays; we skim the diaries of Evelyn and Pepys; and we follow Jonathan Swift from genius to insanity.

Crossing the North Sea, we trace the tragic heroism of Charles XII of Sweden and the attempt of Peter the Great to lead Russia from barbarism to civilization.

One of the Best of a Great Series


This is the 8th book of the 11 book excellent, integrated history, Story of Civilization series. For my review of the series as a whole see my review of “Our Oriental Heritage”.

This is one of the most enjoyable and interesting books of the series. It blends art and philosophy, war and commerce, politics and finance into an enlightening whole. The author gives well balanced portrayals of many of the pivotal figures of the time. The long section on Leibniz was particularly fascinating as Leibniz is often overlooked.

This book starts and ends with the long life of Louis XIV (1643-1715), and he plays a large part in the narrative, but the action is all replayed several times viewed from France, England, Russia, Germany, Spain, and the Netherlands. This repetition of events from different points of view is one of the great things about this book and this series.

The narration is superb, projecting the material with clarity and nuance, including well representing the author’s subtle and wry humor.

This is not quite my favorite book of this series, but it is one of the best.

Most Inclusive History of the Period Yet

The Story of Civilization is a fascinating read. This book, in particular, shed extensive light on a period not necessarily clear to non-Europeans. And none of the histories I've read / listened to by far have had the courage the Durants have to create a digestible but inclusive series of history.

The Day-long duration is kind of intimidating and unappetizing, but when you started listening, it sinks in very fast and you soon realize you've gone through quite a number of hours just by listening to the book. However, the length also means quite a number of the stories told would inevitably be forgotten during the listen, so it's worth repeating the book several times.

Purported history with no support to back it up

What disappointed you about The Age of Louis XIV?

The author makes numerous unsupported judgements about the character and personality of various historical figures. This is not history. This is dogma without citing or reciting primary source material to illustrate his point of view. A reader can find credible history elsewhere.

Loved every minute. Narrator is great. The Durante are masters of the English language. Someday I'll have these in my physical library to re-read.

One of the best in the series

This series never ceases to amaze me in it’s scope and ability to illustrate such a vast sum of history. This has been one of my favorite amongst this amazing series. I am excited to read the next three books to conclude this wonderful series. I am running out of ways to praise how great this series is. It has sparked my love for history and diving into the classics of literature. Thank you to Will and Ariel Durant for all the hard work and research they have put into making this possible.

I love these books. They are very detailed. I find that any Jeopardy question I could answer easily from listening to this series!

Not about Louis XIV

I expected a book about the Sun King and ended up with a history of the time. Not bad, but not really what I expected.

The volume deals with the European civilization in XVII and early XVIII centuries. Beginning with France, the work examines Holland, England and the European’s landscape. Durant’s text pays great attention to the development of art, literature, science, philosophy and, above all, to the relationship between faith and reason. The progressive emancipation of reason and the development of the scientific method is the book’s leitmotiv. The story gives the reader a detailed picture of the Europe in the second half of sixteenth century.

Exceptional summary of the evolution of European civilization during the reign of Louis XIV. It covers the political situation ( of kings, parlaments, wars), art (painting, theater, literature, some music), science and mathematics, religion and philosophy, culture, war, technology. I plan to read the entire series of the Story of Civilization.

The complex and thoroughness of each volume is amazing especially when published before age of computers. Kudos to Durants