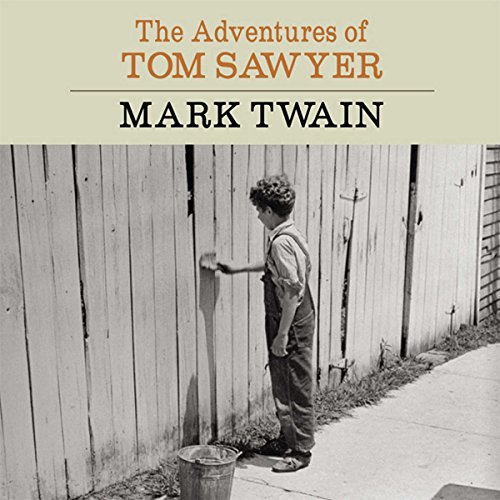 The Adventures of Tom Sawyer

The idealized childhood of this fictional hero, based on Mark Twain's own early life along the banks of the Mississippi, is filled with robust good humor and high-spirited adventures. Yet there is also an in-depth experience of the central South of the 1840s - its dialects, superstitions, and social values. While romping through fun-filled fantasy, Tom Sawyer shows how morally complicated real life can be. In his unabridged reading of the American classic, actor Patrick Fraley crafts 36 authentic "voices" to represent the wide range of Twain's delightful characters.
(P)1995 by The Audio Partners Publishing Corp.

A story my 9-year-old keeps returning to

One reason I got an Audible membership is to purchase titles that I can let my homeschooled children listen to -- great, classic literature especially. Of course, Tom Sawyer is an example of great American literature, and I don't have time to read it to my kids (oldest of whom are 9 and nearly 7). I will confess at this point that I haven't listened to the entire Tom Sawyer story -- yet. I am working my way through the excellent read. But I'm already giving this story a 5 star rating because of how it captivated my two kids, especially my 9-year-old boy. My son keeps playing and replaying the story because he enjoys it so much! I'm thrilled that he's immersing himself in some fun, well-written literature, and he's enjoying himself listening to the exploits of a boy probably not much different than he is, except my son is growing up in 21st century America. The story narrator is absolutely wonderful. I've found myself listening and re-listening to some of the story's early selections just because the narrator does a masterful job of both narrating the story and casting unique voices and personalities onto the story's characters. I marveled that another reviewer gave Tom Sawyer a 1-star rating saying his family couldn't bear to listen beyond the first two hours. I'm experiencing quite the opposite reaction in my own household. If you have children -- and even if you don't -- I think you'll most likely enjoy this story very much.

Well worth a listen

Both this selection and Huckleberry Finn, read by Patrick Frawley are unbelivably excellent and the best selections I have purchased in the past year since signing up with Audible. Patrick Frawley makes the books come alive. He does each character so individually that you'd believe different people were reading each part. Mark Twain would be real proud to hear this interpretation of his wonderful story.

"The Adventures of Tom Sawyer" was rather interesting in that it illustrated rather vividly the society, thoughts, motivations, and actions of children, young boys in particular. Yet, as amusing as Tom Sawyer's antics and adventures were as well as the author's satirical comments regarding this-or-that, I still found myself bored. This audiobook held my attention for, perhaps, the first 3 hours. After that, I found myself increasingly reluctant to continue to listen, my mind apt to wander off, and the 30-sec rewind button all too frequently employed. I cannot say whether it was due to the narrator or the book in general. I am inclined to think that it was the book - with the narration being just not spectacular enough to compensate for it.

I thought that the narrator did a decent job with fairly distinguishable voices for the various characters and quite a good job with the voice acting. The voices he did best were of the adult men. His children's voices were not so great. I actually was persuaded into purchasing this audiobook based on the sample of Aunt Polly's voice. I liked the way the narrator did her voice - as well as those of other women. The adult female voices weren't as well done as the adult male voices, but they were still a lot better than the children's voices. Since the majority of the dialogue were from children, I was a bit disappointed about my purchase.

The narrator's speaking voice was not very irritating to listen to. He did affect some kind of Southern drawl. I could not say whether it was natural and representative of the location this book was set in, but it did help to anchor me to the setting of the story. Only on occasion, I found this drawl a bit annoying, but for the most part, I thought that the narration was okay.

This audiobook has some fiddling (I hesitate to say music because it wasn't quite that). I was not a huge fan of it. It was mostly used to signal the start of a new chapter or section. It was occasionally grating.

Would I read another book by Mark Twain? I cannot say. I have had Huck Finn's book on my TBR for the longest time, but I hesitate to read it. Would I listen to another book by Patrick Fraley? Maybe. I'd hesitate more to listen if it was "Huck Finn" and be more willing if it was an entirely different book/author.


A portion of this review was cross-posted from Goodreads.

Outstanding Reading of a Classic

If you are an adult like me, it's been a while since Tom Sawyer was on my required reading list. When my 12 year old was assigned the book as summer reading, I thought it might be fun, helpful and different to find an audio version to listen to as he followed the text, and then I could listen to it as well in the car as I drove to and from work. What I found was that Patrick Fraley's dead-on voice characterizations of Tom, Huck, Aunt Polly and especially Injun Joe made this work come alive for both of us. The book is as funny as it must have been when it was published, and the creative reading by Fraley adds immensely to the overall understanding and entertainment value of this classic. An added benefit was the fact that the reading helped my 12 year old get through the Southern dialect which would be otherwise difficult reading. What a gem of an audio work!

This familar story of Tom Sawyer's adventures is superbly dramatized by the narrator. Even though you read the book in the past, you will be very impressed with this narattion of the timeless classic

This book is a classic and Mart Twain was a great writer. The narration in this is FANTASTIC! Patrick Fraley does a great job of reading this and The Adventures of Huckleberry Finn. This is one of the best audio books I have heard.

Kudos to Patrick Fraley, whose pitch is perfect with respect to Twain. There's no artifice in his performance: you forget that he's reading and feel as though the characters have come alive in your head. Fraley handles Twain's sublime way with words with aplumb. Would that all audiobook readers had his talent.

We listened to this book on a long cross country car trip and enjoyed it very much. Our eleven year old son liked it best of all and was ready to listen to more! Having read the book as a teenager and seen countless TV adaptations, I can say that the audio version really does the best job of bringing the story to life and spurring your imagination.

When I was young this book had a profound influence on me. It was such a pleasure to rediscover this almost 20 years later, and remember the times when I tried to recreate all of Tom's adventures.
The narrator was stellar. Such a terrific job, and he captured the humour so well. I laughed out loud at his acting when the boys got sick from the pipes. Thank you for this beautiful reading.

You can read (listen) one more time the Adventures of Tom Sawyer and find something new or interesting or a bit of social understanding you had not heard before.

The reading is very good. I heard 3 minutes of other readers and did not like them. Only Becky Tatcher's voice was a little disappointing.

Pat Fraley's performance truly brings Twain's classic to life!! So amazingly enjoyable and funny in so many parts...a MUST HEAR!!!

Patrick Fraley is a master story teller and really does bring the characters distinctly to life. Kids will be entrances. There's a reading by him of Huck Finn as well which is just as good and highly recommended.