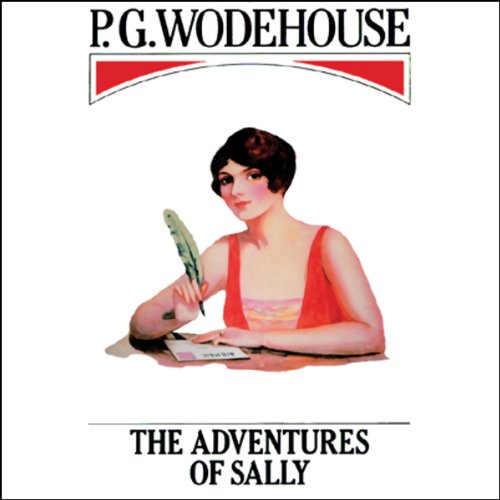 Pretty, impecunious Sally Nicholas never dreamed a fortune could prove a disadvantage, until she became an heiress and watched in bewilderment as her orderly existence went haywire. Coping first with her brother's wild theatrical ambitions, then with the defection of her fiancé and his immediate replacement by a much more appropriate but strangely unattractive suitor, Sally finds that life in New York is becoming altogether too complicated, and a trip to England only makes the whole situation worse.

But just as Sally is concluding that she has disastrously misplaced her bets, it looks as if a piece of speculation about an outsider might just give her adventures a happy ending.

P.G. Wodehouse is in sparkling form, in a story set on both sides of the Atlantic in the Roaring '20s.

While the story is clasic Wodehouse (post 'school stories' and pre-Wooster), the narration by Frederick Davidson leaves much to be desired. His rendition of American accents is stilted yet robotic, which unfortunately distracts the listenter from savoring the comedy that Wodehouse is known for. Four stars for the story, but only one for the audiobook narrator.

“A jerky, choppy book. Mrs. Meecher's lodging house in New York is Dickensian. Several short story themes are tied up untidily together, and there is a scrambling of loose ends to finish up.” Thus Richard Usborne, in his ubiquitous “Plum Sauce: A P. G. Wodehouse Companion”. And I suppose he’s right. Sally’s loyalty to those who shared her impecunious days at Mrs. Meecher’s does get a tad glutinous; in his early books, Wodehouse tends to make paragons out of his heroines—not surprising, as he made the shift from light romances to lighter comedy. And, like all great artists, PGW certainly recycled material. I even agree about the jerks and chops—from romance to humor to a shot at poignant tragedy (see Gerald Foster’s drunk scene), though I can’t say any of that has ever bothered me. I say “ever” because this is probably the 15th or 20th time I’ve listened to this book. Doing the dishes, mowing the lawn, or sipping a cocktail, chances are very good that I’m listening to Plum. I use Wodehouse like Butler Beach uses port—to steady the nerves and impart a genial glow. And, even granting all Mr. Usborne’s insights, I’ve come to appreciate the early work just as much as the masterpieces—mostly for those flashes of the mature style that burst out so unexpectedly (like a proposal of marriage to Sally interrupted by two waiters arguing in ersatz Italian). Though written around the same time as Wodehouse’s first great short story collections (The Clicking of Cuthbert, The Inimitable Jeeves) Sally is just a mildly funny, amusing romance that makes me smile. Of course, Frederick Davidson’s suave, nuanced reading helps it all go down easy, too.

I only wish PJ W had written more books with a female lead! Sally is a gem and this book an old favorite.

The narrator made all the characters sound boring and selfish. If you like Wodehouse this will be very disappointing.

The Adventures of Sally is an early Wodehouse (1922) before he really got into his stride with Jeeves and Blandings Castles stories. His trademarks of superb prose, affectionate humour and daft yet intricate plots are all in evidence but they are not in the same class as vintage Wodehouse.

Frederick Davidson is a very fine narrator with the right book - for example his Vanity Fair would be hard to beat. But his naturally ironic style simply does not suit the book. You need a narrator like Martin Jarvis or Jonathan Cecil who are both past masters with Wodehouse.

I could not recommend this audiobook to anyone but a dyed-in-the-wool Wodehouse fan (as I am!). I am not sure whether there is another version, but if not, better to read the book.

An early Wodehouse, and pretty disappointing. Basically just a romance. Wodehouse is not on his form, this is neither witty nor outrageous nor daft nor zany and definitely not laugh-out-loud funny. And some of the descriptive passages go on a bit! Vintage Wodehouse never never wastes a word. This one was really not worth resurrecting as an audiobook. The narrator does a pretty good job, but I wouldn't want to listen again.

If you could sum up The Adventures of Sally in three words, what would they be?

Sally- so kind and helpful but determined and humorous as well

Have you listened to any of Frederick Davidson’s other performances? How does this one compare?

Just as good. His voices and accents are brilliant and varied

The end was a delight. There had been so many twists and turns that it was not at all predictable

Considering how many books Wodehouse wrote, I am constantly amazed by his brilliant plots and although everyone loves the Blandings novels and Jeeves and Wooster, he is constantly inventing new characters both American and English in his other books- fantastic!