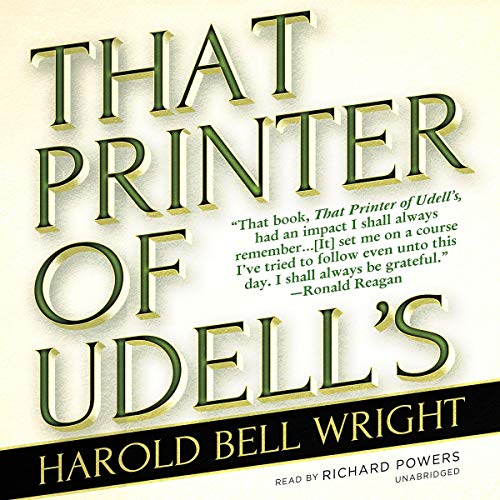 As a boy, Dick Falkner ran away from abject poverty and an abusive alcoholic father. Sixteen years later, he finds himself hungry of body and empty of spirit in a Midwestern town. Although he finds no help in this so-called Christian town, he is eventually taken in by George Udell, a local publisher and kindhearted man. Through hard work and Christian morals, this man, who becomes known as "that printer of Udell’s", rises above his past to a new, inspiring life with God.

Harold Bell Wright (1872-1944) was a best-selling author who is said to have been the first American writer to sell a million copies of a novel. More than 21 movies were made or claimed to have been made from his stories, including Gary Cooper’s first major movie The Winning of Barbara Worth and the John Wayne film The Shepherd of the Hills. Behind all of his works lies the simple desire to write about the goodness of mankind.

"That book, That Printer of Udell’s, had an impact I shall always remember.... [It] set me on a course I’ve tried to follow even unto this day. I shall always be grateful." (Ronald Reagan)

I would consider this one if Harold’s better books, and one that more fully expresses his views of Christianity, the church, and society. The storyline is good, not as riveting as some, but a lot better use if time than most riveting books I’ve read. The reader? Best I’ve heard yet.

Loved this story and the message of benelovence it shares. the Performance was outstanding! I highly recommend it to both "the church goers" and the followers of Christ.

Most inspiring novel I've ever read.

This is one of my favorite novels, and one of the most impactful books of any kind that I have ever encountered. It is an incredible portrait of hypocrisy and genuine repentance, pain and forgiveness, sin and redemption -- a portrait of Christ's love at work in the hearts of His people. It isn't a children's story by any stretch: it can be very heavy at points. But supposedly, this is the book that both made Ronald Reagan want to become a Christian, and motivated him to become President of the United States. I hope you find it as inspiring as I have.

Soooo well done. Gorgeous book, beautiful performance of the narrator. A wonderful story that I will be listening to again!!!