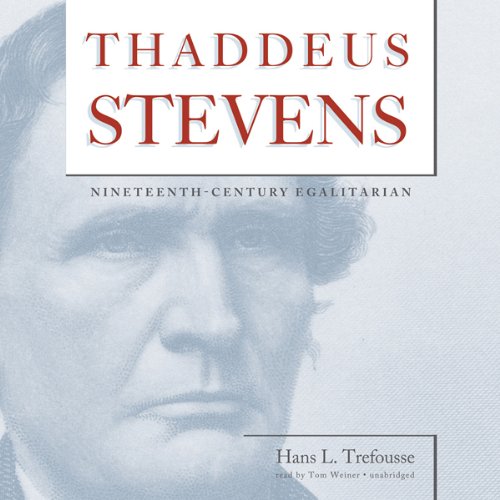 One of the most controversial figures in 19th-century American history, Thaddeus Stevens is best remembered for his role as congressional leader of the radical Republicans and as a chief architect of Reconstruction. Long painted by historians as a vindictive “dictator of Congress”, out to punish the South at the behest of big business and his own ego, Stevens receives a more balanced treatment in Hans L. Trefousse’s biography, which portrays him as an impassioned orator and a leader in the struggle against slavery.

Trefousse traces Stevens’ career through its major phases, from his days in the Pennsylvania state legislature, when he antagonized Freemasons, slaveholders, and Jacksonian Democrats, to his political involvement during Reconstruction, when he helped author the 14th Amendment and spurred on the passage of the Reconstruction Acts and the impeachment of Andrew Johnson. Throughout, Trefousse explores the motivations for Stevens’ lifelong commitment to racial equality, thus furnishing a fuller portrait of the man whose fervent opposition to slavery helped move his more moderate congressional colleagues toward the implementation of egalitarian policies.

©1997 the University of North Carolina Press (P)2013 Blackstone Audio, Inc.
“Thaddeus Stevens has long deserved a discerning, fair-minded, knowledgeable, meticulous biographer; he has finally found him.” (James M. McPherson, Pulitzer Prize–winning author of Battle Cry of Freedom)
“This book is well researched and engagingly written and is likely to become the standard biography.” ( Choice)
“An especially valuable addition to Civil War literature. This is now the definitive work on Stevens.” ( Library Journal)

Like Schoolhouse Rock's "How a Bill Becomes a Law"

Like Schoolhouse Rock's "How a Bill Becomes a Law" without the music or humor.

Biographies of influential Representative/Senators is always tricky because the biographer has SO MUCH material to work with on the legislative side that the result is often just a selection of floor debates or an summary of the byzantine nature of how a bill moved through committee. As legislative history goes, it's adequate. As a biography, it's lacking.

Thaddeus Stevens became the most visionary white politician in the history of this nation! He had the foresight to understand America could never truly prosper, unless all citizens experienced freedom, justice and equality!

Great read. Thanks for your contributions to black people. Your leadership will always be remembered

Thaddeus Stevens was ahead of his time ...an Abolitionist who was in the House. Great.

Would you try another book from Hans L. Trefousse and/or Tom Weiner?

Would you ever listen to anything by Hans L. Trefousse again?

Not much he could do. The book was written at most at high school level.

What character would you cut from Thaddeus Stevens?

This book is not for adults. It appears to be written for someone with little to no historical knowlege. It should have been listed, at most, as a "young adult" book.