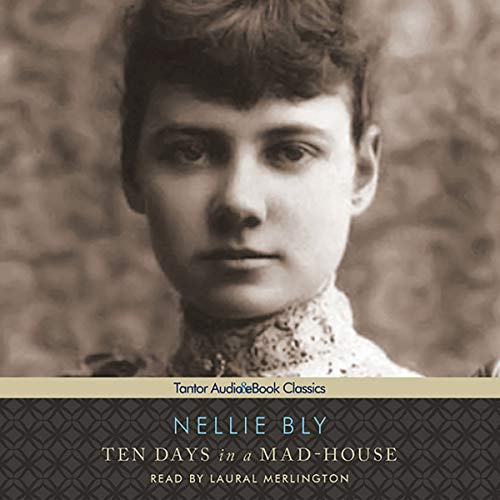 In 1887, Nellie Bly had herself committed to the notorious Blackwell's Island insane asylum in New York City with the goal of discovering what life was like for its patients. While there, she experienced firsthand the shocking abuse and neglect of its inmates, from inedible food to horrifyingly unsanitary conditions. Ten Days in a Mad-House is Bly's expose of the asylum.

Written for Joseph Pulitzer's New York World, Bly's account chronicles her 10 days at Blackwell's Island and, upon its publication, drew public attention to the abuse of the institutionalized and led to a grand jury investigation of the facility. Ten Days in a Mad-House established Bly as a pioneering female journalist and remains a classic of investigative reporting. This edition also includes two of Bly's shorter articles: "Trying to Be a Servant" and "Nellie Bly as a White Slave".

Laurel Merlington was the perfect voice to narrate

She was able to tell this story so well, I felt like I was listening to Nellie Bly herself. She made it interesting and easy to distinguish by giving different characters different times of voice and accents. The story was great too, I felt like I was there with Nellie as she endured hardship to help the people have a better life.

Nellie Bly is an American hero!

From start to finish, I was engaged in this book. Nellie’s bravery and tenacity led to the uncovering of the despicable treatment of mental patients in 1880’s America. If not for her, I don’t believe the mental health sector would be what it is today!

I listened to this book in one sitting, and it was an incredible look at the treatment of those deemed “insane” on the smallest infractions. I think everyone should read or listen to this book!

This is an amazing story by it's self but considering the timeframe and how little rights women had the shear courage Nellie Bly had to be a pioneering investigative reporter is astounding. Why are these type of books included in the school curriculums I wonder!

loved the book and this

i actually work with people who are mentally challenged and I love this book and to be able to see how they treated them back then is not suprising. People were very cruel I will listen to this again.

Talk about getting change for others. Wow. she took a rick that pain off, outstanding.

This is a really great story. I didn’t like the fact that the last few chapters were additional experiences of the reporter. I was really in tuned with the “mad house”. I would recommend this read to others.

This was an incredibly fascinating and sad story. It's a shame how those poor women were treated. This book made me want to dive deeper into Nellie Bly's life and find more of her work. I felt the story about her time in the asylum ended abruptly, but that was my only complaint. The narrator's voice was strangely soothing and she did a fantastic job changing voices for each character.

Nellie Bly's bravery threw open the medieval doors to the then barbaric world of psychiatric "treatment" facilities. Thank you for all your courageousness!

loved it, Open your mind to so much. recommend to all with a good heart.

I loved every second of it. Never living through or around this, I had no idea what life was like back then.

a captivating story taking you into the asylum and also the late 19c American era. wonderful.