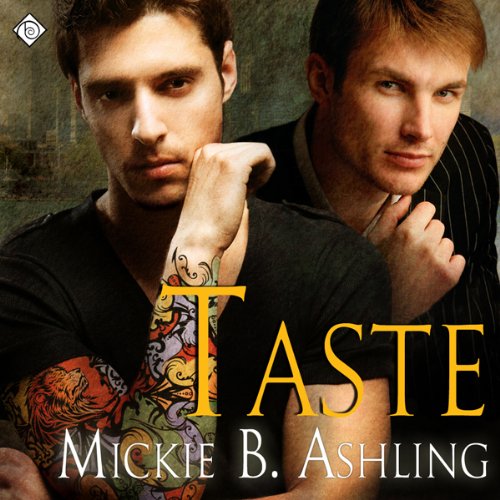 What should have been a brief interlude turns into something deeper when Lil Lampert meets Grier Dilorio at the Taste of Chicago. Lil is in town visiting good friends Jody Williams and Clark Stevens, and he didn’t plan to hook up with a younger man and discover a mutual love for architecture, interior design, and a unique sexual kink that keeps Lil coming back for more.

By all appearances, Grier is the quintessential bad boy who loves speed, tattoos, and leather, but Lil slowly uncovers another side: selfless, responsible, and tender, especially for Luca, the son he’s had to deny. With Lil’s love and support, Grier will make a decision key to opening the door to a possible future together, one that includes fatherhood, something Lil has dreamed of but has never dared to explore.

Would you listen to Taste again? Why?

I probably will in a few months when the next story in the series is released.

The first few minutes of this story made me stop and download another. Unfortunately, that one was even worse. I went back to this story and once I gave it a change (after about 10-30 minutes) I was completely enthralled. A surprisingly wonderful story that kept me engaged until the end. Uncharacteristically, I kept listening to the story even after leaving work and finished it in one day. I even looked for the next book in the series. Can't wait until the next book "DADDIO" is available!

Let me start out by saying the only reason I got this book was b/c Paul Morey was the narrator. However, I didn't realize this was Book 2 in the 3 book series. Especially since Book 1 is not on Audible. I love Paul's narration, so that was 5 stars. However, the story was a little weak and not as engaging as I like; I didn't really feel a connection to the couple. It also didn't help that I'm not into Leather and Lace, which is a big part of the relationship btwn the MCs. I didn't really get that from the description. There is no BDSM, but big men in lace underwear and cross dressing is really not my thing. There were also small unrealistic things like a MC who lives in San Francisco but is scared to death of earthquakes. And b/c I live in Chicago, I was sensitive to some inaccuracies in the story about Chicago. I didn't read the 1st book, which I would like to have read before this one b/c that couple (Clark & Jody) have a large influence on this story. There is a 3rd book that looks like it is a continuation of this story; and probably Clark and Jody's. Overall, it was OK if you can get past the lace panties.

I was not so into it at first but as the book progressed and the characters and storyline blossomed I really started to enjoy the book. I felt so bad for Grier with the situation he found himself in and was rooting for him throughout the book.

The narrator was good as always, Paul Morey is one of my favorite narrators.

I love to hear Paul Morey narrate. This is a well-crafted story brought alive by the reader. Good characters, a sweet love story, and sexy men! I hope DSP will record "Daddio" as well, with of course Paul Morey narrating.

A review of Taste

What did you love best about Taste?

It was a well written and narrated story.

The chemistry between Lil and Grier, it was instantaneous but still believable and passionate.

What does Paul Morey bring to the story that you wouldn’t experience if you just read the book?

His voice, that's what. I think Morey is the best M/M narrator there is today. He has a very sexy voice, and the nuances, accents and tones he brings to the story just add to the writing.

If you could rename Taste, what would you call it?

Lil Lampert is vacationing in Chicago with his best friend Jody and Jody’s husband Clark (book 1 in the series) when he meets the younger, sexy, tatted up Grier Dilorio. The Taste of Chicago is an annual fair with flare and food abounding, and Lil is enjoying every delicious mouthful. He ends his first day at the fare with a mouth watering kiss from the handsome stranger, and the promise of a date that evening.

While both men are in the mood for some fun, and the attraction won’t be denied, they also realize that some fun with a few fringe benefits is all they could possibly share. Lil is heading back home to California in a week, and Grier would never leave his family or his son behind. They are determined to enjoy what little time they have though, but Grier’s family and friends are determined to make that difficult.

Grier is not in the closet, but his family chooses to ignore his sexuality. When he was still a teenager he had an ill fated night with his best friend Jillian that resulted in a child. Jill convinced Grier that they should keep the fact that he is the father of Luca from their families, so the last eight years he’s been there for Luca in every way aside from acknowledging his parentage. And with Grier having found a man he can see spending the rest of his life with, his brother and Jill, who are now dating by the way, launch a full on assault with snide comments and homophobic attitudes that they’ve kept to themselves until now.

With Lil’s help, Grier will face the demons of his past so that he can move forward. The question is, will they move forward together? Or when Lil goes home will that be the last these two instant and intense lovers see of each other?

A story of insta-love that is wrought with emotion and betrayal. Grier has always believed that he was doing what was best for his son, and always trusted Jill to hold true to their mutual understanding. And everything is fine and hunky dory until Grier finds someone to love. Jill goes out of her way to belittle the man that is supposed to be her best friend, becomes a bigot overnight. I truly hated this woman! But then the balance was Lil. Grier and Lil barely know each other and yet, Lil is standing by his side ready to fight for him, with him, for what is right. I truly loved this man!

Narrated by the best in the biz, Paul Morey, Taste kept me entertained and engrossed from start to finish. Morey can tell a story like no other, so when he has such an intriguing story to work with and convey to listeners, so that you can still have a solid grasp of the characters and storyline, it’s fantastic. To say that Grier and Lil have an instant and intense connection is almost an understatement, their chemistry was off the charts sexy. And Grier’s little kink, while I found it odd at first, it was written in such a way that it became just another part of him, almost like an appendage.

If you are a fan of the insta-love stories, struggling and overcoming, a little bit of a lingerie kink and Paul Morey’s sultry voice that just drips off your ear buds like honey off the comb, then you don’t want to pass this one up!

Very Cute m/m romance... I am a big fan of m/m romance... there should be more on audible... with good story lines like this one... and Morey is a great narrator... this was my first ashling book. I hope audible put more on here... I will give them a try...

I got about 15 min in, and found the protagonist so annoying that I just had to go nope!

I loved this story!!!

This story was great! I would highly recommend! The narrator of course was amazing. I loved everything about this book the falling in love, and the little kink didn't throw me off just surprised me. I just love HEA stories!!;;

Unrealistic character manipulation of some strange emotional blackmail with circumstances that were down right laughable. Sex scenes were boring and vapid. I kept listening thinking that the book would turn to the better but failed to keep my interest. In the end I found I was never really was engaged in any of the characters thus I didn't care about what happened.