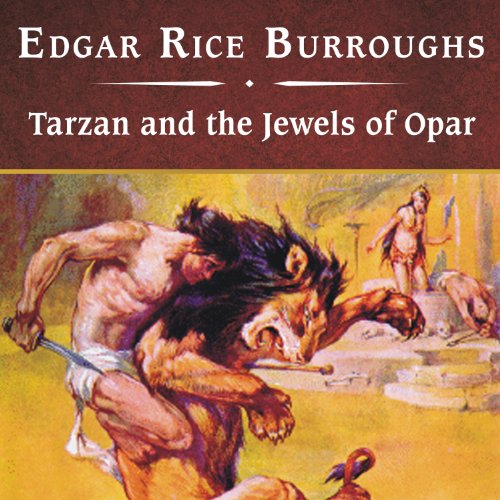 Tarzan and the Jewels of Opar

A spy, Albert Werper, has been sent by Tarzan's long time foe, Achmet Zek, to abduct Jane. His plan changes when he discovers that Tarzan is bankrupt and must return to the lost city of Opar to bring back more gold. While Tarzan and the spy are in the treasure tomb, an earthquake strikes Tarzan down and blocks the exit. The only way out leads Werper to the sacrificial chamber of the Flaming God, where he soon finds himself the next victim. Tarzan is quick to recover his strength, but not his memory!

Tarzan is the original super hero, one most of us would like to be. It is easy to surrender ourselves to the thrill of his exploits in the damp African Jungle, yield to the pull of primitive impulse, and imagine we are back again in pre-historic times, swinging from tree to tree in glorious abandon through the primeval forest or fighting the great cave bear with rude stone weapons.

Another exciting fun and unbelievable tale of adventure. Well done and fun, I like to mix audible with the written version. Bad guys, lions, and apes mixed in a fresh smorgasbord of vintage Tarzan.

More of a short episode than a book.

this was pretty good story. however, I was a bit disappointed how the new characters we're only meant to stay in this book and be one-off villains. I was confused in parts of the book when he would say a name of a character and I thought they were dead but it turns out they weren't, as if the author forgot about that character completely. aside from that, the villains were pretty good and the plot was alright, it's just crazy how much trouble came from a bag of jewels. the author must have had a lot of fun spinning that web of craziness. this story felt like a short episode that was a side Adventure and didn't have that much effect on our main characters. probably because there doesn't seem like anything that will carry over to the next book. I guess I will have to read it and see.

As always Burroughs spins a good yarn. As with all the Tarzan books it’s quite racist, so not for the young.