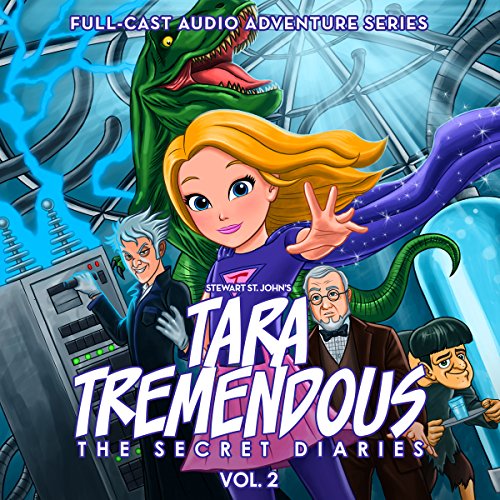 The story of 11-year-old Tara Callahan - who accidentally acquired the superpowers of every hero on Earth after stopping Dr. Epic's evil plot to steal them for himself - continues in this thrilling second volume in the Tara Tremendous: The Secret Diaries series.

Created, written, and directed by award-winning television writer Stewart St. John (Sabrina: The Animated Series, Seventeen Again) and produced by St. John, Todd Fisher, and Michael Plahuta specifically for the audio format, Tara Tremendous: The Secret Diaries is based on St. John's number-one iTunes children and family podcast. The action-packed series follows the inspiring adventures of 11-year-old Tara Callahan, who goes from ordinary to extraordinary overnight when she accidentally acquires the powers of every superhero on Earth. Now Tara can tap in to any superhero power she wants - from Sir Alchemy to Silver Moth to Tremendous Man and Dina Dinosaurus - but first she's got to learn how to summon - and use - her newfound abilities!

Through dialogue, sound effects, and music, listeners are introduced to the world of Tara Tremendous, where they'll discover a full cast of characters, thrilling soundscapes, a heart-pounding music score, and fully produced original songs in an audio experience that elicits a visual mindscape and sparks the imagination of both kids and adults.

Intended for ages six and up, volume 2 features four new exciting episodes. Saying a final good-bye to her mom and dad, Tara accompanies Power University's headmaster, Mr. Barrington, as they teleport to Power U - but the trip is interrupted by Dr. Epic, who has plans to steal Tara's newfound powers for himself.

The episode also features brand-new original songs including "So Close" and "Welcome to Power U" - composed and written by the off-Broadway musical team of series creator Stewart St. John & Michael Plahuta.

So get ready to experience the incredible story of one girl's journey to become the most powerful superhero in the world in Tara Tremendous: The Secret Diaries!

And the fun and intrigue continue...

In this volume, it was fun to learn more about the main characters who are a part of Tara's new life. I really enjoyed the banter between Dr. Epic and 1102. And, Tara is so well cast. I can't imagine anyone else as Tara. Her voice is exactly as I would imagine it to be if I were reading a hardcopy of the book.