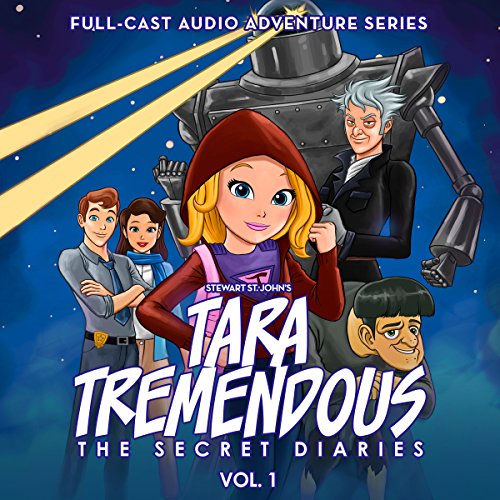 Created, written and directed by Award-winning television writer Stewart St. John (Sabrina: The Animated Series, Seventeen Again) and produced by St. John, Todd Fisher, and Michael Plahuta specifically for the audio format, Tara Tremendous: The Secret Diaries is based on St. John's number-one iTunes children and family podcast. The action-packed series follows the inspiring adventures of 11-year-old Tara Callahan, who goes from ordinary to extraordinary overnight when she accidentally acquires the powers of every superhero on Earth.

Now Tara can tap in to any superhero power she wants - from Sir Alchemy to Silver Moth to Tremendous Man and Dina Dinosaurus - but first she's got to learn how to summon - and use - her newfound abilities! Through dialogue, sound effects, and music, listeners are introduced to the world of Tara Tremendous, where they'll discover a full cast of characters, thrilling soundscapes, a heart-pounding music score, and fully produced original songs in an audio experience that elicits a visual mindscape and sparks the imagination of both kids and adults.

Intended for ages six and up, volume 1 features the introduction of a cast of unforgettable recurring characters including Tara Callahan; her parents, Detective Nick Callahan and Jennifer Callahan; the wickedly eccentric Dr. Epic; and Epic's long-suffering but loyal creature-servant, 1102. There are also superheroes galore in a universe series creator St. John has been creating since childhood.

In addition to the catchy theme song, original songs include "All I've Ever Wanted", "Step Right Up!", "Here I Am", and "Believe" - all composed and written by the off-Broadway musical team of series creator Stewart St. John and Michael Plahuta.

So get ready to meet Tara Callahan, the 11-year-old-girl who accidentally acquires the powers of every superhero on earth. How does she go from ordinary to extraordinary overnight? What will she do with her newfound powers? And why is she now hunted by the super villain Dr. Epic? The incredible story of one girl's journey to become the most powerful superhero in the world begins now in Tara Tremendous: The Secret Diaries!

A wonderful intro. Eager for the next volume!

What I love about this first volume of the Tara Tremendous series is that it pulls me in and makes me want more. I'm very much affected by voices and how they fit into the story. The voices for this story are perfect for the roles and the accompanying music very much adds to the intrigue of the story. I'm eager to hear more!