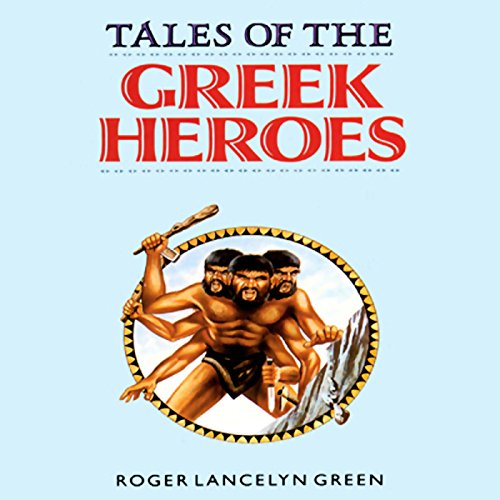 Tales of the Greek Heroes

Gods and heroes are brought to life in this masterly retelling of the legends and tales of ancient Greece.

Here are the great stories of the Heroic Age, from the myths of the making of the universe to the death of Heracles. Set against the colorful background of Greece and the Aegean, the adventures of heroes such as Perseus the Gorgon-slayer, Dionysus, Theseus, and Jason and the Argonauts once again come to life.

In this skillful retelling, these tales are as vivid and exciting as when they were first told 3,000 years ago. The story of ancient Greece is continued in The Tale of Troy.

I greatly enjoyed this title and can recommend it to anyone. It was a lot of fun. The speaker was easy to listen to. Also I do believe it can be recommended for teens as well as adults; many of the more graphic ideas in Greek myth have been glossed over. It's fun, easy to listen to and an easy way to learn more about Greek mythology.

The book does a good job of telling an overview of the Greek Heroes. My complaint is that the audio has some sort of rythym similar to being paused, forwarded, and then restarted after each sentence completes in much of the reading. It's as if the audio is actually a patch work.

I loved the informative book, but the narrator’s voice got a little annoying at times

Its okay for kids.

The narrator could be better. The story is told for an audience of children so it's quite filtered.

Interesting stories, but listen to the preview

This book is interesting and clearly narrated, however an issue that I have found with the book is the American accent. No fault of the narrator himself, however small differences between British English and American English made it difficult for me personally to get into this without every now and then finding myself irritated by certain pronunciations, such as pronouncing herbs, erbs.

The narrator sounds bored and robotic, would not recommend this audiobook. Search the abridged version with Rula Lenska instead - much more soothing narration