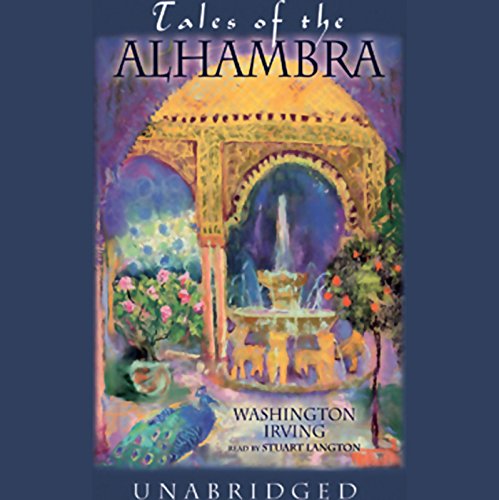 Tales of the Alhambra

Written in 1831, Irving's dreamlike description of the Alhambra, the beautiful Moorish castle that defined the height of Moorish civilization, and the surrounding territory of Granada remains one of the best guidebooks to the region and one of the most entertaining travelogues ever written.

A heady mix of historical fact, medieval myth and mystery, sensual descriptions, and an appreciation for a civilization which valued beauty, philosophy, literature, science, and the arts on an equal level with warrior skills. Secret chambers, desperate battles, imprisoned princesses, palace ghosts, and fragrant gardens, described in a wistful and dreamlike eloquence will transport the listener to a paradise of his own.

The narrative is bewitchingly enhanced by Spanish guitar music. Tales of the Alhambra is a delightful offering for the romantic on anyone's holiday list.

I can hardly express how much I enjoyed this book! The detail that Irving wrote allowed me to see what he saw in the Alhambra, along the road to from, and the environs of Granada with great clarity. The way he describes the people--in real life and in the stories--caused me to see and understand them well; additionally the descriptions are frequently rather funny. The stories are in the Arabian Nights tradition and throughly enjoyable. Each one is interesting, exciting, and has an ending in which right triumphs. The end of each story left me with a positive sense of satisfaction. This entire volume is appropriate for family listening; perhaps something much better to excite imagination than a pile of DVDs for the kids on a family vacation road trip.

The reader has a voice that fits perfectly with the material. I found him easy to listen to and clear in his reading. As the book ended I felt truly sad that it was over. I will listen to this book again, and I don't think or feel that way about most of the books I listen to even if I have truly enjoyed them. I heartily recommend this book to anyone who savors wonderful stories, read well.

You will be transported to Andalusia.

Last night I stayed up until the wee hours of the morning listening to this wonderful book which paints the picture, the history and the culture of the Alhambra in such vivid detail that I was enchanted and transported. I could see the beautiful mosaics and hand carved details. I could smell the spices. I could feel the chill of the night in the mountains. I felt like I was actually there! And, for me, it brought back memories of my trip of a lifetime which I took to Morocco a couple years ago. About halfway through I actually stopped the book and looked for images of the interior and when I found them it looked exactly like I pictured it. And I found photos on my hard drive from that trip to Morocco which were exactly like the Alhambra. I was so thrilled to know that Irving had drawn the picture so perfectly in my mind that it matched exactly what I had seen before and what I found online. It is no wonder that this book is sold in Granada. What an accomplishment for an American writing in 1831!

Where does Tales of the Alhambra rank among all the audiobooks you’ve listened to so far?

The lyric quality of the writers words

Have you listened to any of Ralph Cosham’s other performances before? How does this one compare?

No, but he has a euphonious and elegantly paced reading voice expressive and allowing the listener hours of story without listener fatigue

What wonderful words and expressions the early nineteenth writers employed to paint vivid pictures of their travellings
The name of Washington Irving while famous in his era circa 1830,s is probably not that well known today, but what is certain is that his mastery of the English language albeit he was american,was superb. Whatever has been the advances in our present English, I recommend listening to this delightful prose to fall in love with the language as it was written 180 years ago!

After visiting the Alhambra in person. I was amazed at the mystery and beauty that building has. I was eager to learn more and now in earnest to return there one day.

If you have had the pleasure of visiting the Alhambra, listening to this will be magic. If you listen to it before you get there, you will see much more than I saw in my own nine visits.

An enjoyable, easy going book recounting old stories and legends of the Alhambra, Granada, and characters. It all feels somewhat akin to 1000 Arabian Nights as a series of entertaining old tales is told.
The narrator has a very calm voice and excellent elocution.
Nothing riveting in the stories. Just nice and easy.

I love Ralph Cosham and had just finished The Alchemist and A Thousand and One Nights and so thought I'd enjoy this. A bit too slow for me and the language is pretty out dated being written in the 1830's(?). Good for another time maybe.

The Wonderful Magic and History of the Alhambra!

I have just returned from visiting the Alhambra in Granada, Spain. What a delight to hear Washington Irving's stories of the time he lived there and also the magical, mystical tales of Granada! I enjoyed the voice of the narrator too.

I enjoyed this book as much fior the content as the sound of the narrator's voice!

An interesting place, The Alhambra...

It was interesting to read about Spain and the Alhambra as it was so long ago. The characters are well drawn, the stories are fascinating. My only complaint would be the lisp and monotonous tone of the reader. That almost put me off when I first started to listen to the book. I would still recommend it, I did get used to reader eventually.