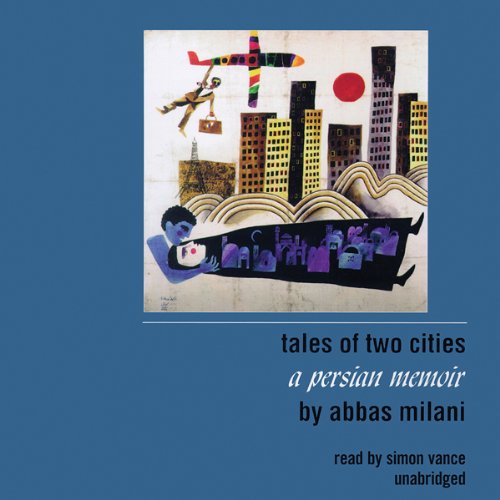 Born in 1949 to a prosperous family in Tehran, Abbas Milani grew up in an Iran of culture and tradition. He was sent to the United States for his studies, and it was there that he made his transition to adulthood, becoming active intellectually, sexually, and politically. Flush with 1960s idealism, he returned home in 1975, only to find his country utterly changed. His intellectual activities soon landed him in prison, and as his country crumbled before his eyes, he reluctantly moved back to the US permanently in 1986.

Milani’s impassioned memoir of coming to terms with the fate of his country is a loving account of the traditional Iran of his childhood, a painful portrayal of a generation of Iranians torn apart by their country and its politics, and finally, a message of hope, as he proves, in the end, that despite his hardships, he has achieved fulfillment in exile.

Yes I wouldThis book recounts the intimate events of the life of the author around the time of revolution. However, the author's well written analysis of the events that lead to the revolution and immediate aftermath of it in addition to his thoughtful description of the personalities that he encountered during those years provide an invaluable insight into the mind and philosophy of those currently in power in Iran. This is a must read (listen) for anyone who is interested in making sense of the iranian revolution and its inner workings.

What was one of the most memorable moments of Tales of Two Cities?

The authors account of his incarceration and encounters with interrogators and prisoners.

He mispronounced most of the persian words but his soothing and effective English reading was more that compensated for that.

Wonderful insight into a culture that many do not know or understand. Thanks to the author for sharing so many of his personal thoughts.

Loved it - Thanks you Abbas Milani and Simon Vance

Captivating writing by Abbas Milani and great narration by Simon Vance. I ordered more of Mr. Milani's books, unfortunately they are in hard cover and not offered by Audible. I would love to hear other books by Mr. Milani with Mr. Vance's narration. I wholeheartedly recommend this book. What an honest and heart wrenching depiction.

Glad that this book has been written.

I started listening to this book and was not able to stop until it was finished. My own life mirrors much of the story. Through it I was able to understand my own narrative. Thank you for writing this book

Abbas Milani is the grandfather of Iranian studies in America and the heart and soul of his generation of the Iranian diaspora. His life and struggle is not just a personal history, but a history of the nation's piecemeal lurch into Western style modernity and the ravages of the Islamic Revolution and the war with Iraq. It's a bittersweet journey that gives Americans such as myself a first person peak into a land we most likely will never see because of the hostility and suspicion of the Islamist regime, lack of US-Iran relations and embassies, and for America, a self imposed ignorance of Iranian culture and language. In America, where the dedicated study of Iran has all but disappeared, this book is an argument for more study and renewed diplomacy.