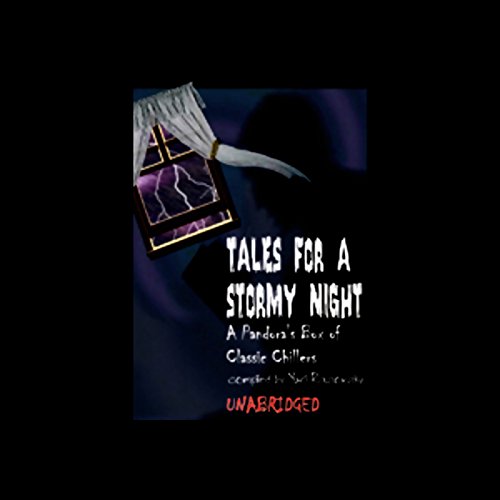 It's midnight. Turn out the lights, cuddle with your true love, and shiver to fright-meisters Edgar Allan Poe, Robert Louis Stevenson, and H. P. Lovecraft. Quicken your pulse with the elegant terror of Henry James, Edith Wharton, and Guy de Maupassant. Chortle at the black glee of H. H. Munro and Ambrose Bierce.

This volume of late-night listening is for lovers of mischief, the macabre, and literature. These 15 tales, plays, and poems, gleaned from cultures around the world, range from wickedly comic to deathly serious, from New England reserve to Gallic passion. We have even disinterred a previously unpublished tale of revenge by the neglected Bostonian Charlotte de Quincy, "Perfidy and Perfection."

Befitting this varied fare, the presentation is a witch's brew of readings and dramatizations, seasoned tastefully, and (where appropriate) not so tastefully, with music and sound effects, under the direction of Yuri Rasovsky, Peabody and Audie Award-winning producer, and his coven of 20-odd (some very odd) performers.

From Japan comes "Mimi-Nashi-Hoichi" by Lafcadio Hearn; from France, Maupassant's "The Horla"; from Eastern Europe, "Bonche the Silent" by I. L. Peretz; from Ireland, William Butler Yeats's one-act drama "Purgatory"; from Scotland, Stevenson's cadaverous "The Body Snatcher"; and from merry, or, in this case, morose, old England, Munro's catty "Tobermori", plus "Something Lies beyond the Scene" by Dame Edith Sitwell and composer William Walton.

America is well represented by Poe's intoxicating "The Cask of Amontillado" and "The Fall of the House of Usher"; Bierce's homage to lethal entrepreneurship, "Oil of Dog"; Lovecraft's necromantic "The Terrible Old Man"; and two tales of haunted real estate, "The Ghostly Rental" by James and "Kerfol" by Wharton.

Shut your eyes and give your mind a listen, if you dare.

©2003 The Hollywood Theater of the Ear

"By embracing multiple genres and tones, performance styles, and national literatures, this audio Pandora's box consistently stimulates, surprises, satisfies, and even stretches our sense of what an audiobook can be." (AudioFile)

This collection is uneven at best. Some of the narrators are excellent, but most are forgettable. A few are the auditory equivalent of a migraine.

Note: The "unabridged" description on the graphic is frankly incorrect. Many of the stories are badly dramatized, i.e., Saki's "Tobermory." The Poe stories are dramatizations just short of Cormanesque camp.

The worst offender may be Lovecraft's narrator, followed closely by Bierce's.

Charlotte de Quincy's tasteless porno-satire is strangely out-of-place. I had this title playing on the computer and had to turn it off because of my children; fair warning about that.

It was Wharton's "Kerfol" that attracted me to the collection; the narrator is excellent. "Hoichi the Earless" and "The Body Snatchers" are well-done.

Because there is so little to recommend, I can only give two stars and wish you better luck with your own selections.

I love horror stories (new and old), but have to agree with the other review. The stories are boring and the narrators annoying. Don't waste your time on this one.

Outstanding collection of tales. As stated, great to listen to on a stormy night. Some of the narrators are superb, but all are at least very good. These stories are among the best you will hear on audible.

Scary to listen too, not in a good way.

There are some fantastic stories here. Unfortunately many of them are painful, rather than frightening, to listen. Of particular note are the near-hysterical reading of Wharton's Kerfol, and the perhaps the worse Scottish accents ever committed to tape on The Body Snatcher.

Good, classic tales, some of which were new to me. American stories well read, but I’m afraid the British accents are frequently rather toe-curlingly flaky.