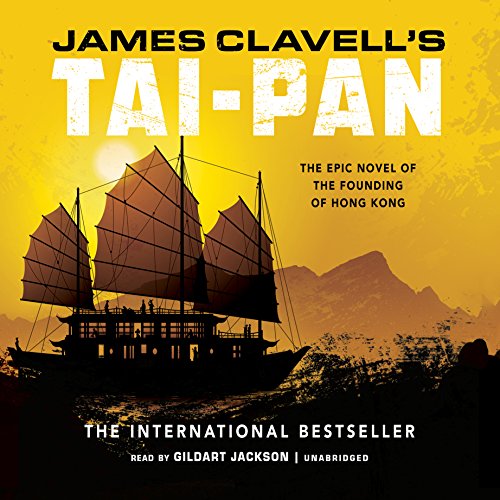 It is the early 19th century, when European traders and adventurers first began to penetrate the forbidding Chinese mainland. And it is in this exciting time and exotic place that a giant of an Englishman, Dirk Struan, sets out to turn the desolate island of Hong Kong into an impregnable fortress of British power - and to make himself supreme ruler: Tai-Pan!

New narration, MUCH superior to the older version. Possibly Clavell's best historical novel and Gildart Jackson does it justice at last.

This book is a masterpiece only outsone by the narration which is breathtakingly vivid. Totally absorbing.

Great performance, albeit overacted on occasion

The novel was as epic as I remembered from my youth, and the reading brought excellent life on the characters. The voices beyond the reader's own scale (namele women and children) were often overacted and might have been better if read by a female, but overall score is five stars and an extra star sticker for effort.

I missed such great writing as Clavel presents in his books, and Jackson complement it perfectly with his unique narrative of each of the dozens of chief characters in the book. Truly amazing.

One of the greatest novels ever written, told most masterfully.
Looking forward to listening to this marvel once a year.

What a book!
What a roller-coaster!
Superb reading like Shogun snd King Rat
So very emotional

epic.wow..not as good as Shougon,but great. GIldart J. does a superb job. lovely and so long,seems never ending....

Wonderful narration - no, performance by God! - of a complex and intriguing story. A rare feeling to feel sad that a book has ended, and rarer still to envy those that are yet to enjoy it.

It takes a while to get into the characters of this novel, but once comfortable with who's who, you can enjoy Clavell's storytelling. This novel is not as good as "Shogun," as the atmosphere is not as thick with the relevant oriental culture. But it's still enjoyable. The storyline meanders a bit and, I have to say, the ending is a little bit of a let down. But you can't expect perfection every time. Jackson's narration is first rate, though. He adapts to the characters really well, and allows you to follow the action and dialogue quite easily. "Heya!"

The best audiobook ever....

I don't normally leave reviews but this book stands out so much that I had to. I've listened to many audiobooks over the years but this is the best I've ever come across. It's a big statement but for me all boxes were ticked. The story is excellent- full of action, intrigue, subtleties of human nature and fantastic historical connotations of the time and all things naval. However what really makes this book stand out is the narration- Gildart Jackson is a genius at work. I've never heard a narrator display such a great command of so many roles making the story flow and the characters really come to life. Quite simply a work of class. Hope everyone enjoys it as much as I did.

Where does Tai-Pan rank among all the audiobooks you’ve listened to so far?

This is one of the best I've listened to.

Have you listened to any of Gildart Jackson’s other performances? How does this one compare?

No, I have not. But Gildart's characterisations are amazing. I would not hesitate to listen to this again, comparing it favourably to the voices on the other Clavell novels.

James Clavell writes an absorbing Boys Own Paper type of saga, full of swashbuckling characters against a real historical backdrop. The narrator is extremely good with accents, especially the main Chinese female voice which had me laughing out loud at times.

I read the book years ago and had forgotten most of it so it was a treat to escape once again into the world of the Noble House. Great beach listening!

I've been delighted to find Clavell's books on audio, having read them when I was much younger. Tai Pan is a rollicking good story, with really strong characters (Dirk is a bit like Reacher - men want to be him, women want to be with him!). The narration was excellent, given the variety of characters in the book, each with such specific country/cultural backgrounds. Even the Scottish dialect was reasonable, since it usually gets mangled by narrators unless they are actually Scottish!

Excellent value for money too - got this as one of my 'monthly subscriptions', getting more than 30h listening.

thought I might get annoyed with the narrator but persisted and ended up really enjoying his style . The story is just great accepting the plausibility of fictional ! highly recommended.

a masterpiece, better than shogun of which over 40yrs I read watched on tv and have listened to since joining audible nearly 3 yrs ago. the intenseness passion history violence are exquisite, the reading masterful, and the final tumultuous chapters reached such emotion inside I cried. to look upon this island city now and imagine it's once frail beginning will haunt me each time I see her or hear of her.

breathtaking story. James Clavell at his best.
Fantastic performance.
I highly recommend this series of books

An absolute classic by God!

Brilliant story with brilliant narration . if you can't enjoy this one you need to be tied to the mainsail for a good flogging!

Great book - but 6 stars for narration!

James Clavell's epic novels are excellent. But listening to this audio book what is even more amazing is that it's read by one guy! Outstanding

Love, action and intrigue... this is an excellent listen

Clavell is entertaining, varied and complex - and there is action, love and intrigue in this mammoth work. His knowledge of current affairs and culture of the period is extensive and he achieved an outstanding degree of preparation.
As a novel, Taipan isn’t as “tight” as Shogun; there are chapters that lapse and moments that are predictable but it’s imaginative w a great historical canvas upon which the storyline of the China traders, and hero Dirk Struan is laid.
There are so many characters that the narrator wisely chooses fewer (....and that’s still many) to ensure consistency. This is an excellent listen !