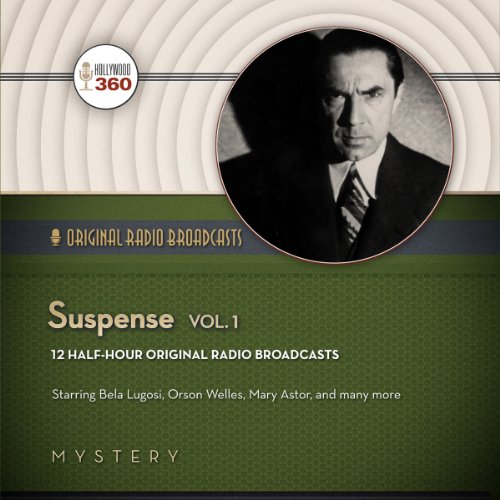 A thrilling collection of episodes from the classic radio show Suspense.

Conceived as a potential radio vehicle for Alfred Hitchcock to direct, Suspense was a radio series of epic proportion. It aired on CBS from 1942 to 1962 and is considered by many to be the best mystery series of the golden age. Often referred to as "Radio's Outstanding Theater of Thrills," the show focused on suspenseful thrillers starring the biggest names in Hollywood. Early in the run, the episodes were hosted by the "Man in Black" who, from an omniscient perch, narrated stories of people thrown into dangerous or bizarre situations with plots that, at the very end, usually had an unseen twist or two. Hollywood's finest actors jumped at the chance to appear on Suspense,including Cary Grant, Jimmy Stewart, Alan Ladd, Henry Fonda, Humphrey Bogart,Bette Davis, and Orson Welles. Scripts were by John Dickson Carr, Lucille Fletcher, James Poe, Ray Bradbury, and many others.

Episodes include: "The Cave of Ali Baba," "The Hitchhiker," "The Kettler Method," "A Passage to Benares," "One Hundred in the Dark," "The Lord of the Witch Doctors," "Will You Make a Bet with Death?," "Menace in Wax," "The Body Snatchers," "The Doctor Prescribed Death," "In Fear and Trembling," and "Fire Burn and Cauldron Bubble."

These a gripping old radio thrillers made in the 1940’s. I am surprised with the quality of the storylines which I find haunting, creepy and full of “suspense”! You do not get this type of genre any more, unusual storylines with a twist with each one pure theatre, not like today’s which are far too modern and hollow. These use theatre for what it is DRAMA using human paranoiac tendency’s felt deep in all of us. I have both series of suspense and would like more.