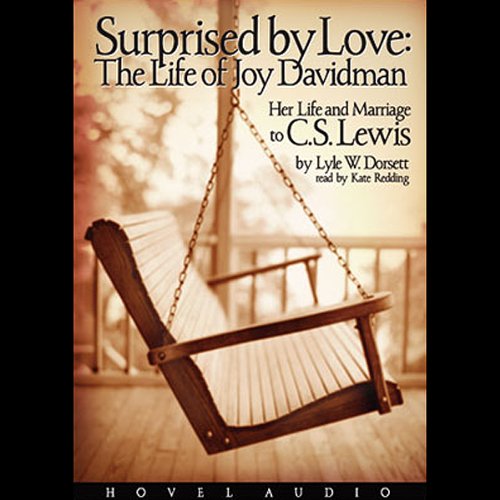 In late 1956, an item in the Times of London stunned England's literary set. Confirmed bachelor and celebrated Christian apologist C.S. Lewis announced his marriage to Joy Gresham. His choice could not have been more unlikely.

Joy was an American, a divorcee, an ex-communist, and a former atheist. Yet this extraordinary and fascinating woman made a great impact on Lewis and his writings in the short time they had together.

a clearer picture of Davidson

I feared that this would be overly sentimental and pious, but it is a good bio, using many primary sources. And it is Davidman's bio, not that of Mrs. C.S. Lewis. Although touted as the story behind the movie Shadowlands, it's much more comprehensive; in the intro to a second edition, the author clarifies a couple of fictions in that movie.

The bio is written with obvious fondness for Davidman and well-narrated by Reading. The book makes a good companion to Alan Jacobs' brief bio of C.S. Lewis, The Narnian, in which a slightly different interpretation is given to some of Davidson's relationship with Lewis.

Given that the facts are accurate, this is a captivating and engaging biography. For those of us who have always held Christian beliefs - but need frequent prodding to stay on track - it is remarkable to read of a transformation such as was Joy's. I am completely overwhelmed with curiosity to read more of both C.S. Lewis and Joy Davidman (as well as others mentioned in this story) - and am certain that at some point they will come to know how many lives they touched, even after death.

Although I've listened to and read everything about C.S. Lewis that I could find and many of them mentioned the impact that Joy Davidman had upon him, this was the first book that gave enough information about her to understand why they became such great friends long before they fell in love. The narrator, Kate Reading, was marvelous in being able to voice the characters. I also gained insight into Warnie, C.S. Lewis' brother, who comes through as much more supportive of Jack and Joy than I ever before imagined. This is an excellent book for anyone who really wants to understand the man behind the legend and the woman who inspired him during his writing a book on the Psalms and his re-envisioning of a Greek story entitled, Until We Have Faces.

The real story can be even better than Hollywood

Pretty much everyone has heard of CS Lewis or at least his Naria stories or a couple of his non-fiction books (Mere Christianity, Screwtape Letters, The Great Divorce, etc.) Except for the two movies, I only saw Shadowlands, most people know nothing about Joy Davidman. Lyle Dorsett wrote what I believe is her only biography. It was on this short biography that both movies drew heavily. The reason that there are three different editions of this book is the popularity of the two movies. So it is interesting to me that Dorsett wanted to re-release the book to counter the misperception created by the movies.


Joy Davidman lived an extraordinarily life. She was born to two very driven second generation Jewish immigrants. Her father, a teacher and later principal, pushed Joy very hard (while virtually ignoring her slightly younger brother because he only had a 147 IQ and "would never amount to anything because he was so slow.") Joy was reading by 3, graduated from high school by 14, entered college at 15, started teaching middle school at 18 and started her masters at 19. By her early 20s she was the editor of a communist paper, had a Yale edition of her poetry published and a successful novel.

I won't give away the main story. I have seen the Hollywood version of the story (not the BBC version) and while it gets much of the basics right, there is so much more to the story. This is a book that I wish were twice as long. Dorsett is a wonderful writer and knows how to both capture the beauty and the spiritual vitality of his subjects without veering into inappropriate veneration of them.

A longer review is on my blog at bookwi.se

What a wonderful true story of a briliant woman who was an amazing writer in her own right. This book brings the life of C. S Lewis full circle. It indeed tells of a wonderful love story.