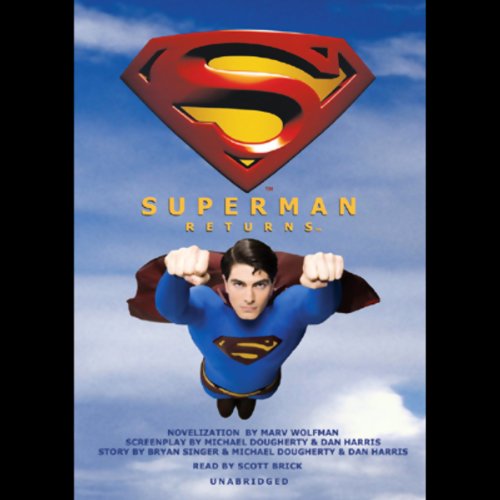 Following a mysterious absence of several years, the Man of Steel comes back to Earth in the epic action-adventure Superman Returns, a soaring new chapter in the saga of one of the world's most beloved superheroes.

While an old enemy plots to render him powerless once and for all, Superman faces the heartbreaking realization that the woman he loves, Lois Lane, has moved on with her life. Or has she? Superman's bittersweet return challenges him to bridge the distance between them while finding a place in a society that has learned to live without him. In an attempt to protect the world he loves from cataclysmic destruction, Superman embarks on an epic journey of redemption that takes him from the depths of the ocean to the far reaches of outer space.

I couldn't want to see Superman Returns... and so I purchased this book.

I found, from my expereince with Star Wars Ep III, that if you read the book based off the movie, it actually makes the movie much better. Versus reading a book and watching a movie based off the book, which ruins it.

Well this book is based off the movie, and it's great! It's just like the movie word for word, except that it gives you extra scences inbeteween the movie scenes that better explain things that the movie eludes too. You get to know what everyone is thinking... then when you go see the movie it's even better cause you know the little things.

Great book, the speaker is great too! Good voice. At first I wasn't sure about his voice, but as it went on it got better and better.

I don't know what I expected from a book based upon the movie. Anyone who's seen the movie has essentially read the book. Although Scott Brick does his normally excellent job of vocalizing the story - the story suffers from the same lack of focus as the movie. The difference? The movie is much shorter. The audiobook does offer some additional detail which is either glossed over or excerpted from the movie, but is hardly worth the additional hours. If you're a Superman fan, you'll listen to the book anyway. If not, the movie will likely fill the void for you.

Better than the movie

I thought that the Superman Returns was an OK movie, but this audio book really improved it. The additional material, especially the explanation of why Superman went back to Krypton in the first place, was much better than the no explanation at all in the movie. Also, unless I'm remembering it incorrectly, the movie kept hinting that Superman might the father of Lois' son. This book wisely steers away from that bit of soap opera.

This book was enjoyable. However, it feels like a screenplay adaptation. That is not necessarily a knock against it, because if read (ie “listened”) as a companion to viewing the movie, it provides a number of details the film simply does not have time to cover. Despite it being a screenplay adaptation, it apparently was not given permission to reveal the Movie’s major plot revelations. Let’s just say the movie is quite different at times…crucial times.

must read for a superman fan!

WOW! Is the first thing I have to say about this book!! when superman Returns came out oh so many years ago I can honestly say I didn't get it. reading Marv wolfmans version in novel form I have a much better understanding of the vision they were trying to produce. the movie fell short in so many areas but this book explains it all in a way that you can understand.

I still maintain it's not "my" superman and I don't understand things like Lois having a random kid that may or may not be Superman's but from the book you can see where they were going.

Better than the movie, but still not great . . .

Superman Returns is better than the movie that it follows. I thought this novel started quite strong but petered out to a dull roar. I will provably listen again to Kal-Els journey to Earth and his journey back to Krypton. These are the only, truly original parts of the novel and they truly shine. The rest of it is a slightly-improved version of what you saw on the Silver Screen. It is sad, because I had hoped for a different ending over what happened in the movie. That is not what happened.

The novel improves to the movie in three ways: First, baby Kal-Els journey to Earth. Followed by Supermans Return to Krypton. Which explain what happened. Finally, you get right inside the heads of the major characters and can understand why things happened the way they did. They are nice additions to the story and make it more approachable for people who are not well versed in what happened in the Superman Movies.

However, there are some major flaws with this novel. These flaws are the same flaws that plagued the movie. First, Lex Luthor has all the knowledge of the known universes and all he thinks of to do with it is make land? This is not the Lex Luthor I love to hate. Was it necessary to bring him back like this? Why did Superman leave in the first place? The novel attempts to explain why, but just seems like a plot device over a true reason for him to leave. And why is Lois Lane NOT with Superman? It has become an integral part of the story of Superman. Its like not having Mary Jane end up with Peter Parker; it just leaves a bad taste in your mouth. If he loved her so much, why didnt he stay?

It is a shame that this novel is not better than it is. It is still worth a listen, but it will not be something you will cherish forever.

There were a couple inconsistencies with the book that they fixed in the movie. As far as the quality of the book, it was an easy listen.

This book is just as bad as the movie was

good book but different to the film. it's better

good book but different to the film. it's better
couldn't put it down listened when ever I could

better than the film