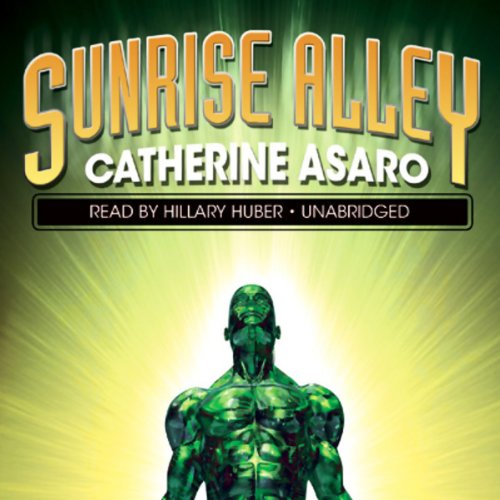 When a shipwrecked stranger washed up on the beach near research scientist Samantha Bryton's home, she was unaware that he was something more than human. He said his name was Turner Pascal - but Pascal was dead, killed in a car wreck. This man only held the remainder of Pascal's consciousness in a technologically enhanced humanoid body. He was, in fact, an experiment by the notorious criminal Charon, a practitioner of illegal robotics and android research. Charon has been secretly copying human minds into android brains, with plans to make his own army of slaves.

On the run from this most ruthless criminal, Samantha and Turner seek help from Sunrise Alley, an underground organization of AIs and androids that have gone rogue. But these cybernetic outlaws are rumored to have their own hidden agenda.

If the heroine and hero got kidnapped and then escaped ONE MORE TIME I was going to stop listening! I know it's fiction, but geeez!

I did enjoy the technology described in the story, I found it believable for the era, original and intriguing.

I did not enjoy the narrator so much. I felt she made the heroine's voice too sweet. Make me not like her just because each time she talked it sounded fake, like someone trying to be over feminine.

A good romance. Not science fiction.

I read or listen to science fiction to get inspiration. I love it when a book can present concepts that both challenge me and interest me. When an author can go into some depth with one or more of their concepts and make me believe that it actually might happen some day, then a book is worth my time. This book has none of that. The main emphasis in this book is a womans adventure in falling in love with an android who has been programmed with the mind of a man. None of the concepts, while interesting, were expanded upon to any degree. There simply was no science to this book. There was however, many insights into a womans mind and her emotional states. The main character is a scientist however, she never really applied any scientific principals during this adventure. This book was well written and it deserves its due, but it belongs in the romance section, not the science fiction section.