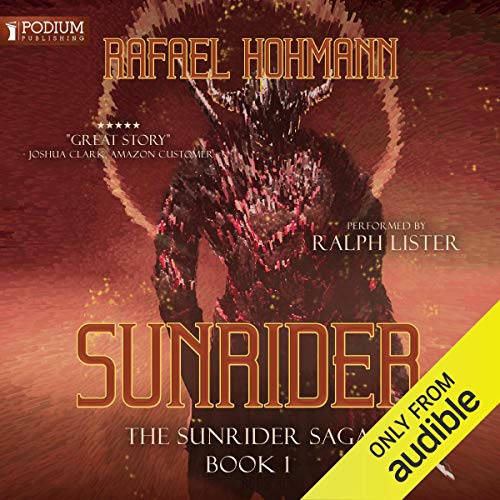 Magic pieces of armor rain from Lenova's skies, granting men God-like powers. Mountains move, lightning bends to command, and a man's future can be written in a book before it's even happened.

In this emerging chaos, teenage Finn SunRider cares only for escaping the burning desert of the Crust and exploring the world he lives in. Yet that will prove quite difficult with monsters and tyrants roaming the land, conquering cities and killing the innocent.

With a Sorceress and her evil Lich master rising from the South, and with an ancient mysterious artifact grafted onto Finn's arm, he's ended up getting a lot more than he bargained for.

From flaming coal-coated vat-worms and two-directional streams to floating cities and underground pyramids, follow a fantasy journey of epic proportions!

Very entertaining and written in a way to draw you in. Descriptive and engaging. The main character reminds me a little of Rand Al’thor in the beginning of the wheel of time series. Great moral character and many hints of what the character will blossom into. The Narrator did a great job of making you feel the excitement and suspense of the action scenes. I’m excited for the series to continue.

It was really hard for me to even this book.

The story is not captivating at all, and I love slow burn books.

struggled to finish it. too long . you don't find out what you want to know

subpar, not worth the time.

I really wanted this story to give a better showing than it did. but aside from being plagued with weird pacing issues, and an unlikable secondary POV character that takes up about 1/3 of the "screen time," this book just never delivers. The ending is unsatisfying, the fight scenes lackluster. I only could justify a 2 star review due to the excellent narration.

I absolutely LOVED it!

A unique and not off the wall story! It was told in a way that everyone could imagine it actually happening. I really enjoyed and wanted to find more from this author.

Please Mr. Rafael Hohmann, write more in this genre as it was truly amazing! Refreshingly new with no borrowed words, phrases or ideas stolen from other writers, that's all I'll say!

The story is good but the main character is too weak mentally and physically in my opinion. It’s frustrating that the MC didn’t seem to take action much but his friends did majority of the work for him. I wouldn’t recommend this book even though the narrator and story was somewhat good.

I had hoped that the figure on the cover was the MC. I will never know. Details. Details. Details... This one nails it! it is all in the details. The first installment is all about the characters development and sets the backdrop for future books I suppose. Not willing to wait for the MC to grow up.

No other series has left me on the edge of my seat yet satisfied the need for a good story like this one.
The story is unique, the plot unlike any other. I highly recommend this book and the two that follow!

I had trouble with this one.

The grand concept is one I really love and have thought about many times. The idea of artifacts of great power shaping history is really fun.(I love the night angel trilogy)

But I have tried to get through this for a while and it never clicked. I think in part the main character just feels like a child most of the time, with little growth.

This might have been a drawing point sometime before I hit 30, but now he's just a bit annoying.
I don't think the writing is bad, but I don't feel inclined to read the next book.