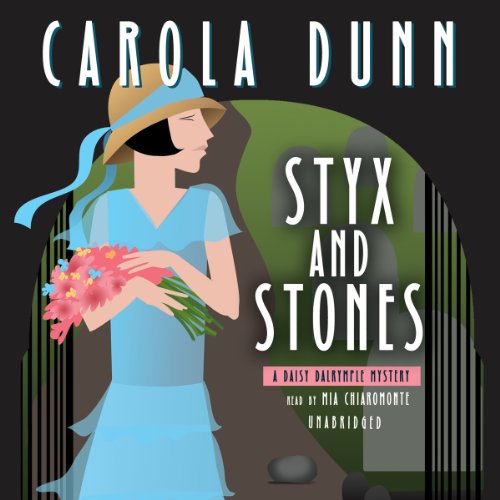 In the 1920s, in post - World War I England, the Honorable Daisy Dalrymple, newly engaged to Detective Inspector Alec Fletcher, is asked by her brother-in-law to discreetly investigate a series of poisoned pen letters that many of the local villagers have been receiving. When the pompous and unbearable brother of the local vicar is killed by a very large rock, dropped on his head from a great height, it seems clear to all that this campaign of gossip has escalated to murder. With the help of her husband, who'd rather she not get involved, Daisy tries to uncover who wrote the letters and who that person has driven to murder before the killer strikes again.

This starts slow and is quite tedious and filled with way too many characters.

What was most disappointing about Carola Dunn’s story?

Its a tad boring and hard to get into.

She isn't really that good and distracts from the book.

Do you think Styx and Stones needs a follow-up book? Why or why not?

Lord no. Enough is enough.

It was fine. I got through it. Not my favorite Dalrymple story.

Please find a different narrator for this great series of books! I've long been a fan of Carola Dunn, but the narrator of this one and at least one other is just awful. Not only does she have an affected inaccurate fake English accent (it would be better to have someone without an English accent at all than this fakery), but she also doesn't know how to pronounce a lot of words properly, especially proper nouns. For example, the South African town of "Mafeking" is NOT two syllables, but three, something anyone with the slightest knowledge of the Boer (another mispronounced word) War would know.

Does anyone coach or edit narration?

The Daisy Dalrymple stories are light fare and nice for summer listening, even though the narrator is not one of the best. I can get past the odd accents and so-so character voices, but the many mispronunciations are jarring. Whenever I hear "mis-CHEEV-e-us" instead of "mis-che-vus" I want to scream, even though that pronunciation is now so common that it is practically acceptable. However, saying "indignant" instead of "indigent" is just sloppy narrating and editing. Then there was "bun-GAL-low" for bungalow and the pronunciation of "consommé" was so bad the first time I couldn't figure out what the word was supposed to be (although that might have been in a different DD book with the same narrator). I know that it must be very difficult for a narrator to created different voices or accents for different characters, but if narrating audiobooks is your profession you should be able to pronounce basic words correctly.

Good plot.
I wish this narrator had performed all of the Daisy Dalrymple books. Well Done

Generally I liked this book but I think some of this is a bit more predictable than others. I don’t think the treatment of the religious people was badly written at all, those that complain about that need to get the plot. This wasn’t a general indication that the author considers the clergy all to be crazy! Alec’s reaction to Daisy involving his daughter in the trip and investigation was too over the top and ridiculous, I found it tedious, especially since she didn’t do anything of the kind.

I forgot why I quit the Daisy series - now I remember. The story started fine, but I couldn’t finish it. The narrator has such an affected tone and odd accent - she sounds like my 9-year old pretending to be British. She also narrates too slowly. All the characters come off sounding like they’re in a lame joke. Daisy used to seem like a good lead, now she just sounds stupid. Although with the narration, all the characters sound like idiots. If you like the Daisy books, pick one narrated by ANYONE else. Unfortunately ruins what is probably a fine book.

Sorry, no more Daisy Dalrymple for me!

This book was so disappointing. I enjoy reading strong female lead characters but in this book, all the strong female leads were either domineering pigs or uncaring adulteresses. Women from small villages were all uneducated rationalist, while educated male artist from the city were enlighten. And last but not least, people of faith were mentally unstable killers while atheist were educated victims. Did I leave anybody out . . . Oh and I forgot, high ranking military men are drunken abusers. This book was so unbalanced that I stopped it several times and only finished it in hopes that it would at some point turn around and redeem itself. I think this book had an agenda which made it suffer in the writing of it. If the rest of the series is just going to be social agenda lessons, this is my last book by C. Dunn.

This one was OK.

I was sort of disappointed that once again a religious person was depicted in such an unfavorable light.
the story was otherwise pretty good.

I love listening to these books. They are very enjoyable. Mia Chiaromonte did a great job with the different voices. I recommend this and the other Daisy Darymple books.

Where does Styx and Stones rank among all the audiobooks you’ve listened to so far?

This is a reasonably entertaining audiobook.

I liked the early twentieth century setting in England.

Would you listen to another book narrated by Mia Chiaromonte?

I found although her voice is pleasant that her mispronunciation of certain words, particularly the vowel 'o', did jar on me. This may be the difference between British English and American English.

It's annoying reading the book that is supposed to be English people talking when American words are used such as braid instead of plait, but to then listen to the audio and find it's an American accent too is so frustrating! Why set a book in England showing the different classes yet have an American reading. Couldn't finish listening, it was driving me mad!!! Next time, Carola Dunne should stick to setting books in America!!!!

It is good lighthearted adventure and I found myself vexed at the heroin on more than one occasion. To the point where I was on the verge of shouting and was gesticilating in frustration with her. Each character has been written with empathy and integrity. I found it a little slow to get going however that is purely subjective. All in all a good read or should I say listen!

I like the series and on the whole got on ok with the narrator however i was really confused at points by some of the pronunciation choices. Left me wondering if it was a slightly off accent attempt. I prioritises story over voice so it was not too irritating and perhaps people really did in the upper aristocracy of the time say peeq when they were saying the word piqueete. Worth listening to the sample to double check if you will get on with the voice.