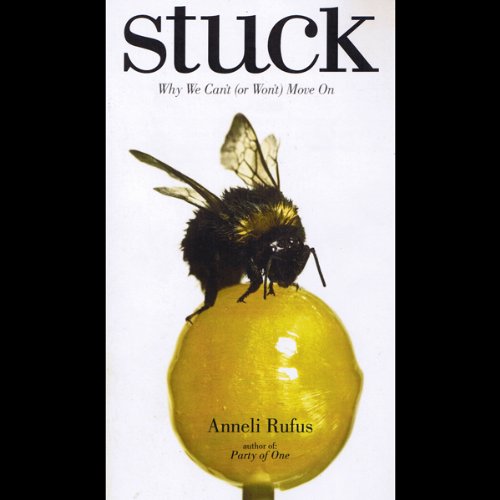 In Stuck, Anneli Rufus identifies a rather striking social trend: many people are stuck. Be it in the wrong relationship, the wrong town, or with the wrong friends, many of them even say they want to make a change but...somehow...never get the job done. Blending personal anecdote, interviews, and cultural criticism, Stuck is a wise and passionate exploration of the dreams we hold dearest ourselves -and the road to actually achieving them.

Tracing the many ways in which American culture conspires to keep us stalled, Rufus delivers a long-awaited diagnosis for our day and age. But there is a light at the end of the tunnel (at least for some): Rufus also tells the stories of people who managed to become unstuck or of others who, after much reflection, decided that where they are is best. After all, she says: "What looks to you like paralysis, looks perhaps to another like passion. What looks to you like a rut, others might say is true absorption in a topic, a relationship, a career, a pursuit, a place. What looks to you like boredom, others call commitment. even contentment." A rare glimpse into what truly motivates - or doesn't motivate us - Stuck inspires readers to take a look at themselves in an entirely new light.

I feel stuck having read this

The author is probably prepared for criticism but the book reads like a petulant rant.

this book is very informative. I see myself and others in the different chapters. Chapter 4 was very difficult.

What would have made Stuck better?

Has Stuck turned you off from other books in this genre?

Would you be willing to try another one of Susanna Burney’s performances?

I liked the cover and the title.

I did rush into getting this book. Unfortunately, I was looking for something much more advanced. This may be helpful to a middle school maturity level.